From left: Francis and Claire Underwood, Clare and Francis of Assisi

Disclaimer: season 1 spoilers ahead (but it’s been a year already, so that’s on you)

Season 2 of House of Cards was released yesterday on Netflix. In sticking with Netflix’s formula, all the episodes were released at once, prompting a flurry of binge watching over the weekend (which yours truly will no doubt participate in). The show combines two of my favorite things: breaking the fourth wall and craven political drama. Despite its being Netflix’s first real bid at “prestige television” (a la The Sopranos, Breaking Bad, Mad Men), it’s not so much a great show as a soap opera with higher production values. I enjoy it nonetheless.

One small thing I found interesting in the adaptation of the UK show House of Cards to the US is that while they kept the first name of the main character the same (Francis, played by Kevin Spacey), they changed his wife’s name from Elizabeth to Claire (played by Robin Wright). I assume this came from some unconscious sense that “Francis” and “Claire” simply go together as names, but even still the linking of those two names comes to us from Francis and Clare of Assisi. And while this more holy “power couple” might be a strange lens through which to see the political power couple, Clare of Assisi is the patron saint of television, so why not. 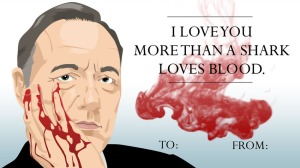 In what is probably the most famous line from the show, Kevin Spacey says “I love that woman. I love her more than sharks love blood.” While you might have seen this on some Valentines cards yesterday, it is not quite the sentiment most of us look for in love. His sense of love is predatory, and the only people he respects are those who are both competent and ruthless. Complementary to this, Claire’s best line is “my husband doesn’t apologize. Even to me.”

By contrast, the love of Francis and Clare of Assisi was not borne of manipulation or the desire for power. Rather, as Leonardo Boff puts it, “The love for Christ and the poor did not diminish at all the deep love that united them, showing that between people who dedicate themselves to God and serving others, there can be true love and relationships of great tenderness.” This mutual call to give of themselves to God and to those in need was the foundation of mutual admiration, respect, and love.

Power
House of Cards begins with the election of a new President who had promised Secretary of State to Francis Underwood, but then breaks that promise in order to keep Underwood in the House. Thus begins a complex, brutal, and at times strangely elegant plot in order to gain even greater power for himself. Throughout the show, Francis Underwood is focused on increasing and consolidating his own power. At the new President’s inauguration, he tells the audience “Power is a lot like real estate. It’s all about location, location, location. The closer you are to the source the higher your property value.” Proximity to power is the rubric through which Underwood understands value.

Unsurprisingly, Francis of Assisi has a different view. Instead of power, Francis focuses on proximity and poverty. In The Little Flowers of St. Francis, he says “For poverty is that heavenly virtue by which all earthy and transitory things are trodden under foot, and by which every obstacle is removed from the soul so that it may freely enter into union with the eternal Lord God…It is she who accompanied Christ on the Cross, was buried with Christ in the Tomb, and with Christ was raised and ascended into Heaven.” Poverty “guards the armor of true humility and charity,” bringing us closer to the true source and summit of power, God. In fact, for both Francis and Clare, poverty means total dependence on God. By contrast, towards the end of season 1, Francis Underwood says “I pray to myself for myself.”

Generosity
Francis Underwood claims that “Generosity is its own form of power.” Giving to another becomes a way of asserting dominance over them. In Underwood’s case, this is part of an economy of favors that underlies politics – an economy he benefits from sometimes but abuses when he thinks he needs to. Among the many times this is on display is in his relationship with his Capitol Police bodyguard, Edward Meechum. Meechum had been fired for discharging his weapon in a populated area. After imploring Underwood to “put in a good word for him,” Underwood did so and ultimately got Meechum placed permanently on his detail. Nonetheless, it was generosity in the sense of power, as Meechum becomes his unquestioning enabler in his affair and other endeavors – what Underwood calls “a rock.”

Francis and Clare of Assisi, by contrast, were both known for their generosity. Key stories about Francis include his encounter with the beggar, for which his friends mocked him, and his encounter with the leper. Moreover, both Francis and Clare lived as beggars, subsisting on received alms. Not only did they give generously themselves, without expecting an opportunity to lord it over their beneficiaries, but they made themselves vulnerable to the generosity of others.

Unsurprisingly, these two couples live very different lives with very different motives. In my own self, I often desire to live like the Assisis, but I know too well the temptation to be like the Underwoods. As I begin watching season 2 this weekend, I wonder how much farther down the twisted path this show will go.

4 responses to “The Other Francis and Claire: House of Cards”

Read More about Racism and Theology