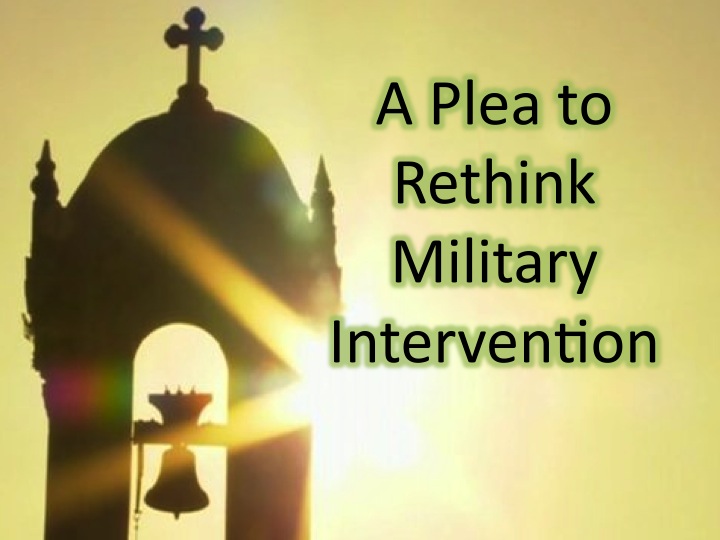 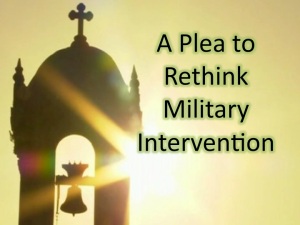 As the United States celebrates the legacy of the March on Washington and Rev. Martin Luther King—the great prophet of peace and nonviolence—our presidential leadership is contemplating military action in Syria following the horrific events of recent days.

The suffering from the deaths and displacement of thousands of Syrians cries out to the world for action. The use of chemical weapons, by whatever side in the conflict—a clear violation of international law after the United States and Europe perfected the use of chemical weapons nearly a century ago—clearly “ups the ante.” Chemical weapons no matter what the situation and not matter who used them represents, as John Kerry pointed out a “moral obscenity.”  But how ought we to respond?

At the moment, there seems to be more questions than answers. Speaking with actual Syrians, both Christian and Muslim (as I have in recent weeks), shows the complexity of the situation that hardly gets a sound bite in the US media. This complexity is reflected in the pleas of international Christian leaders, including Pope Francis, the Archbishop of Canterbury and Melkite Patriarch for peace in recent weeks. The fact that all these leaders have strongly warned against international intervention should give us some pause. A Catholic bishop of Aleppo has even warned that due to the complexity of the situation, a military intervention by the US could “spark a world war.”

For the United States and Great Britain, the response so far shows a lack of creative thinking. Both governments appear to be priming their publics for some sort of military action without any real legitimate intergovernmental mandate or clear plan for long term consequences in a similar way to Iraq.

Writing in The Guardian this week, Hans Blix, the former United Nations inspector for Iraq reminds us of the devastating unintended consequences from Anglo-American military actions. Blix strongly urges more diplomatic actions through what he sees as the only legitimate (though very imperfect) global authority:

In 2003 the US and the UK and an alliance of “friendly states” invaded Iraq without the authorisation of the security council. A strong body of world opinion felt that this constituted a violation and an undermining of the UN charter. A quick punitive action in Syria today without UN authorisation would be another precedent, suggesting that great military powers can intervene militarily when they feel politically impelled to do so. (They did not intervene when Iraq used chemical weapons on a large scale in the war with Iran in the 1980s.)

In the Catholic just war theory, legitimate authority plays a critical role. A war can have a just cause and be waged in a just way, but without a legitimate authority it remains unjust and immoral. For fifty years, Catholic social teaching has seen the UN as the legitimate authority to address international conflicts. This principle was affirmed by the Responsibility to Protect (R2P) framework that was adopted by the UN General Assembly and strongly endorsed by Pope Benedict on his visit to the UN. According to the R2P, if a national government is unable or unwilling to protect its citizens (as in the case of Syria) state sovereignty yields to legitimate international authority in the form of the United Nations or regional governmental bodies like the Arab League or African Union. It then becomes the responsibility of the broader community and not any one state of coalition of states to protect the people. Given its limited mandate and poor track record, I would point out that NATO is hardly a legitimate authority in this case.

Right authority also lies at the core of the very idea of the United Nations and the very purpose of the UN Security Council. Again, the UN system needs serious reforms to strengthen its ability to reform or as Pope Benedict taught it needs to be given “real teeth.” Any intervention that circumvents this structure only serves to weaken the ability of the international community to respond to humanitarian issues. Intervention without the clear authority of an international institution fails both the moral and legal test. It is not the role of the US and UK to police the world. This is a shared responsibility of us all. Unfortunately, the ideologies of colonization and manifest destiny are not easy to break.

Among the many articles on Syria, the post by my friend Dr. Tobias Winright at Political Theology speaks the most to what I am feeling now:

No one seems innocent in this current conflict–except for the children. I wish there was some way to take their side, on all sides. From a just war perspective, however, in this particular case at this time, I do not see how military intervention is morally justified if we take into consideration–as we must–other criteria, besides only just cause, of the just war tradition.

Let me be clear, this is not a post in support of the Syrian regime or the rebels. Nor is it a post call for inaction. Not acting with military force does not mean taking no action at all. We must act. Yes, it’s complicated and difficult. Russia, Iran, Israel, Saudi Arabia (among others) all have invested interests. But shouldn’t this lead us to want to find an urgent solution without bombs?

Let us reach out to the people of Syria to hear their perspectives. We must work with all parties involved to try to come to a creative diplomatic solution. We must examine our broader policies and the role played by our allies in the region in this conflict. It’s been done before and can be done again.

As we contemplate how to best address the suffering of women, men and children, let us not forget to pray for peace and ask God to inspire us with the same gift of wisdom that led Dr. King to transform the world with nonviolent action.

These are only some of my thoughts, we would love to hear other thoughtful and respectful reflections on how we might respond to this crisis. I specifically welcome those from Syria to share their experience.