The following article reflects only the view of the author, and not the opinions of all Daily Theology contributors.

When I was an undergraduate at Boston College,  the Campus Ministry office sold “Educated by Jesuit” T-shirts to help fundraise for retreats and service trips. On the front of the shirt is the emblem of the Society of Jesus, and on the back a list of famous people who were educated by Jesuits at either the university or high school level. The list contains a host of celebrities, authors, actors, actresses, politicians, and activists. The names include Voltaire, James Joyce, Monsignor Oscar Romero, Bill Clinton, Tim Russert, “Tip” O’Neil, Salma Hayek, Amy Poehler, Alfred Hitchcock, and Maria Shriver.  To this list we could add Pope Francis, Fr. Greg Boyle, and some of our country’s most current politicians, namely John Kerry, the former Secretary of State, and Tim Kaine, the former vice presidential candidate. Tim Kaine’s Jesuit background, for example, did not go unnoticed by the media during the most recent election. This points out that being Jesuit educated does in fact make a huge difference for how you see the world and your role in shaping it. Kaine unabashedly pronounced that his Catholic faith and Jesuit education helped to influence his political stances on the environment, gay marriage (pro), gay adoption (pro), abortion (pro-choice), and the death penalty (anti). Conservative members of the faith in turn attacked his Jesuit education as emblematic of his “radical roots” , questioning whether or not his Jesuit education was truly Catholic and in accordance with Church teaching.

To state that Jesuit education plays a part in forming our political views seems obvious. Jesuit education prides itself on its commitment to justice and the practice of solidarity with those on the margins. If you read the Mission statement from any of the 28 Jesuit colleges and universities in the United States, you will come across pledges to “form men and women of conscience and compassion” (Creighton), to “foster in [students] ethical and religious values and a sense of social responsibility” (Fairfield), and to “prepare students for

ethical leadership” (Loyola New Orleans).  The task of Jesuit education is thus to integrate the ethical, the moral, the intellectual, and the religious, as well as to produce men and women who exist not for themselves but for others in the creation of a more just and humane world.  The hope is that the men and women who come out of a Jesuit university — no matter what their chosen career path or vocation — will have instilled in them a sense of social responsibility, particularly one that is attuned to the plight of the oppressed.

What if on the back that T-shirt we added the name of one other famous current politician? Donald Trump, the President of the United States by electoral vote, was educated by Jesuits too. He attended Fordham University for two years (1964-1966), before transferring to the real estate studies program at the Wharton School of the University of Pennsylvania.

The reality that Donald Trump attended Fordham for two years is not something that is often talked about in the circles of Jesuit higher education. This fact is often comically dismissed, principally because Donald Trump did not graduate from Fordham. So too is it disregarded because (the argument goes) Jesuit universities can’t expect everyone who attends their institution to become leaders in the fight against injustice. We don’t want to deal with the fact that a man who attended Fordham is the same man who proposed an expansion of the prison at Guantánamo, reversed plans to save wetlands and protect waterways from coal waste. We also don’t want to acknowledge that a man who attended a Catholic university is the same man who (while maintaining the most lavish lifestyle in presidential history) has proposed budget cuts to after-school programs, rental-assistance programs, the Community Development Block Grant program, legal assistance for the poor, the National Endowment for the Arts, and the National Endowment for the Humanities. And most recently, the man who attended a Catholic university that seeks to create men and women for others dropped the largest non-nuclear bomb on Afghanistan. Nearly every single proposal and administrative act put forth by Donald Trump and his administration runs contrary to the core Catholic social teaching (and Trump’s espoused Christian faith) to promote the human dignity of every human being.

The point is not so much that Donald Trump was present on a Catholic, Jesuit university campus — but the courses he took and what he gained from them. Every Jesuit college or university in the United States offers an iteration of the same core curriculum. And although Trump won’t release his college

transcripts there is a slim chance he would have been able to finagle his way out of certain required courses. That means that during either his freshman or sophomore year, Donald Trump would have had to take a required course in either theology or philosophy. He likely took both.

This is that we have to deal with if we want to understand the role that the Jesuit university has in organizing on behalf of the common good today.  Our inability to address the fact that Donald Trump likely sat in a theology class at Fordham, mimics our inability to address both the ways that Jesuit universities are complicit in injustice and that what we teach in theology and philosophy classrooms often supports this complicity.

The question thus becomes, as Ignacio Ellacuria asked in his 1982 Commencement Speech at Santa Clara University, “How does a university transform the social reality of which it is so much a part?”  Too often, Jesuit universities blend in to the status quo rather than embody an alternative to it. Thus, the problem is not solely Donald Trump. Rather, the problem is that he is a product of the ways our Jesuit universities are not living up to their inherent Ignatian values. I wo 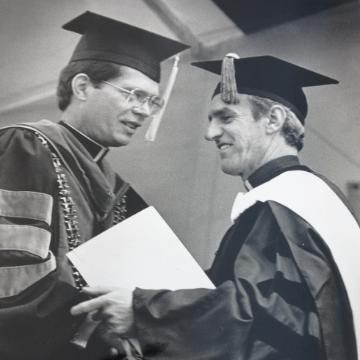 rry that Jesuit universities will fail to organize against Trump’s unjust policies, if they do not first address the ways that the university has justified hierarchical, patriarchal, heteronormative, and racist ways of thinking. So we must then ask — are our institutions leading the fight against global poverty? Offering just wages and health care benefits to their faculty members? Supporting the unionization of its workers? Are we creating syllabi inclusive of authors from a variety of backgrounds? Are we having honest conversations about racism, and how universities have often fostered an attitude of white supremacy and domination rather than seeking to decimate it?

Should Jesuit universities truly want to be a social force for good in an era of Trump, they must begin precisely where Christ began his ministry – on the margins. When Trump was named as President-elect, many theologians began naming this current historical moment as “our Bonhoeffer moment.” These words are of course polemical, insinuating that what was ahead in the Trump presidency is comparable to life in Nazi Germany. The problem I have with this statement is that Bonhoeffer is situated as the paramount theological voice. Although I affirm that Bonhoeffer e

mulated authentic discipleship in his prose and present action, he was still a straight, privileged, white male. And my opinion stands that this is not the theological voice who should be at the forefront of our movements to protest. In its efforts to organize, resist, and protest, Jesuit universities must not be guided by the voices of the elites, but by the voices on the margins of society. Texts that come from the traditions of oppressed persons and groups of persons are perhaps the only light that can and should lead the way in efforts to build the Kingdom of Heaven. We need womanist theology, black liberation theology, Latina/latino liberation theology, mujerista theology, queer theology, and Asian liberation theology. These are the texts that will unsettle. These are the texts that will disturb. Can we imagine a different world had Donald Trump been given the opportunity to read Dolores Williams, James Cone, Gustavo Guiterrez, Ivone Gebarra, or Marcella Althaus-Reid? Of course, he could have glanced over the words and not let their content sink in. But he would not have been able to fully escape it if the university was embodyig the vision that these authors present.

I will conclude with the profound words of Pedro Arrupe, S.J.:

First, let me ask this question. Have we Jesuits educated you for justice? You and I know that many of your Jesus teachers will answer to that questions.  They will answer, in all sincerity and humility:  No, we have not.  If the terms “justice” and “education for justice” carry all the depth of meaning which the Church gives them today, we have not educated you for justice. What is more, I think you will agree with this self-evaluation, and with the same sincerity and humility acknowledge that you have not been trained for the kind of action for justice and witness to justice which the Church now demands of us.  What does this mean?  It means that we have work ahead of us.  We must help each other to repair this lack in us, and above all make sure that in future the education imparted in Jesuit schools will be equal to the demands of justice in the world.  It will be difficult, but we can do it.  We can do it because, despite our historical limitations and failures, there is something which lies at the very center of the Ignatian spirit, and which enables us to renew ourselves ceaselessly and thus to adapt ourselves to new situations as they arise. What is this something?  It is the spirit of constantly seeking the will of God.  It is that sensitiveness to the Spirit which enables us to recognize where, in what direction, Christ is calling us at different periods of history, and to respond to that call. 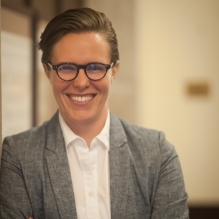 Meg Stapleton Smith is a Ph.D. Student in Theological and Social Ethics at Fordham University. She received her M.A. degree in Ethics from Yale Divinity School in 2016 and received her B.A. degree in Theology from Boston College in 2013. Prior to her time at Yale,  she was Director of Campus Ministry and a Theology teacher at Notre Dame Cristo Rey High School in Lawrence, MA. Her current research interests lie primarily in analyzing Christian virtue ethics from a liberationist perspective.