I. An Apostolic Failure

Following the 2016 United States Presidential Election, a renewed energy around social organizing has surfaced. Groups have formed in many communities and demonstrations have been organized on a range of topics including women’s rights, science, immigration, and climate change. These have been powerful cathartic spaces for people to voice their concerns and find comfort in affinity groups. How effective they will be in the long run, however, is yet to be seen. Without more organized efforts, and dare I say it more prayerful and penitential spaces, I’m doubtful that these activities will be capable of doing, what Fr. Greg Boyle, SJ, has described as, the “slow work” of social transformation.[1] These recent activities follow more effective and focused organizing actions, including the Black Lives Matter movement, the Dreamer movement, the People’s Climate March and the Standing Rock protests.

But where is the US Catholic Church in all of these efforts? One might think with a pope strongly calling for renewed efforts of social organizing, there would be an increased Catholic engagement in these broader movements. Consider his clear call in this call in 2015 message to popular movements, a point he reaffirmed last week in his TED Talk:

I would like to repeat: the future of humanity does not lie solely in the hands of great leaders, the great powers and the elites. It is fundamentally in the hands of peoples and in their ability to organize. It is in their hands, which can guide with humility and conviction this process of change.[2]

To the determent of both the church and these wider movements, US Catholics have been slow to respond to Pope Francis’s call to organize. With some notable exceptions (including some great friends writing for this series) the US Church’s response to the crisis of economic inequality, migration, climate change, and war has been anemic and largely ineffective.[3]

Quite frankly, the inability of the church to mobilize and organize the faithful inside and outside the church represents an apostolic failure. Too few of the baptized see themselves as active participants in the church and its mission in the world.[4]

Like many of our friends, my wife and I struggle to find a parish where the challenges of the Gospel as highlighted by Pope Francis are lived. Too often homilies, prayers and liturgies fail to mention the suffering of people near of far. It is as if the Gospel and Eucharist have no meaning to reality. And if there is a “social concerns” group in the parish, it is usually focused on charity rather than justice. Frequently, I find myself thinking of these words from Pope Francis:

“Pastoral workers can thus fall into a relativism which…proves even more dangerous than doctrinal relativism. It…consists in acting as if God did not exist, making decisions as if the poor did not exist, setting goals as if others did not exist, working as if people who have not received the Gospel did not exist….Let us not allow ourselves to be robbed of missionary enthusiasm! (EG 80)

This is, at its core a crisis of the apostolate – of organizing the faithful in mission. The challenge of getting the average Catholic to see themselves as full, conscious and active participants in the life of the church is made more difficult by the forces of clericalism (including on the part of lay leaders), indifference, consumerism, racism, ageism, and partisan polarization.

II. Toward a New Theology of Organizing 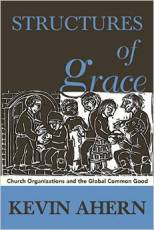 In the task of mobilizing Catholics for action both inside and outside the church, a new theology and spirituality of organizing is needed now more than ever. In Structures of Grace: Catholic Organizations Serving the Global Common Good, I point to a few resources within pneumatology for such a task.

Catholics, it seems clear to me, have a vocation as organizers. Through baptism, confirmation, and the Eucharist we are initiated and renewed in Christ Jesus through the Holy Spirit. In the Body of Christ there can be no passive members. The Christian, who does not organize, as one of my favorite lines of Vatican II points out, “is neither useful to the Church nor to themselves”. Apostolicam Actuositatem, 2

By turning to Scripture and the Christian tradition, we can identify a few dimensions of our apostolic vocation as organizers. First, God grants Christians specific gifts or graces for the building up of the community (1 Cor. 12:7). Second, grace not only serves to heal us from sin, but also elevates and empowers us to go forth and transform others (think of the power of Pentecost). God’s gracious free gifts, thus, have inherently communal dimensions.

Finally, through charisms and gifts, God invites us to form social movements and organizations. Beyond the many structures of the institutional church, consider, for example, the Franciscan, Dominican or Ignatian charisms and the thousands of social justice movements (“structures of grace”) around the world that are inspired and sustained by them today.

III. Toward a New Way of Organizing

So what can we practically do to embody this theology of organizing in the life of the church? How can we find ways of mobilizing lay Catholics to be apostles in the world. Here, I’d like to strongly propose a revival in the model of Specialized Catholic Action.

This model essentially consists of small communities of lay people who gather together weekly or monthly to do some version of the “Review of Life” – the See, Judge, Act. This method offers a chance for people to bridge spiritualty, social justice, and daily life. It also helps to empower real lay people (those who are not consecrated and not church staff) to be active agents in the life of the church outside of the Sunday liturgies.

For the sames reasons why it’s important for people to join together in local groups, it’s necessary for local groups to network globally into in one of ten movements (such as IYCW for young workers, IMCS for college students, ICMCIA for Catholic professionals and MIJARC for young farmers.) These global communities both serve as voices within the structures of the church and United Nations system. Over the past sixty years, these movements have had a tremendous impact in shaping teachings of Vatican II, in bringing about early insights of Liberation theology, and in transforming social and political realities around the world.

It would not take much to renew this model and the time is ripe to build on the momentum offered by Pope Francis. If you are interested in this effort let me know we are looking to re-lunch a few communities in the United States this summer.

In the end though, it’s not so important what organization you join, but the fact that you are actively engaged in the life of the church throughout the week. Not as a consumer or a passive observer, but an active and engaged adult Christian, as an organizer in the apostolate to which all of Christians are called.

[1] Real transformation necessitates deeper analysis on the structural and cultural root causes of these problems and must include a reflection on how many of us are complicit in them. For example, I’ve seen several groups lament inequalities, but fail to consider how they themselves benefit from that system.

[4] Rather than being a participatory church that “goes forth” to preach the good news of God’s kingdom, organized Catholicism is increasingly becoming irrelevant for people in their daily struggles, as recent Pew polls have found. For example, fewer and fewer Catholic see the Church as playing a role in addressing social problems http://www.pewresearch.org/fact-tank/2016/07/18/are-churches-key-to-solving-social-problems-fewer-americans-now-think-so/ and that large numbers of Catholics do not see social justice issues as essential dimensions to their faith. http://www.pewresearch.org/fact-tank/2015/09/02/key-findings-about-american-catholics/