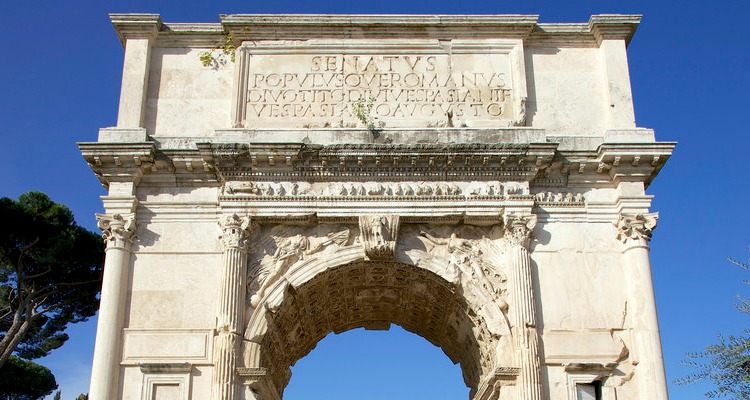 In January I traveled to Italy with 29 undergraduates and another faculty member for a course examining the church’s “communication for communion” in the Renaissance and modern/postmodern periods.

Standing near Rome’s Colosseum is the Arch of Titus, built to commemorate the Roman Empire’s triumph in the Great Jewish Revolt and destruction of the Second Temple of Jerusalem in 70 CE.  The arch depicts Jewish people marched to Rome as slaves with the Temple’s menorah as a spoil of war.  From the arch, one can look down into the Forum, center of Roman political and economic life.

With the fall of the empire, the Forum deteriorated to ruins, however, the Arch of Titus remained and was repurposed.  In the mid-16th century, Pope Paul IV selected it as the site for a yearly oath of obedience from the Jewish leaders, a ritual that included kissing the pope’s feet.  Standing beneath a Roman memorial to a destruction at once spiritual and political, the pope reinforced both Christian claims to spiritual superiority over Jews and the political power of the Papal States over Jews.

This combination of spiritual and political power was institutionalized by Paul IV’s creation of the Jewish Ghetto, which confined Jews to a small, frequently-flooded section of Rome, controlled their professions, legislated their interactions with Christians, required the wearing of symbolic clothing to signal their religious identity, and permitted only one synagogue.  Four churches stood sentry on the ghetto’s border; Jews were forced to attend masses to prompt conversion to Christianity.   An inscription over the door to one church quotes in both Hebrew and Latin the prophet Isaiah on the rebelliousness of the people of Israel, underscoring Christian views of Jewish unfaithfulness to God, and using the words of their scripture against Jews.  The ghetto remained until well into the 19th century; it was razed not by papal decree, but rather through the unification of Italy and the end of the Papal States.

The Great Synagogue of Rome stands on the remains of the ghetto.  Built in 1901, the first rounding up of Roman Jews occurred just beyond its walls.  Embedded in the streets today are brass cobblestones with the names those who were taken, records of life and death in a place surrounded by churches whose members all too often remained silent in the face of their neighbor’s distress.

Our own Catholic history shows the suffering inflicted when marginalization becomes ritual, when fear becomes political policy, when self-interest becomes a zero-sum game.  The Arch of Titus memorializes not only the Roman Empire, but also the actions of the church which both arose from and reinforced hatred for Jews among Catholics.  The brass cobblestones, in German, stolpersteine, literally, stumbling blocks, should trip up our assumptions that the deep roots of religious suspicion, mistrust, and hard-heartedness have been dug out of our Christian witness.

Our own time offers no shortage of opportunities to learn from the past.  Twice in January, multiple bomb threats were called in to Jewish centers in the United States.  Yesterday, Holocaust Remembrance Day, Mr. Trump signed an executive order indefinitely suspending the entry of refugees from Syria and prohibiting entry to the United States for 90 days to immigrants and non-immigrants from seven predominantly Muslim countries.

Catholics have a history to remember and choices to make.

How will future memorials reflect our actions today?