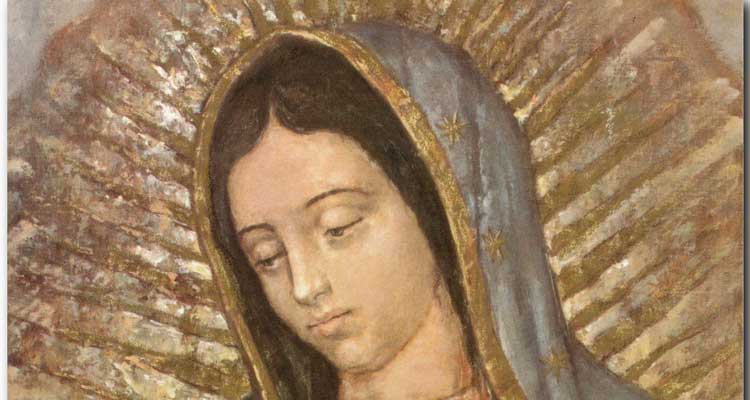 It is that time of the year again when one of the most visible signs of the faith of Mexicans, Latin Americans, and U.S.-Latinx communities becomes visible through the wondrous excess of roses, dance, songs, and piercing prayers. It is a time when hearts are poured out in silence to that living image that is Our Lady of Guadalupe.

As a Salvadoran, and now a Salvadoran-American, year after year I feel like a welcome guest at the banquet of devotion that is the feast of Guadalupe, whose historical manifestación[1] is timelessly bound with the region of what is now Mexico and its indigenous people and church. Scholars say that the socio-historical context of Guadalupe is essential for understanding her manifestación in history, a context that is one of “near-annihilation.”[2] It is into this context of violence and ultimately of death that Guadalupe inserts herself by piercing history with her presence.[3]

Because the story of Guadalupe is at once particular and universal, let us contemplate her presence through another story—one that is also particular and yet representative of what continues to happen to the poor and powerless that live captive in the underside of history. Instead of retelling what happened between December 9-12, 1531, let me tell you what happened[4] four-hundred and fifty years later, not in the hill of Tepeyac, but in the mountain town of El Mozote in El Salvador. Here is a testimony—a witness—not only of near-annihilation, but also of the presence of Guadalupe.

Between the 10th and 12th of December 1981, the elite military battalion, Atlacatl, trained by the United States’ School of the Americas, descended upon the village of El Mozote and its surrounding area and slaughtered over 800 persons in the course of three days. One of the witnesses, Rufina Amaya, lived to tell the story and to fight that the Salvadoran government take responsibility for the events. In 2008 the Tutela Legal (legal aid office) of the Catholic Archdiocese of El Salvador published a 450 page study that contains not only Rufina Amaya’s testimony of the killings at El Mozote, but also testimonies by individuals who managed to flee the killings in the neighboring villages located just a few kilometers away. Their accounts provide us with a glimpse of the dehumanizing violence that forced Salvadorans to flee for their lives at the beginning of the civil war and throughout the decade. In homage to Rufina Amaya’s tireless work of communicating the horrors of the massacre, even when the Salvadoran and United States governments denied the accounts, we will briefly summarize her testimony:[5]

According to Rufina Amaya, on the10th of December around 6 pm, soldiers entered the town and told everyone to gather on the dirt road, face down in front of the Catholic Church in the town square. Amaya relates that people had not left El Mozote because two days prior, the military had told the owner of the town store, Mr. Marcos Diaz, to tell the townspeople that that the military would be carrying out an operation in the area, but that all those who gathered in the plaza would not be harmed. Peasants from the neighboring villages had also been encouraged to gather in El Mozote for safety, thus the population of the town swelled that day. After gathering them in the town square, the military ordered all of the people to go into the various houses in the village, and Rufina Amaya and her family spent the night in their own house.

At dawn, the soldiers began to drag people out to the village center and lined them up into two rows, one for men and one for women and children. The men were sent into the church building, and the women and children into a couple of homes. Around noon on December 11th, a soldier came into the houses for the young women and they were taken away in groups. Later they came for groups of older women. Around 5 pm they came for her and forcefully separated her from her four young children, three of them under 10 years old and a baby that was still in her arms. Because of her attempts to stay together with her children, she ended up as the last one of the adult women to leave the house in a single line.

As the adult women were being taken down the dirt road of the village, she could see that homes were being set on fire, with dead bodies inside the houses. Some women were being taken away in groups, while others were being shot in homes. In the midst of this chaos, while still at the end of the line, she got on her knees and prayed. In her testimony she says, “I asked our Lord and the virgin of Guadalupe to wrap me in her mantle and to cover me, and if I was allowed to get out of there, then to help me, and so I began to pray the Our Father on my knees. Then, while still on my knees finishing the Our Father, I hid under a branch and stayed there.”[6] On that eve of the feast of Guadalupe, Amaya used the branch of a small crabapple tree and a pinneaple plant located next to a barbed wire fence to hide herself. From her hideout she could see the killings of group after group of women. Around 11 pm, once the men and the women had been killed, the killing of the children and their screams began. Little by little Amaya crawled on her belly so as not be seen and started to get further away from the site of the slaughter. When soldiers saw something at a distance crawling away, they shot at her, but she hid under bushes and leaves until the soldiers left the scene. By this time it was already early morning on December 12th.

In the events narrated above we become bystander witnesses to a slaughter that is much recent in our history than that of the 1500s conquest of the Americas, for it is only 35 years away in the past. For many Salvadorans though, this “past” is ever present, for it continues to live in the collective memory of a people. Similarly, one can say that the past of 1531 is also ever present in all those who in one way or another continue to read themselves into the living story of Guadalupe, Juan Diego, and the bishop—a story of colonial occupation, of the Divine’s preferential option for the oppressed and persecuted, and of the church’s ongoing challenge to embody in its very structures the unflinching love and protection that Guadalupe offered Juan Diego.

In a recent reflection on Guadalupe, theologian Timothy Matovina writes: Like God in the book of Exodus, Guadalupe appears in a dark moment of history. She goes to the periphery and, through Juan Diego, unleashes the power of mercy within an oppressive colonial reality. She asks that a temple be built on the hill of Tepeyac where she “will show and give to all people all my love, my compassion, my help, and my protection.” Not just the natives. Not just the conquering Spaniards. Not just the enslaved Africans, nor the mixed raced children. All people. Guadalupe’s offer of mercy addresses the entire social order. It is not merely a source of comfort, it is a call to action.”[7] Like the manifestación experienced by St. Francis of Assisi in 1205 when he heard the call to go and repair/rebuild God’s church, Juan Diego also became the means through which the divine called and continues to call the church to be a site of love, compassion, help, and protection for all. Through Juan Diego Guadalupe asks that a santuario be built, a sanctuary that will be a holy place because it will be a place of refuge for all who are persecuted. This is still the call and challenge for the church universal and for local churches—to be a sanctuary where the lives of all are protected and where violence gives way to healing.

In El Mozote, the church building became the site where on December 11, 1981 hundreds of children were shot to death by government officials, thus desecrating not only the church building but most importantly, the sacredness of life itself. Wherever persons are threatened and churches refrain from mediating the love, compassion, help, and protection of the divine to those facing persecution, there the church is also desecrated.

In the past few weeks the word “sanctuary” has re-entered political discourse as president-elect Trump threatens to persecute and deport millions of those very people who may have fled circumstances of “near-annihilation” because of poverty, violence, and war. In the midst of this fear-driven reality, let us recall that our Lady of Guadalupe is a sanctuary who then and now seeks out the persecuted and wraps them in her mantle to cover them and protect them from the powerful who unleash violence upon history. Guadalupe asked Juan Diego in the 1500s, and continues to ask us now that a temple be built that will truly mediate the presence of the One she bears—the One who also bears life for all. It is of this One who is to come that Isaiah prophesied:[8]

For every boot of the booted warrior in the battle tumult,
And cloak rolled in blood, will be for burning, fuel for the fire.

For a child will be born to us, a son will be given to us;
And the government will rest on His shoulders;
And His name will be called Wonderful Counselor, Mighty God,
Eternal Father, Prince of Peace.

[3] For a theological-historical reading of this near annihilation of the peoples of the region at the hands of European empires and of the Catholic Church, I recommend that the reader immerse herself in Gustavo Gutierrez’ Las Casas: In Search of the Poor of Jesus Christ.

[4] For any reader that is interested in better understanding the complex category of “what happened” given that no two narratives of events of history can be exactly identical, I recommend the following book: Douglass, Ana, and Thomas A. Vogler. Witness and Memory: The Discourse of Trauma. https://www.amazon.com/Witness-Memory-Discourse-Ana-Douglass/dp/0415944554