The powerful words of Pope Francis at the 2016 Consistory ought to give all Americas pause. Coming less than two weeks after the contentious presidential election, the Pope’s homily, based on the reading from St. Luke’s account of Jesus’ Sermon on the Plain, offers both a sharp condemnation to the increasing state of polarization in US Politics and the temptation to demonize, scapegoat, marginalize, and attack “the other.”

The pope begins with a reminder of the powerful message of Jesus Christ to love. This is not a love of greeting cards or fairy-tale rainbows; it is a deep and bold commitment to embody the very essence of the God, who is love, and who calls us to mercifully love everyone, including our enemies. As the Pope points out, this is not easy:

“Our first instinctive reaction in such cases is to dismiss, discredit or curse them.  Often we try to “demonize” them, so as to have a “sacred” justification for dismissing them.  Jesus tells us to do exactly the opposite with our enemies, those who hate us, those who curse us or slander us.  We are to love them, to do good to them, to bless them and to pray for them.”

He then continues to draw particular attention to the problem of political, social and economic polarization, which is growing throughout the world, and was particularly evident in the recent US election. What is important, here, is that Francis highlights the link between polarization and the exclusion or demonization of minority groups, particularly refugees migrants and those of other faiths:

It does not take much to see the relevancy of his words for the US political and ecclesial context. Already, Daily Theology’s Meg Stapleton Smith has offered a powerful reflection on this challenge .

For many in the United States, there was a hope that the polarization and scapegoating of the campaign trail would give way to deal making and a more conciliatory and toned down path for the new president-elect. The recent proposed cabinet-level appointees for the new administration, however, reveal a different reality. Many of those positioned to be the most powerful advisors to the next president, have distributing histories of racism and xenophobia and there are few signs that the anti-immigrant and anti-Muslim rhetoric will dissipate.

So what are we to do? What can Christians, who seek to follow the words of Jesus Christ and the Gospel do in such a context. The following are a few tips that might be helpful as we seek to address both the tendencies to polarize and demonize.For Christians, prayer should be seen as something key to each step.

Perhaps more than any other social institution, the Roman Catholic Church has the greatest potential to transform the future direction of this nation. Organizing around the sanctuary movement, as Leo Guardado described this week, is an important and urgent step. At the same time,  we must not also work to tra 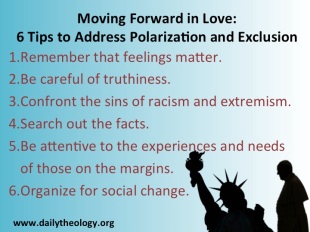 nsform our social structures and relationships. Small acts are not enough. The efforts of the #blacklivesmatter and the DREAMer movements, even if imperfect, are powerful examples of how love and concern for others can mobilize efforts for both personal and social change.

With love and God’s grace, we can witness to mercy and love in our lives, while also organizing ourselves and our communities to overcome the tendencies of polarization and exclusion that threaten the common good today.