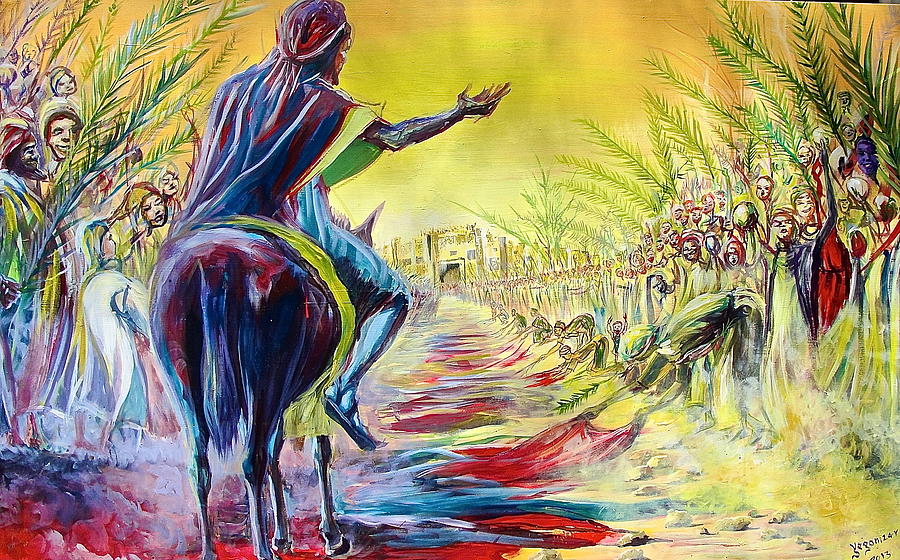 The Palm Sunday liturgy produces a tension in us. The stories that we tell are really a process, a journey that we call Passion. We have Jesus’ triumphant entry into Jerusalem on the one hand and his crucifixion and death on the other. Palms and cheers of ‘Hosanna’ give way to jeers and spitting and the swell of violence. Celebration is held in tension with suffering.

For several years, I witnessed my parents and my aunt and uncle care for my aging and infirm grandmother. Since I live far from them, much of my accompaniment came through listening in our phone calls. For years, they recounted stories of her cantankerous, fist-shaking complaints about her neighbors and friends at the facilities that provided her care. There were many more moments of sweetness. She would tenderly say thank you for their care in unexpected quiet moments. Once my Grandmom looked at my mom with childlike wonder when Grandmom said thank you for the mints that she loved. These were ordinary moments of celebration, warmth that punctuated the loss of memory and identity that were the hard realities of her dementia. I listened to my mother’s and father’s hopes enveloped in moments of Grandmom’s lucidity. But they knew that her handle on life had already slipped. They asked questions about the community of loved ones she saw surrounding her, both living and dead, as the synapses in her brain echoed their last. For almost a decade, my family journeyed in a kind of every day Passion with my grandmother in which celebration and suffering marked moments of her journey back to Christ.

I find it hard to hold together the immensity of Jesus’ story as I reflect on the readings for Holy Week. I also wonder what it meant for my family to be transformed into caregivers for the matriarch who cared for all of us. As Steve Okey observed two years ago, it’s hard to understand the reasons why we project the story out toward death in a moment of celebration. I think the Palm Sunday liturgy points exquisitely to an important truth of our Christian life together. We need to hold the ends of this tension if we are to understand God’s radical acts to affirm life in the Incarnation (God made human) and Resurrection (God overcoming death).

There’s an old liturgical formula in the tradition around the Sacraments and liturgical life of the Church – lex orandi, lex credendi–“the law of prayer is the law of faith: The Church believes as she prays.”[i] Belief cannot be separated from the act of prayer, sacrifice, and celebration together. Yet that belief emerges from the lived experience of the community that gathers in God’s name (lex vivendi). When we accompany Jesus through today’s liturgy, we live into the journey between celebration and suffering, exalting at the wonder of life and being distressed by its profound brokenness.

The palm processional (Luke 19:28-40) captures the way that a single life can be celebrated. Imagine if all human life were celebrated this way.

“As he rode along,
the people were spreading their cloaks on the road;
and now as he was approaching the slope of the Mount of Olives,
the whole multitude of his disciples
began to praise God aloud with joy
for all the mighty deeds they had seen.
They proclaimed:
“Blessed is the king who comes
in the name of the Lord.
Peace in heaven
and glory in the highest.”

Where in our lives do we throw our cloaks on the ground and go out of our way to honor and celebrate the person before us as the living embodiment of God?

So many images come to mind. My mother and my aunt bathing my grandmother, my cousins lifting her from her bed gently, my nieces and nephews keeping watch at her bed as she moved toward the end. I could see the cloaks and palms upon the ground they walked with her toward the tomb. In my own city, women just a few weeks ago chained themselves to ladders and disrupted rush hour to remind us all that human beings are not illegal . In the Global South disabled activists in Bolivia suspended themselves from a bridge for disability rights. 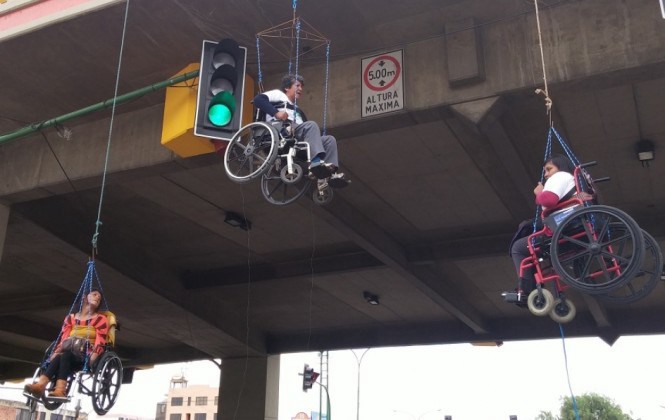 Bolivian activists protest their treatment by the government in a striking act of public dissent.

From the ordinary and personal to the extraordinary and social, these moments are the liturgy (leitourgia), “the work of God” that demonstrates to the world that Jesus is present in the struggle for human dignity.[ii]

“Christ Jesus, though he was in the form of God,
did not regard equality with God
something to be grasped.
Rather, he emptied himself,
taking the form of a slave,
coming in human likeness;
and found human in appearance,
he humbled himself,
becoming obedient to the point of death,
even death on a cross.”

We are always in the midst of this cycle of Passion. In the heart of the journey we have a hard time recognizing the places where life is celebrated and bodies are honored even though buffets and jeers so often win the day. Today, before we accompany Jesus in the struggles of this week, we are invited to step back and take the long view. Even as we celebrate the Incarnation and honor the body of Jesus,  we know that death must be overcome in Resurrection.

Shortly after my Grandmom died three years ago, my dad said he feared that his memories of her would always be marked by the end of her life with us. He worried that the long odyssey of care would leave him with more vivid recollections of her decline than the character that she had been all her life. Instead, those moments of her decade-long passion were transformed into metaphors for the way she lived her life before she was sick. Now he thinks of her grit, her love, her intense loyalty for her family. All those things were the markers of the family’s care for her too.  It helped to give me a lens for this day.

We have to look back through Passion and see triumphant entry as the manifestation of a life lived in complete unity with God. Today, we read Jesus’ story in the way that we read my grandmother’s story. We read the journey as a liturgy of the struggle to affirm life in the face of death, to celebrate in the midst of suffering, to affirm the value of one life and, in so doing, affirm the value of all living.

John DeCostanza, Jr. is the Director of University Ministry at Dominican University in River Forest, IL and an ecumenical D.Min. candidate and Joseph Cardinal Bernardin Scholar at Catholic Theological Union.