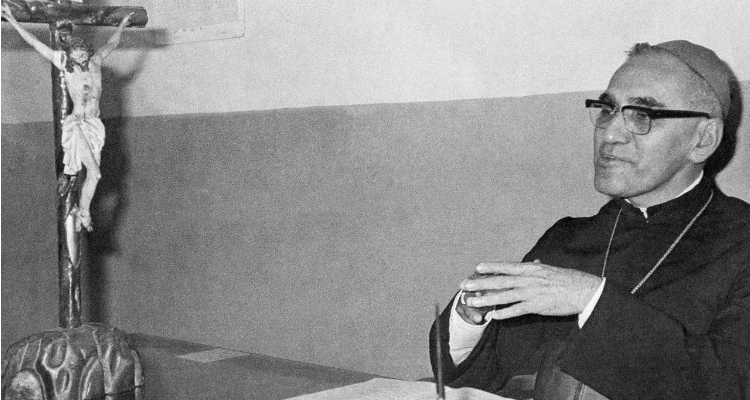 Editor’s Note: This post comes from our blog partner, Super Marytrio, and is written by the editor, Carlos Colorado.  Please visit his blog for the complete article!

Pope Francis has called Blessed Archbishop Romero a “good shepherd, full of the love of God and close to his brothers who, living the dynamism of the Beatitudes, went as far as to give his life violently, while celebrating the Eucharist, the supreme sacrifice of love, sealing with his own blood the Gospel he was announcing.”  He spoke the words on Friday Nov. 30after receiving some 500 Salvadorans to thank him for beatifying their martyr bishop and invite him to canonize him in El Salvador during his trip to Mexico next year.

After he finished reading his prepared text, Francis said: “I would like to add something that perhaps we gloss over in the martyrdom of Archbishop Romero, which was not limited to the time of his death; it was a martyrdom that continued after his death.” Romero’s martyrdom “continued even by his brothers in the priesthood,” the pope said, referring to criticism of Romero inside the church. “How often people who have given their lives or who have died are still stoned with the hardest stone in the world: the tongue,” said the Pontiff.

“We are grateful to the Holy Father, we come to thank him as the Salvadoran community,” said Msgr. Gregorio Rosa Chavez, auxiliary bishop of San Salvador—one of the members of the delegation—to Vatican Radio. “In Romero, the world has an icon of what the Church dreams for pastors, a pastor of the flock who goes ahead, as the Pope says, between and behind the flock, a pastor who has the smell of the sheep and gives his life for his flock.” They gave the pope a Romero relic: a scapular and a piece of the corporal stained with Romero’s blood.  Francis said Romero’s blood is mixed with “the blood of a great number of Christian martyrs whom even today is still dramatically shed in the field of the world with the certain hope that it will bear fruit in a rich harvest of holiness, justice, reconciliation and love of God.”

The Salvadoran delegation included seven bishops led by the current Archbishop of San Salvador, Msgr. José Luis Escobar Alas and, representing the government, the Foreign Minister, Hugo Martinez, and the Minister of Governance and Communications Hato Hasbún. They were also accompanied by hundreds of Salvadorans living in Italy, mostly in the northern city of Milan. The members of the delegation began lining up to enter the Vatican premises through the Bronze Gate in St. Peter’s Square at 9:00 am for the audience which began at noon in the Clementine Hall of the Apostolic Palace.

In his meeting with the pope, the Salvadorans bishops updated him on the status of the beatification cause of the Salvadoran Jesuit martyr Rutilio Grande. According to Msgr. Jesus Delgado Acevedo, who is close to the Romero canonization cause, “The Pope has conditioned, in a way, the canonization of Archbishop Romero” to the conclusion of the work on the cause of Grande so that he can personally beatify Grande and canonize Romero during a single trip to El Salvador. “He has told the bishops that the day they are prepared with the beatification of Father Rutilio Grande, on that occasion he would canonize Romero, provided there was a proven miracle by Archbishop Romero,” Delgado told a Salvadoran outlet before departing for Italy. The Salvadoran Church insists that three possible miracles by Romero have been already sent to Rome, but Delgado said he was unaware if they have been presented to the pope.

The Salvadorans proposed to the Pope to go to El Salvador to preside over the double ceremony for Romero and Grande during his upcoming trip to Mexico, confirmed by the Vatican for 2016. “I think, I assume, I am no prophet,” Delgado said, “that the Pope’s visit would be next year, during his visit to Mexico, perhaps extending his visit to include Guatemala and El Salvador, it could be then that the Pope visits El Salvador to canonize Archbishop Romero.”

Read the rest of the post, including the Pope’s full address to the delegates, here!