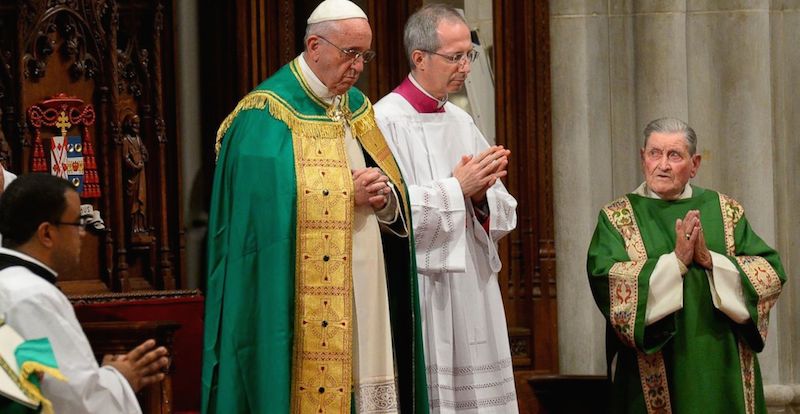 Upon arriving in New York, Pope Francis immediately traveled to the center of the city’s ecclesial and civic life for a service of “Vespers with the Clergy, Men and Women Religious” at St. Patrick’s Cathedral in midtown Manhattan. What a great idea!

And what a great joy that the pope would take the time to address women religious, many of whom have felt so marginalized by the church under two recent investigations. By far, the height of his homily during the vespers is when he spoke directly to women religious:

“In a special way I would like to express my esteem and gratitude to the religious women of the United States. What would the Church be without you? Women of strength, fighters, with that spirit of courage which puts you in the front lines in the proclamation of the Gospel. To you, religious women, sisters and mothers of this people, I wish to say “thank you”, a big thank you… and to tell you that I love you very much”

He also had some brotherly advice to his fellow priests, urging them to become closer to the poor and find time for what James Keenan, SJ has described as self-care. “Rest is needed,” the pope stressed, “as are moments of leisure and self-enrichment.” What a great message for our priests who are often overworked and unappreciated.

In a perfect world, I would hope that a special prayer service would have also been organized for lay people who also give their time, talent and treasure as catechists, volunteers, social workers, parish council members, liturgical ministers and theologians. I might also expect that in a prayer service for religious, that leaders of religious communities might formally welcome the pope to NY along with the cardinal. But it’s not a perfect world and insofar as it is a human institution, it’s not a perfect church.

But even in an imperfect church the average person might assume that a “Vespers with the Clergy, Men and Women Religious” (the official title of the event) might feature, include and promote women and men religious and secular clergy. Sadly, that was only half the story at St. Patrick’s tonight.

Instead of being filled with religious and priests who have given their lives to the building up the people of God, many of the participants, particularly in the front rows were VIPs and wealthy donors to Cardinal Dolan’s 175 Million Dollar renovation of St. Patrick’s. The VIPs included Ken Langone, a “mega-donor” who has a terrible track record on worker rights and who has compared efforts for addressing income inequality to the Nazis. Yes, this is the same Langone who threatened to withdraw money from the cathedral restoration project after the pope’s criticism of capitalism.

But it was not just about seating. Beyond the pope, the skilled cantor, and Cardinal Dolan, the only people to participate in the liturgy were not religious. The reading and the petitions were read by the wealthy.

Apparently, however, the VIP donors were upset that their seats were not good enough for the money. Earlier this week on Fox News, Fox Business correspondent Charles Gasparino pleaded the case for the donors who were only given “good seats.” (Today, Gasparino went on to muse about Jesus being a capitalist.). Likely echoing the sentiments of many, Gasparino seems confused at why nuns might get better seats than the big donors as he says :

“As you know, a lot of Wall Street guys gave a lot of money to this. They raised a lot of money over the last couple of years to renovate this thing. They thought they would have better seating.”

Well they did have better seating and they were invited to an event for religious that most religious in the NYC area did not get the chance to attend. The presence of Henry Kissinger, who many perceive as a war criminal and supporter of regimes that actively persecuted religious women and men committed to justice was particularly disturbing. Money and power, in New York, buys privilege and I guess it’s the same in our Cathedral. What would Dorothy Day, someone quoted by the pope earlier in the day in his congressional address, say to that?

What upsets me so much about this tale of two churches is that there are literally thousands of women and men religious who have given all of their lives (not just a tiny portion of their net worth) to building up the church within a short bus ride of New York City. Some retired women religious face near poverty living conditions as their communities struggle to fund the costs of medical care. In other, words, there were plenty of people who could have filled St. Patrick’s.

Thankfully, there was one special woman religious who got to meet the pope at the Vespers.

After a social media campaign, Sr. Noel Divine, an 88-year old Maryknoll Sister, who is unable to speak because of a degenerative condition, was given a ticket and the Pope warmly greeted her on his way out. Like Pope Francis and Dorothy Day,  Noel reminds us that the Gospel is lived in service with our eyes fixed on God’s Reign. We should be thankful to those who give money to our buildings, but let’s not forget about those who give their lives to the true church, the people of God!