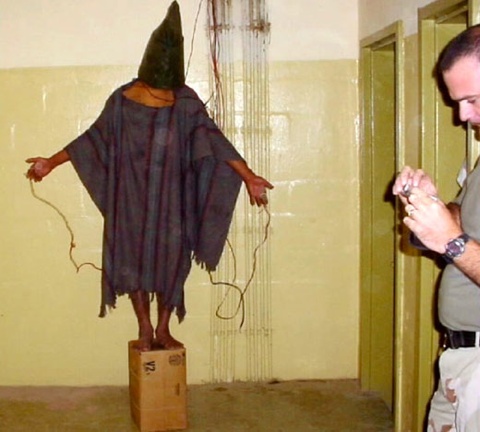 This year, on the First Wednesday of Advent (Dec 3), the Senate Select Committee on Intelligence published a report on the CIA’s interrogation tactics between late 2001 and early 2009, when President Obama took office and banned “enhanced interrogation methods.”  The full report (at least the declassified version) is available here.  There are plenty of summaries online, including this one by the NY Times, highlighting some of the more disturbing parts.

One of the more impactful op-eds to come out of this was one by a former-interrogator-turned-professor. Eric Fair, once an interrogator and–in his words–torturer, at Abu Ghraib, writes:

“Abu Ghraib dominates every minute of every day for me. In early 2004, workers inside Abu Ghraib were scrambling to cover the murals of Saddam Hussein with a coat of yellowish paint. I accidentally leaned up against one of those walls. I still wear the black fleece jacket with the faded stain. I still smell the paint. I still hear the sounds. I still see the men we called detainees….

“When I asked the students to share their memories of the release in 2004 of the Abu Ghraib photographs showing the abuse of detainees, I received the sort of looks students give when they think they should know something and are too embarrassed to admit they don’t. Most avoided eye contact, some gave a sort of noncommittal nod, while others went for pure honesty and just yawned.

“It was my first encounter with a generation that doesn’t consider the release of the Abu Ghraib photographs to be a critical moment in their lives. I don’t fault them. They were in elementary school at the time. It’s something for history books. It’s something their parents talk about. It’s an answer on a test.

“As I looked at their blank faces, I realized I could let myself feel a powerful sense of relief. Abu Ghraib will fade. My transgressions will be forgotten. But only if I allow it.”

Fair continues to write how it is precisely by not allowing people to forget that he is able to face a past for which he will never be prosecuted.

“Today, the Senate released its torture report. Many people were surprised by what it contained: accounts of waterboardings far more frequent than what had previously been reported, weeklong sleep deprivation, a horrific and humiliating procedure called “rectal rehydration.” I’m not surprised. I assure you there is more; much remains redacted.”

As a former military officer with security clearance, I am sure he’s right–the CIA has long been an instrument of the worst intentions of the United States of America.  Thank God that Eric Fair’s life has become a noble one, but if the Geneva Conventions were being upheld, he would be found guilty of war crimes, as would many, many others:

“No physical or mental torture, nor any other form of coercion, may be inflicted on prisoners of war to secure from them information of any kind whatever. Prisoners of war who refuse to answer may not be threatened, insulted, or exposed to any unpleasant or disadvantageous treatment of any kind.” Article 17, “On the Questioning of Prisoners,” Geneva Conventions, 1949.  [As a side note, so you’re aware, the political response to this–and to legitimize Guantanamo Bay Prison–has been to deny the term “prisoners of war” to those we tortured and continue to torture.]

Over half of the country thinks that torture can be justified.   Considering the country is mostly Christian, this is troubling.  Here’s some nice images from a recent FiveThirtyEight.com post by Brittany Lyte:

That reads as 19% say torture is “often” justified, 33% “sometimes,” 18% “rarely,” and 22% “never.”  The yea/nay divide does not come down to party line.  Plenty of Democrats support torture, and some Republicans are against it.

The yea/nay divide also does not come down to religious lines. A breakdown of a 2009 Pew Research poll shows this quite clearly.  It doesn’t show the entire demographic breakdown (too small of sample size maybe?), but the ones it shows are telling.  Only 20% of “White non-Hispanic Catholics” agree with the Catholic Church’s unequivocal stance that “torture is an intrinsic evil.”

It’s across the board, ladies and gentlemen: we like torture in this country about as much as we believe in Jesus.

We’re all sober now, I hope.  I did not hear a sermon yesterday reminding the congregation that we should unconditionally be against torture, so I’m guessing people will just continue on their merry way, happily thinking torture is just another political idea.

Torture is not a political issue. Torture is a moral issue.  And morally, theologically, ethically, whatever-y, arguments for torture are easy to dismantle.  Torture inherently values information over people, torture blatantly misuses power and authority, and torture–by definition–abrogates the dignity of the victim…and these just scratch the surface.  Even if you accept the arguments of Just War Theory, torture is an unacceptable and morally abhorrent option.

But–to get back to my title–I want to be clear about something else.

Jesus was not tortured.  Not in the modern sense.  Only in the Gospel of John does Pilate brings Jesus back out after he had been beaten and impaled with thorns in the mocking shape of a crown.  The synoptics (Matthew, Mark, and Luke) move straight from the mockery into the crucifixion.  But even in John’s Gospel, there is no sense of interrogation after the beating.  For John, Pilate uses the mockery and abuse as a public display of power and a proof-text of Jesus’ false claims–“Ecce homo!  Look at this pitiful and beaten man!  How can this man be powerful?  How can this man be your king?  Do you really need to kill him?”

Instead, Jesus was a victim of state-sponsored capital punishment, a kind which we would all be quick to call “cruel and unusual” today.  The capital punishment of Jesus’ time was meant as a deterrent, and thus was public, bloody, and humiliating.  Of course, Jesus’ abuse and execution was not cruel and unusual back then. It was status quo–like the “lethal injections” that we approve today, or the use of the electric chair just a few years ago.

This fact–that Jesus was not tortured in the modern sense–should not weaken any arguments.  I’ve written about the importance of realizing Jesus’ limited realm of human experiences before, so I’ll simply say that it is better to be straightforward about Jesus’ personal experiences rather than assume that he experienced “the worst of all possible deaths” on the cross.  Jesus was beaten and crucified, naked, in public, and it must have been excruciatingly painful.  This experience is not why we can say that “Jesus walks with us as we suffer.”  Jesus did not feel of pain of living with the death of a child, for example, nor was he tortured for months on end.  Jesus walks with us as we suffer because Jesus is God.

In this sense, however, Jesus was tortured.  If we take Matthew 25 seriously (and we should), one can find Jesus in even the beaten, tortured Muslim in Guantanamo Bay.  Human dignity does not come from claiming you are Christian: human dignity comes from being a child of God’s creation.  If we can see Christ in the homeless, we must see Christ in the torture victim.

I almost wish the torture report would have said that torture produced helpful results, because the Christian argument would have been so much more clear.  As the report confirmed previous studies that torture produces unreliable information, people are left arguing “well, torture doesn’t work anyway, so it’s not worth the blood on our hands.”

That’s not the f***ing point.  I don’t care if torture gave us the GPS coordinates of every terrorist cell from here to Pakistan.  If we, as Christians, fail to see Christ in the torture victim, how can we see Christ in our family members?

Indeed, how can we see Christ at all?