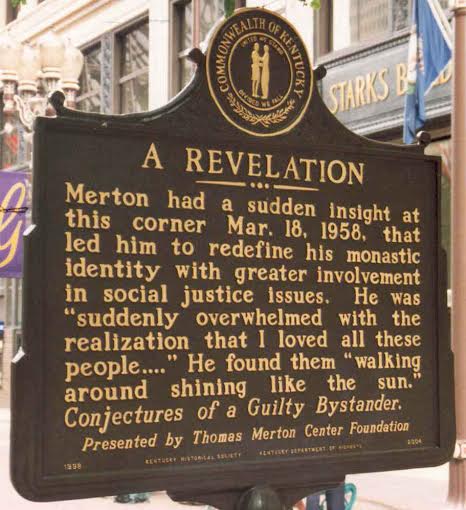 “John XXIII seems to me to be a most wonderful Pope and I love him already very much – he is a kind of simple person with a lot of good sense and all of a sudden he seems to me, for this, for his simplicity, to be a great man and I cannot help feeling right away that perhaps he is a saint.  My kind of saint – who smokes a cigarette after dinner.”   –November 8, 1958 (1)

On Palm Sunday 1960, a friend of Pope John XXIII, Lorenzo Barbato, visited Thomas Merton bearing a gift from the Holy Father – a stole blessed and worn by the pope.  We don’t know exactly why John XXIII sent this stole to Merton, though we know that John expressed interest in Merton’s ecumenical work and his writings on peace.  Whatever the reason, Merton was thrilled with the gift, writing the following in a letter to the pope:

“How can I express to you my gratitude and the emotion with which I received the honor bestowed on me by Your Holiness in sending me this beautiful stole, worn and blessed by Your Holiness.  It is truly the greatest honor of my life.”       –Letter to Pope John XXIII, April 11, 1960 (2)

And when Pope John XXIII died, Merton movingly articulated his love for him:

“May he rest in peace, this great and good Father, whom I certainly loved, and who has been good to me, sending me the stole and many blessings.  And I don’t think he has stopped being a father to us, to me.  He will one day be canonized, I think (if we last that long), and I do not hesitate to ask for his intercession now.”  –June 4, 1963 (3)

Merton was right.  Pope John XXIII would be canonized, raised to the altars by Pope Francis, a man many justifiably compare to the “good pope,” particularly for his simplicity and pastoral sensibilities, not to mention his propensity to raise the hackles of traditionalists.

Moreover, in the year-and-a-half since he was elected, Pope Francis’ pontificate has been marked in part by an emphasis on ecumenism and on issues of peace and justice, precisely those ideas that appeared to bring Merton before the attention of Pope John XXIII.

It makes sense, therefore, that Pope Francis’ trip to the United States next year should include a visit to Kentucky in order that he might connect with a figure of great importance in the history of American Catholicism and one whose writings on contemplation, justice, peace, as well as interreligious and ecumenical dialogue correlate so closely with key themes of Francis’ pontificate.

It makes even more sense when one takes into account that 2015 marks the 100th anniversary of Merton’s birth, and celebrations to mark the centenary are planned throughout the year, including a conference in June at which the Rt Rev. Rowan Williams, former Archbishop of Canterbury and friend of Pope Emeritus Benedict XVI, will give one of the plenary lectures.  What better time for Pope Francis to draw attention to Merton?

Were he to come to Kentucky, I’d suggest the following itinerary.  Pope Francis would first make a brief visit to the Merton Center at my school, Bellarmine University in Louisville.  In 1967 Thomas Merton named Bellarmine the official repository of his manuscripts, letters, journals, tapes, drawings, photographs, and memorabilia, and the Merton Center (established in 1969) currently houses well over 50,000 Merton-related materials.  The pope would see on display the stole given to Merton by Pope John XXIII, a cross given to him by Pope Paul VI, and a few of Merton’s personal effects – his camera, glasses, coffee mug, and cowl.  He would also see the vast number of books that contain Merton’s marginalia, books ranging from Camus in French, to the Fathers in Greek and Latin, to St John of the Cross in Spanish.

The pope could proceed from there to the iconic 4th and Walnut (now 4th and Muhammad Ali) in downtown Louisville where Merton experienced a well-known revelation of unity with the people he saw.  In his description of this experience, Merton criticizes the illusion that his own monastic existence is somehow separate from the existences of all those people around him.  One can almost literally see Merton here turn back toward the world, to see the world and the people within it as good:

“I was suddenly overwhelmed with the realization that I loved all those people, that they were mine and I theirs, that we could not be alien to one another even though we were total strangers…It was as if I suddenly saw the secret beauty of their hearts, the depths of their hearts where neither sin nor desire nor self-knowledge can reach, the core of their reality, the person that each one is in God’s eyes.  If only they could all see themselves as they really are. There would be no more war, no more hatred, no more cruelty, no more greed….I suppose the big problem would be that we would fall down and worship one another.”  (4)

Maybe Merton’s turn toward the world was another reason Pope John XXIII liked him.  For we find in John a similar turn toward the world in his opening address to the Second Vatican Council, in which he lamented those “prophets of doom” who saw in the world “ruin and calamity,” and instead proposed that “human society seems to be entering a new order of things” through the guidance of divine providence.

Pope Francis expressed something similar in his interview with Antonio Spadaro, SJ: “The complaints of today about how ‘barbaric’ the world is – these complaints sometimes end up giving birth within the church to desires to establish order in the sense of pure conservation, as a defense. No: God is to be encountered in the world of today.”

In that last sentence, Francis summed up Merton’s 4th and Walnut experience as well as his later efforts for peace and justice.

Pope Francis’ Kentucky visit would conclude by a trip out to the Abbey of Gethsemani, an hour south of Louisville.  Here the pope could talk with monks who knew Merton, visit Merton’s grave, and spend some time in silence and prayer at the hermitage Merton called his home for the last three years of his life.

I don’t know how much Pope Francis knows about Merton and his writings.  I’ve found no explicit references to Merton in anything he’s said or written so far.  But the points of convergence between Merton and Pope Francis are many, and I’ve little doubt that his writings would resonate with the pontiff as they appeared to do with Pope John XXIII.

And were he alive today, I’ve no doubt that Merton would feel the same love for Pope Francis that he did for Pope John XXIII.

Gregory K. Hillis, Ph.D. is associate professor at Bellarmine University where he directs the Master of Arts in Spirituality Program.  His blog is My Unquiet Heart, and his Twitter handle is @gregorykhillis.