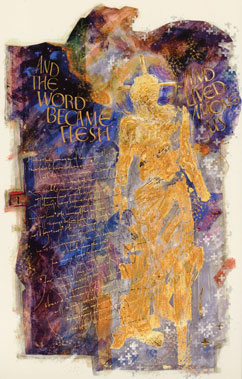 I once had the good fortune to learn about the Gospel of John with the world-renowned Biblical scholar and prominent “historical Jesus” expert, John P. Meier. Despite our semester-long engagement with this one gospel, my notes indicate we only made it through Jesus’s encounter with Pilate (18:28-19:16). This gives me a little comfort in trying to say something intelligible about the Gospel of John in one blogpost as well as a little direction.

I want to focus on and isolate three things that I learned from John Meier[1] as a way of getting into the Gospel of John: 1) “everything’s bigger in John”; 2) John’s Gospel is characterized by “ambiguity and misunderstandings”; and 3) there is a “Christological implosion” in the Gospel of John.

Meier delighted in telling us that the Gospel of John was like Texas: everything here is bigger and better. Though some of the seven “signs” (in John’s terminology) overlap with synoptic miracles—especially the feeding of the five thousand (Sign #4) and the walking on the water (Sign #5) in John 6—the miracles described by Matthew, Mark, and Luke are often dwarfed by the signs in John. Take a few examples:

Why this focus on bigger signs? One aspect certainly ties in with John’s Christology. As evident in his famous Prologue, Jesus is the creator walking among us: “All things came into being through him, and without him not one thing came into being” (John 1:3, NRSV). As the Word created, so also the Word dwelling among us—this Jesus of Nazareth—controls creation.

Perhaps even more substantially, though, these signs feed into the theme of conflict which runs throughout the Gospel of John. Unlike the other gospels, John contains references to followers of Jesus being expelled from the synagogue (9:22; 12:42; 16:2). Scholars believe this is a later event which happened to the community to which John’s Gospel was addressed; the Johannine author retrojected it into the text. Issues of legitimation and authority in some ways lay behind these more extraordinary elements of John’s signs, but it also shows that this was a community that longed to feel present to the figure portrayed in this gospel.

Meier frequently pointed out how the Gospel of John depicts Jesus almost as an extraterrestrial: E.T. could communicate more easily with people than Jesus appears to. There does not appear to be a single Johannine conversation in which someone talking with Jesus understands him immediately, not even the disciples! This ambiguity and misunderstanding comes with another strange feature: there are no narrative parables in John’s Gospel.

According to Meier, this is a result of the different universe which John’s Gospel portrays: the Word comes from above, descending into time in Jesus, only to return to the Father through the cross and resurrection. This literal alien intrusion twists the logic of parables, and John’s Gospel reflects that in Jesus’s discourses. Instead of saying, “The Kingdom of God is like x,” John’s Jesus says, “I am x.” As Meier said,

“Jesus’s discourses in John demonstrate a reverse logic from the narrative parables. Narrative parables have a beginning, middle, and end. Jesus has no beginning or end: he is just eternal. Telling stories would imply that the heavenly archetype came to be, is, and will cease to be. Thus, John’s narrative [about Jesus from 1:19 forward] is a straight ascending line, but Jesus’s discourses are ascending spirals, not neat narrative stories with beginning, middle, and end.”

This seems reinforced by those who finally start to understand what Jesus is saying: their common thread is that they all remain with Jesus. Among others, the Samaritan woman (John 4), the man born blind (John 9), Mary Magdalene (John 20), and the disciples all learn who Jesus is and what he is about  by “abiding” with him, that great Johannine catchword. It is also perhaps the most important lesson for us: to understand and live with Jesus, we must stay with him, abide with him, even in our confusion, even when he doesn’t appear to be present (as Mary Magdalene abided at the tomb even after Peter and the beloved disciple left in John 20).

Perhaps the strangest feature of John is how everything seems to collapse into Jesus. Many of Israel’s most potent symbols—the light of the world, living water, manna, the serpent lifted up to heal those bitten by snakes, the shepherd—are completely sucked into the density of Jesus. As Meier notes, John describes “not a Christological explosion (e.g., atomic fission) but implosion (hydrogen fusion)”:

“Everything that is a structure in religion is collapsed into the person of Jesus. Christology becomes the black hole in the Johannine solar system. There is no theme of discipleship; there is no ecclesiology (except maybe in John 21): all the various theological themes in the synoptics are either minor or missing, since everything has been swallowed up in John by Christology.”

On the one hand, this leads to some disturbing results. Some of the most troubling passages of John deal with “the Jews” (a term only used in John’s Gospel) as the group who rejects Jesus. Christians have to wrestle with the long and bloody history of anti-Semitism spawned from passages like John 8 or the Johannine Passion narrative. They also have to face the troubling possibility that John’s exclusivist and supersessionist stance might not be incidental or conditioned by historical circumstances but intrinsic to such a sweeping Christological vision. This is one scriptural “stumbling block” which continues to trip me up: is this intrinsic to John? Must it be intrinsic to Christianity? (I owe this insight about supersessionism to Alan Mitchell in a Facebook exchange.)

On the other hand, this vision also ties in with the beautiful, sweeping midrash[2] which opens John’s Gospel and its historical exegesis in John 1:6-18. From John’s vantage, all of creation can be seen in the light and life (John’s two favorite terms) which come from Jesus, because all light and life come from the creative and re-creative power he receives from the Father. If even the cross can be the throne of this one as he returns to the Father, if “the light shines in the darkness and the darkness did not overcome it” (John 1:5), nothing can be excluded from his creative power.

Conclusion: Seeing the World in Christ

To see everything in Christ is to assume a new perspective. This perspective is not only characteristic of John: it is what John’s Gospel aims to instill in the reader (cf. John 20:31). It enables one to see one’s own conflicts, troubles, and tribulations in the events of Jesus’s life (though hopefully in a way different than the exclusionary and vicious way John’s community often did). It enables ambiguity, paradox, misunderstanding to remain, especially within ourselves. Such a perspective only asks us to stay with Jesus, to beg for his Paraclete, to remain in the community where faith in Jesus lives. If we stay long enough, if we allow our hearts, our lives, and our world to become a place where Jesus abides with us beyond our constant misunderstanding and sin, then Jesus and the Father might come to us and make their home with us (cf. John 14:23), and we might taste eternal life even now (cf. John 17:3).

[1] The following quotations attributed to Meier come from my notes during the spring semester of 2010 at the University of Notre Dame. Any errors or misinterpretations are my own, though I think the general gist and even phraseology are Meier’s. I must also note that the general arrangement and placement of quotations may not directly reflect how Meier used these examples in-class: that is part of my own creative treachery (every interpreter being a traitor and all…).