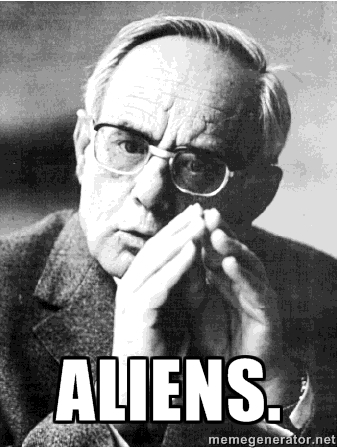 On Monday, May 12th, Pope Francis framed his homily around the day’s reading from the Acts of the Apostles, the episode when Peter is forced to recognize the common humanity and valid desire for baptism among a group of pagans. It is easy to be tempted to limit the work of the Spirit, Pope Francis suggested, but we must always push beyond the limits of our understanding of how God works. Peter welcoming and baptizing the pagan Greeks was a radical departure from previous practice—they weren’t even circumcised! It would be as if, Francis explained, “Martians” landed on earth today and declared that they wanted to become Christian. “What would happen?”; it would be revolutionary for the Church and it would go beyond any and all existing rules about baptism, but, Francis asked, “Who are we to close the doors” to the work of the Holy Spirit? As bizarrely theoretical as Pope Francis’ “Martian baptism” conjecture seems, it is in fact one of the many important theological questions raised by theologians whose scholarly work focuses on our ever-expanding understanding of the universe and the distinct possibility of life on other planets. There is even a name for the field of theological study which explores the theological implications of extraterrestrial life: exotheology. A quick internet search on the topic of Catholicism and alien life will reveal that crackpot and conspiracy theory sites vastly outnumber the few reputable sites for official Vatican documents and theologians’ statements on the topic by one hundred to one. Every possibility is considered, from evidence of alien contact in the Bible to the Vatican’s plans for future alien contact. But, setting aside the more outrageous theories—such as that aliens have already made contact with Earth and have in fact infiltrated the upper echelons of the Vatican, in addition to Hollywood and the American government—would a reasonable, reputable theologian dabble in exotheology? Many already have.

A handful of Catholic theologians (as well as Protestant theologians and Jewish rabbis) have discussed the possibility of extraterrestrial life and the implications for our faith. Thomas O’Meara, OP, is perhaps one of the foremost experts on exotheology, and has written articles and even a book on the topic, Vast Universe: Extraterrestrials and Christian Revelation. Likewise, Monsignor Corrado Balducci has appeared on a number of Italian television shows to discuss his thoughts on extraterrestrial life and has, like Fr. O’Meara, collected statements from Catholic Tradition and from modern Catholic theologians and scientists which shed some light on the subject. Moreover, many Catholic scientists, such as Vatican astronomer Fr. José Gabriel Funes, have also issued statements, written books, and held conferences on the issue of reconciling theology with the advances of astronomy. In fact, a new book by Guy Consolmango, SJ, and Paul Mueller, SJ, of the Vatican Observatory, will be published later this year called Would you Baptize an Extraterrestrial? …And Other Strange Questions from the Inbox at the Vatican Observatory. But conjecture on the possible existence of extraterrestrial life is one thing; the Pope claiming that he would baptize Martians is another. Is it prudent or even ethically permissible to baptize a being so foreign? Moreover, is baptizing a newly discovered group—whether a group of Greek pagans in the first century, a tribe of indigenous people in sixteenth-century Mexico, or a band of extraterrestrial explorers today—actually a selfish act, a manifestation of Christian colonization? We may well ask, with our modern sensitivities, “Who are we to impose our beliefs?” But Pope Francis suggests that we ask another question, one considered by Peter in Acts and one that is surprisingly akin to the sorts of questions asked by sixteenth century missionaries regarding native populations: if the Holy Spirit moves the “other” to seek baptism, who are we to close those doors? The discovery in the West of vast continents and large populations unknown to Europeans and the increase of trade with and exploration of lands to the south and east of Europe in the fifteenth and sixteenth centuries was a watershed moment for the European Christian understanding of the world and of Christian mission in it. Many Europeans, taught by such ancient authorities as Herodotus, believed that foreign lands were inhabited by monsters and half-human creatures. Faced with the existence of people in these strange new worlds, many enterprising explorers responded with acts of horrific atrocity: the rape, slaughter, and enslavement of people believed to be sub-human. In response to these atrocities and in the hope of helping missionaries who worked to protect and minister to these newly-discovered populations, Pope Paul III promulgated the document Sublimus Dei in 1537. In this document the Pope stated that the indigenous people of the “West and the South, and other people of whom we have recent knowledge” were in fact human beings possessing souls (“truly men”), and that they were also capable of understanding and receiving the faith (the medieval measure of rational intelligence). They were not to be treated as “dumb brutes created for our service,” they were not to be enslaved (and the enslaved were to be freed), their rights to life and property were to be recognized, and their “exceeding” desire to receive baptism and catechesis was to be honored by missionary endeavors. This document and its insistence on the humanity of the native populations may sound mundane to modern ears, but we must understand how revolutionary the discovery of unknown populations was and just how radical the pope’s statement must have been. My favorite professor of Church History once explained it in this way: “Imagine if suddenly we discovered intelligent alien life on another planet. And then the Pope wrote a document declaring that, not only did the aliens possess souls, but that they were to be treated as equals and they should be baptized if they express the desire. It was that revolutionary.” Of course, my professor wasn’t the first person to connect the tradition of sixteenth century missionary work to the possibilities of extraterrestrial life: the ingenious sci-fi novel The Sparrow by Mary Doria Russell imagines the discovery of life on other planets and the experience of first contact through the lens of Jesuit missionaries. Imagine if, just as the Jesuit missionaries traveled alongside the explorers of the past, the exploration of new worlds in the future included Jesuit specialists in astronomy, botany, and linguistics.[1] While on the alien planet, the characters struggled with issues of faith alongside the inevitable issues of space exploration, culture clashes, and the translation of languages and ideas; on earth, the Church has a difficult time reconciling these new discoveries with centuries of tradition.

Exotheology, like Peter and the pagans, Paul III and the native populations, Francis and the Martians, looks at the incredible advances in astronomy and physics and at a limitless universe and pushes us to reimagine God and God’s merciful love beyond the limits of what is already known. If pagan Greeks sought baptism from Peter, natives of Asia, Africa, and the Americas sought it from sixteenth-century missionaries, or Martians might seek it from Pope Francis, and we are not to “close the doors” to the radical work of the Holy Spirit in these cases, so exotheology urges us to go “beyond the limits” of our narrow understanding of a divinely created universe and to give glory to our God whose reach is unimaginable.
[1] If you choose to read The Sparrow I highly recommend that you also read its sequel, Children of God.