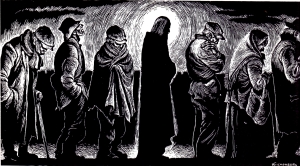 Mattew Shadle, a contributor at Catholic Moral Theology, provided a thoughtful response to my piece from last week entitled “Postpartisan? The Importance of Labels and Language.” Here I would like to address a few of the points he made.

Shadle argues that in its essence, the policy at America Magazine, and the postpartisan movement of Catholics in general, centers around the use of the terms liberal, moderate, and conservative within an ecclesial context. Expressing doubts about the application of these political labels to theological debate on ecclesial issues, the postpartisans worry that partisan identities are, or have already, colonized Catholic identity (which I surmise is not itself considered “partisan” by the postpartisans, or is perhaps a good kind of partisanship as compared to others?). Further, politically partisan terms are said themselves to be simple stereotypes that are devoid of content, pre-critical, and reductionist. Thus it is argued that we must challenge these partisan labels in the light of our faith such that we do not make any easy equivalence between our political and ecclesial stances.

By way of address, let’s begin with the issue of context and boundaries. Shadle rightly perceives that I might object to what I see as the positing of a separation between political and ecclesial contexts. He claims, along with Malone, that while it is true that our faith may have implications playing out in ways that could be described as liberal or conservative, it is an entirely different thing to claim that our faith itself should be so described. But what is this difference between faith and the implications of faith? Where does faith “reside” so to speak? Is faith belief that then gets played out in actions? Or is faith action that becomes codified in belief? Is faith both belief and action, distinguishable poles between which the electric current of faith is birthed and sustained? Shadle hints at how he might answer such questions in his definition of Catholic social teaching as “those principles and policies that flow from our faith.” I would describe Catholic social teaching differently, I would describe it as the codification of the principles and policies arising out of lived discipleship. Faith, in this sense, is the gifted movement of head, heart, and hands such that each informs the other. While one can then distinguish the different aspects of this movement, they cannot ultimately be separated, and yet I believe such separation is at the unconscious and perhaps even unintended heart of Shadle’s notions of faith and the ecclesial.

To claim that the entity “faith itself” can be so separated from the world that it cannot be described using the language of political partisanship is to understand faith in a way that dehistoricizes, decontexualizes, and therefore spiritualizes it, or perhaps locates it within the realm of intellect and will (which amounts to spiritualization), or reduces it to the “deposit” of propositions expressed in doctrine. While there is clearly a spiritual aspect to faith, it is not constitutive of faith itself. Like all things in our world then, faith is intimately bound up with the total social, political, and economic frameworks in which we live. It is precisely because faith is lived that its structures, inflections, and expressions – on all three levels of head, heart, and hands – are inevitably tied to the limits of our way of being and to the possibilities for any shifts or transformations in the latter as well.

This is most easily seen in the structures of the institutional Catholic Church as they have shifted from the communitarianism of the early faithful in Acts, to the monarchical expressions of the Counter Reformation, to the “return” to collegiality inspired by modernity (which is not to say that forms of hierarchy and authority were not present in each). These different ecclesial structures were formed by and in turn informed the political, social, and economic structures from which they arose. Consequently, each pattern of these ecclesial structures can be described in political, social, and economic terms – as I just did with the titles “communitarianism,” “monarchical,” and “collegial.” Likewise, we find that the doctrine and practice of religious freedom, for instance, was actively condemned within the monarchical ecclesial structures while the communitarian and collegial structures seem to be open to such tolerance, with the latter even advocating it officially. Within an American context, we could go even further and compare these structures and their resulting doctrines and practices to our own notions of liberal and conservative, lining up the monarchy and religious intolerance on the conservative side and communitarianism, collegiality, and religious freedom on the other.

This brings us to a crucial point in the debate, that is, the claim that these terms – liberal and conservative – are devoid of intelligible or meaningful content other than that of “progress” or “return,” such that they fail to grasp the nuance and intricacy of life. Well, yes. All language fails to capture the nuance and intricacy of the world. This is not the fault of particular words but rather part of the nature of being finite creatures. There are not and will not be terms that perfectly capture the contradictions, resonances, and sometimes utter ridiculousness that is our political, social, economic, and ecclesial life together. More importantly, my dog in this race is not about defending the use of “liberal” and “conservative” per se. The larger and more important concern on my part is the threat I see in attempting to carve out some space of ecclesial or faith-based neutrality. For those who have suffered under the weight of certain supposedly “neutral” doctrines, structures, traditions, and practices that have been and are part of the Church universal, that is, for the colonized, straight women, lesbians, the indigenous, the divorced, etc., the idea that faith itself, or the ecclesial structures and expressions of faith, or Christianity, is somehow outside of political, social, or economic description is almost laughable. I don’t particularly care whether you use the terms liberal, conservative, socialist, ultramontanist, Docetist, progressivist, modernist, postmodernist, etc. What I care about is the fact that labels provide the ability for classes of people to organize themselves to stand for their human dignity. Labels are essential for this. So, as vacuous as political labels sometimes are, and in this I am in agreement with Shadle and Malone, the underlying theory that the context of faith, theology, and the ecclesial is not appropriate for political, social, and economic analysis strikes me as very dangerous.

Shadle asks, almost in reply, what might be the libertarian perspective on the new Missal translation or the socialist view of the teaching authority of episcopal conferences or the populist position on the self-consciousness of Jesus? I’ll tell you. Every single thing the Church does is part of what is called the implicit curriculum, that is, a background pedagogy that forms people in their consciousness and worldviews. When the Missal translation comes from a Roman Congregation with little or no input from the average person or even the majority of parish priests, you’re saying something about the nature of authority, about the place (or not) of one’s voice in any overarching system, you’re forming people in their response to and interpretations of the larger world (which, again, is not some space cordoned off from faith and the ecclesial). You can argue over my interpretation of the Missal translations here, but to do so you have to have recourse to a language that takes the distribution and deployment of power into account, a language that analyses social structures and the individuals therein, a language that brings the system and the individual to the fore, in other words, the language of politics. This is as it should be. And so goes for the questions of episcopal conferences and the theories of Jesus’ self-consciousness (the latter, paradoxically, probably being the most political of all). Regardless of the sometimes vacuous use of terms like “liberal” and “conservative,” they can absolutely be applied to each of these scenarios, but again, these terms themselves are not my main concern.

Of course, if people are blindly applying political labels to their faith and the Church in ways that do not make any distinctions at all then we need to have a dialogue about the state of religious and civic education in our country. Similarly, if people are using “liberal” and “conservative” in ways that are simplistic or unhelpful then let’s think again about education, or the role of the media, or political apathy, or… The answer is not to cordon off the areas of faith, theology, and ecclesial structures from political descriptions and analyses; trying to give them a zone of “neutrality” they never and cannot ever have. While we can of course distinguish Christian faith from other areas of life, we can never separate out a completely Christian, ecclesial, faith-based context because such a context does not exist. Indeed, the times in history when this kind of pseudo-context of Christian neutrality was proffered as a viable and veritable reality are precisely the times when the most damage was done; think of Central America in the 1980’s, the spread of Christianity in the sixteenth-century, and on and on.

I have absolutely no doubt that Shadle, Malone, and other postpartisans are advocating for what they think is best for the Church and the world at large. I’m not trying to equate them personally with Church backed military juntas or with wielding oppressive power over others. I am, rather, trying to uncover the logic behind my own and others distaste for, and indeed fear of, any program claiming Christian, Catholic, ecclesial, or faith-based neutrality. Whether they can see that such logic is subtly at work in their own efforts I do not know, but the implicit curriculum postpartisanship brings with it is surely on the side of powerful, on the side of those who can afford to be neutral. Neutrality does not bring peace and reconciliation, it simply allows the powerful to define those topics and practices that are now off limits for criticism. Is there anything so sacred? Perhaps in the next life, but in this life making things off limits by sacralizing them seems to breed the abuse of power, just ask Jesus. I guess you could say that in this sense, I’m postneutral.

While I hope and pray for the unity of all believers, I nevertheless live in a world where those claiming Catholic identity have impoverished and lived off the backs of others who claim Catholic identity and used doctrine, faith, and ecclesial structures to justify and carry out their domination. I live in a world where some would forever banish from Catholic identity the coexistence of lesbian or gay identity. I live in a world, that is to say, in which Christian praxis cannot be understood as beginning with a neutral space occupied equally by all Christians who then descend into the world below with the light of faith shining in one direction and only then and there discover political, social, and economic differences, labels, descriptions, conflicts, interpretations, that is, the general messiness of the very same world in which the Word became flesh.