This weekend marks the 27th anniversary of “Hands Across America,” a cultural event of the 1980s where people of all walks of life joined hands in hopes of forming a human chain that zigzagged from the mid-Atlantic to Los Angles. Why on earth would over five million people stand in the street holding hands across a 4,000-mile human chain for fifteen minutes? The hope, at least according to the organizers was to raise money and awareness of hunger and poverty in the United States and abroad. Is there any value in such an event? Or was it, as some commentators wrote, a waste of time. 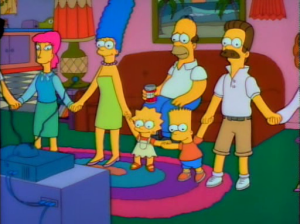 The list of participants in the 1986 event was impressive. They included a who’s who of 1980s culture: Cardinal O’Connor of New York, Edward James Olmos, Yoko Ono, Bill Cosby, Barbara Streisand, Scott Baio, Billy Graham, Michael J. Fox, Kenny Rogers, Richard Dreyfuss, Bill and Hillary Clinton, and John Stamos. (The cringe-inducing promo video highlights many of these celebrities).  Of course what event in mid-80s would be complete without the participation of Michel Jackson, Tony Danza and Chewbacca the Star Wars Wookie. Even Lisa and Bart Simpson got in on it.

Although, Ronald Regan controversially blamed poverty and hunger on the ignorance and laziness of poor themselves in the weeks leading up to the event, he too joined the human chain in Washington along with other politicians, including the democratic speaker of the House Tip O’Neill.

Today, such an impressive gathering of people in our polarized and divided country, even for a feel-good sing-a-long seems impossible. It’s hard to imagine anyone or any cause that would get people who are so divided to hold hands. The brain behind the event was the Hollywood producer Ken Kragen, who helped to form the group USA for Africa to organize the We Are the World Fundraiser in 1985.

Unfortunately, the event could have been better organized. Only $20 million of $34 million raised went to charitable causes. Many critics at the time portrayed the event as little more than a celebrity stunt. Others, like Ted Kennedy, criticized the event for not including all states or regions of the country.

While there are certainly questions as to the effectiveness and cost of such events, high-profile efforts are not foreign to the Catholic social imagination. Catholics have long seen the value in public manifestations of faith and beliefs from public processions on feast days to symbolic peace events like the 1986 gathering of religious leaders in Assisi for the World Day of Prayer for Peace (incidentally, the same year as Hands). The whole idea of the Hands Across America, in fact, seems very Catholic in many ways. The act of holding hands with others is reminiscent of those parishes where people join hands during the Lord’s payer. The cheesy lyrics of the theme song of Hands, even sounds like something that Pope John Paul II could have written:

“See these people over there?
They are my brother and sister
When they laugh I laugh
When they cry I cry
When they need me I’ll be there by their side

Symbolic events like Hands can be effective means of publicly displaying deeper commitments and concerns to one another.

John Paul II captures this well in 1987 as he clarifies the true meaning of solidarity:

This then is not a feeling of vague compassion or shallow distress at the misfortunes of so many people, both near and far. On the contrary, it is a firm and persevering determination to commit oneself to the common good; that is to say to the good of all and of each individual, because we are all really responsible for all. Sollicitudo Rei Socialis, 38

Nearly thirty years after the Hands Across America, would a similar PDS be worth organizing today?

Done in the right way, I would say yes. Social media can help to cut down on organizing costs. Instead of going east to west, the next hands should see America in its fullest sense, by symbolically connecting people south to north from Chile to Canada. Imagine hands linked symbolically across the US-Mexican border fence. Imagine classroom curricula across the hemisphere on inter-America solidarity. Imagine little maps of the Americas on the lower corners of prime-time TV stations.

Might this challenge the way we perceive “America” and “the others” that are too easily dismissed as being far away and beyond our concerns? Educational materials developed in partnerships with NGOs, faith-based groups, cultural centers, teachers and governments could help to ensure that the public display of solidarity leads to a deeper commitment. Getting online social media outlet involved could help to show the complementary relationship between online social networking and the power of networking where people are connected by human touch.

What do you think?