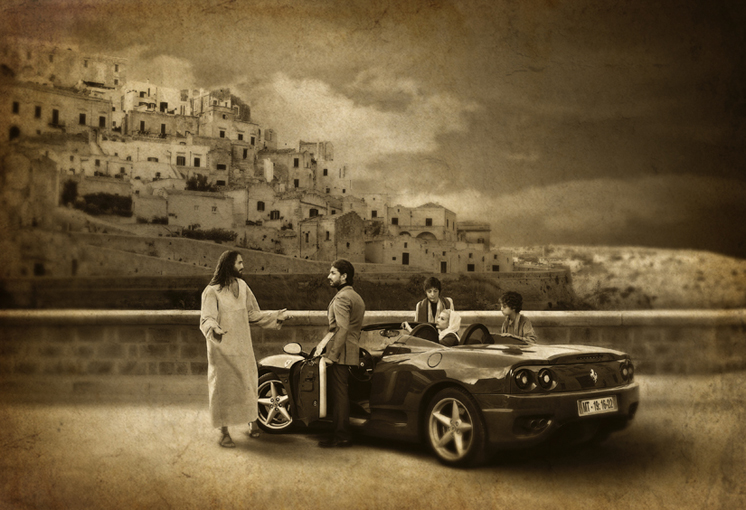 ‘Good Teacher, what must I do to inherit eternal life?’
Jesus said to him, ‘Why do you call me good? No one is good but God alone.
You know the commandments:
“You shall not murder; You shall not commit adultery;
You shall not steal; You shall not bear false witness;
You shall not defraud; Honor your father and mother.” ’
He said to him, ‘Teacher, I have kept all these since my youth.’
Jesus, looking at him, loved him and said, ‘You lack one thing;
go, sell what you own, and give the money* to the poor,
and you will have treasure in heaven; then come, follow me.’
When he heard this, he was shocked and went away grieving, for he had many possessions.
(Mark 10:17-22; cf. Matthew 19:16-22, Luke 18:18-23)

I suspect that the story of the Rich Young Man (or Ruler) is one of the Synoptic stories most of us are familiar with. If nothing else, it is the lead-up to Jesus’ saying “It is easier for a camel to go through the eye of a needle than for someone who is rich to enter the Kingdom of God” and “For God all things are possible.” I also suspect that the takeaway from this story for most is some version of giving away your possessions, being charitable, and living simply. Don’t let your possessions prevent you from following Jesus – from being a disciple. Sounds fair to me.

I have heard many times about the radical-ness of this story. Jesus does not counsel the rich young man to pare down his possessions to a more manageable, sustainable amount. It’s “sell what you own,” which sounds a bit more total. And don’t invest that money in a retirement account, by the way, but give it to the poor. In some sense, maybe it serves the rich young man right – he comes across a bit dismissive of the first part of inheriting eternal life: “yeah yeah, I’ve already followed the commandments, what else ya got?”

As radical as it may be, I think it’s fairly easy to imagine giving away tremendous wealth. During a 5 day silent retreat I went on during college, one of the Jesuits gave a reflection on three different couples or pairs and what their lives said about wealth. First was the former King Edward VIII of England and his wife Wallis Simpson. Following his abdication, the pair traveled the world and lived a comfortable retirement in France. They had access to extraordinary wealth and lived like celebrities with little care for using their wealth for the common good.

Second were the Bradys, the benefactors of the Jesuit retreat center we were staying in. In the 1920’s, Nicholas Brady had become tremendously successful in finance, and his and his wife’s devotion to the Jesuits led them to donate substantial grounds to the Jesuits for the founding of a new novitiate. They did wonderful things with their money, but they also retained much of their wealth and continued to live comfortable, privileged lives.

The third pair was Francis and Clare. Francis, the namesake of our new pope, also had access to tremendous wealth. His father was a successful cloth merchant, and Francis was his only son. He had hit what many might today consider the socio-economic lottery. But he rejected it – his patrimony, his wealth, his station – and developed into the saint so widely revered today. Clare was the daughter of a count who intended to marry her off to someone wealthy. She eventually ran away to join Francis, later founding the Poor Clares. Neither of them let wealth or privilege block them from becoming disciples.

So in a sense, it’s not all that difficult to imagine responding to Jesus’ call to the rich young man. While the will to do so might be lacking, the logistics of what that looks like aren’t too complex. But then again, this is based on thinking about rich and poor in terms of wealth and assets. Tangible goods.

How does it change if we think about privilege? I offer myself as an example. Numerically speaking, I am not rich. Actually, I’m in debt. It bought me a masters degree, but it’s still a red line on my financial balance sheet.

But then again, I’ve never really worried about being able to pay it back. I’ve generally been confident that I would get a job that paid enough to afford to service that debt. When my beloved Alero died in December, it took a little work, but I was able to put the money together to replace it with a newer, better car. With my parents help, because I have parents who are not only wonderful but also in fairly good financial shape.

And that’s just privilege in terms of dollars. I’m also white, male, straight, Christian, able-bodied, educated, employed, and a US citizen. Like Francis, I’m a winner of the socio-economic lottery.

What do I do with that when I read these verses from the Gospel of Mark? I struggle enough to keep the commandments, but what would it mean to give up my privileges? Should I give them up? Can I give them up?

Does it mean relinquishing those privileges? I’m not really sure which among them I could actually give away (I’m pretty confident I will remain a straight white educated dude for the rest of my days).

Does it mean trying to help others get the same privileges? Even the playing field? I would think not, since we’re not all going to be straight white educated dudes (nor should we be).

Does it mean using what privileges I have to help the common good? Encourage understanding and acceptance? I can (and plan to) use my education to help others get an education, become more well-rounded persons, get decent jobs, and that seems to be a good. I can try to be in solidarity with those who do not have my privileges.

I can’t say I know for sure what it should look like in any concrete case, but maybe what the story of the Rich Young Man tells us about privilege is that we who are privileged are called to give ourselves to others. Perhaps we might take to heart the hymn in Paul’s Letter to the Philippians:

Christ Jesus,
who, though he was in the form of God,
did not regard equality with God
as something to be exploited,
but emptied himself,
taking the form of a slave,
being born in human likeness.
And being found in human form,
he humbled himself
and became obedient to the point of death—
even death on a cross.
(Phil. 2.5-8)

Again, I’m not really sure what that looks like. Just something I wrestle with. I leave off here not with an answer, but with a question: how does the Gospel sound when reconsidered in this light?

Jesus, looking at him, loved him and said,
‘You lack one thing;
go, give up your privileges
and grant them to the marginalized,
and you will be privileged in heaven;
then come, follow me.’
When he heard this, he was shocked and went away grieving,
for he was very privileged.