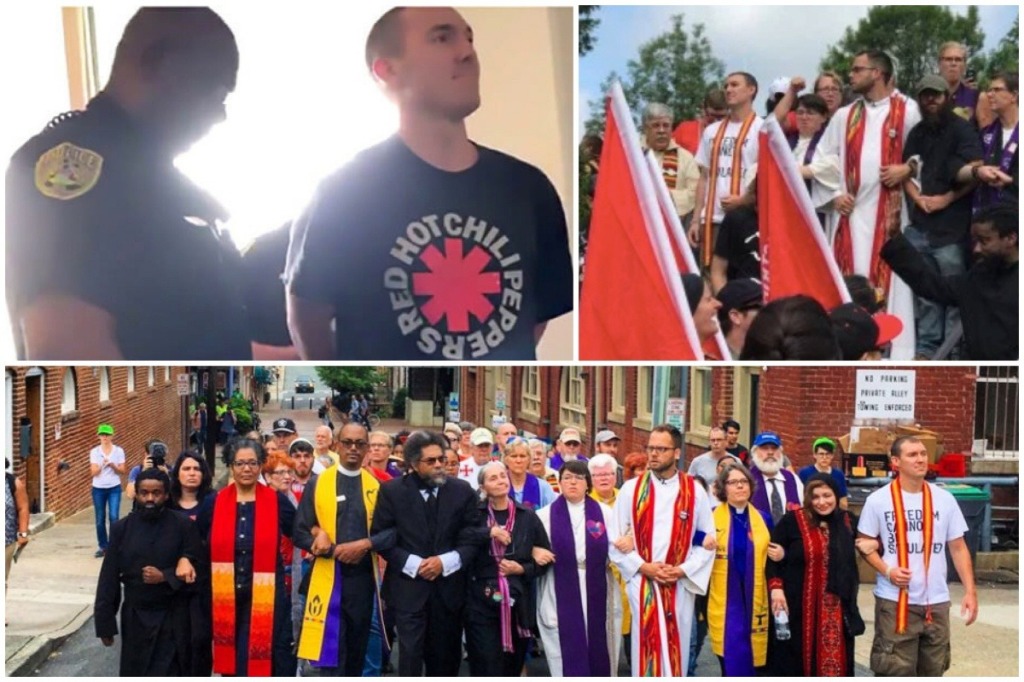 Eric Martin—our colleague, friend, and guest contributor to this blog—faces up to one year of prison time for a trespassing charge levied against him by the University of Virginia for peacefully protesting the presence on campus of “Unite the Right” rally organizer and avowed white supremacist, Jason Kessler. An online fundraiser to defray the cost of his legal fees has been started and we ask your financial support. Donate to his GoFundMe campaign here and raise awareness by sharing on social media with the hashtag #VirginiaIsForPeaceLovers. Any effort to peacefully persuade UVA administration to drop the charge will also be much appreciated.

From the campaign page:

If you’re reading this, you likely know of Eric’s commitments to nonviolence and social justice, and you know that these are commitments that he doesn’t merely espouse, but embodies and enacts–in his studies, scholarship, and teaching; in his work with the Catholic Worker community; and in his life, in the day to day as a part of the Charlottesville community. You’re likely already aware of Eric’s presence as part of the clergy/faith leader counter-protest (organized by Congregate Cville) of the racist white supremacist violent Unite the Right rally on August 12th, and of his faithful presence and actions in continuing to combat white supremacy in Charlottesville–for instance, showing up to offer court support and protest racial injustice at the trials of De’Andre Harris and Corey Long, and joining the protest of Jason Kessler’s bullying and menacing presence at the UVA Law library. And you of course then likely know that Eric was arrested for the action he took at that protest. As Kevin Ahern aptly summarizes in a piece in Daily Theology:

“Martin responded to a call [from] a community leader and arrived to see 35-40 people staring at a private study space given to Kessler, apparently guarded by several police officers. Several students told Martin they did not feel safe in the vicinity of a white supremacist who had already brought violence against students on campus. Martin watched students asking law school personnel why Kessler was allowed on campus and receiving no clear answers. He called the president’s office to ask whether the president was aware of the situation and the receptionist hung up on him before he could finish the question.

Distressed that over eight months had passed since the initial attacks and even after Kessler harassed students the university had taken no action except to give him police protection from the students, Martin decided to enter the room where Kessler was studying and read. Careful not to harass, annoy, touch, intimidate, mock, speak to, or even look at Kessler, Martin simply sat down and began reading The Rise and Fall of Apartheid (part of his dissertation research) across the table.

When ordered to leave by employees, Martin replied that they would have to decide who the threat at that table was, and that he would leave if Kessler were escorted out. Stephen Parr, the law school’s chief administrative officer, ordered police to arrest him, and he received the ban from campus that students had long demanded be given to Kessler, who continued to study in the office with police guard while Martin was cuffed and sent to jail.” (See below for links to more accounts of and stories about the action.)

Following his arrest, Eric was charged with misdemeanor trespassing and his case goes to trail on July 24th, 2018? (though that date may be postponed). If convicted, he could be sentenced to up to a year in jail.

Many of you have already supported Eric (and Anna!!) –through your friendship, by signing this letter to the leadership of UVA , and in a number of other ways. Especially given the gravity of the charges/the legal situation he is facing, I know a few folks have asked if they could chip in for Eric’s legal fees and related expenses–I know I did, which is what prompted this GoFundMe, much to the protest of Eric, of course…

Eric eventually acquiesced to my stubborn requests to make a GoFundMe page to support him as he goes through this legal process, but only after I pointed out that he could use it as an opportunity to also raise money for the Charlottesville Resilience Fund , which raises and distributes funds to meet the needs of people who face undue hardships imposed upon them due to structural oppression, including but not limited to, through the criminal legal system. So, 1/3 of all the money raised on this GoFundMe will go to help meet the needs to others in the Cville community–not only will you be helping and supporting Eric and Anna directly, but you’ll be supporting them in contributing to the commitments they care deeply about and embody in their lives, and help some folks in the community who may not have access to the same kinds of networks and resources.

So, if you would like to, and are able to, support Eric and Anna in this way, please consider giving.  And please share with others.

Much love, and many thanks.

Thank you for your readership and continued support of nonviolent praxis for racial justice.