“Presumably everyone in the country wants peace in one way or other.  But most Americans have prior commitments — or attachments — to other things which make peace impossible.  Most people would rather have war and profits than peace and problems.  Or so it seems.  In such a situation, we speak peace with our lips but the answer in the heart is war, and war only.  And there is a certain indecency involved when Christians, even prelates, canonize this unpleasant fact by saying that the war in Vietnam is an act of Christian love.  Small wonder that certain more sensitive and more questioning people are driven to extremities.”[1]

The “more sensitive and more questioning people” to whom Merton is referring are the Catonsville 9.  On May 17, 1968, these nine – three priests, two brothers, one nun, and three laypeople – entered a draft board office in Catonsville, Maryland, removed 378 1-A (eligible for military service) draft files, and burned them in the parking lot with homemade napalm, the same flammable, gelatinous substance the United States was using to make the bombs the military was dropping over Vietnam.[2]  The nine then waited to be arrested by authorities.[3]  During their trial, Dan Berrigan, SJ, read a statement in court in which he said:

Our apologies, good friends, for the fracture of good order, the burning of paper instead of children, the angering of the orderlies in the front parlor of the charnel house.  We could not, so help us God, do otherwise.  For we are sick at heart, our hearts give us no rest for thinking of the Land of Burning Children.  And for thinking of that other Child, of whom the poet Luke speaks.[4]

On the fiftieth anniversary of the Catonsville 9’s actions, in a world still rent with war and violence, what can we learn from these nine men and women?  Thomas Merton’s words are provocative.  Do we speak peace with our lips but in our hearts want war?  While Merton, depending on how you read his “Note for Ave Maria,” was guardedly supportive or faintly critical of the 9’s chosen path of action, he was not critical of their decision to act.

“The nine realized that this was a criminal act and knew that they could go to jail for it.  They accepted this in the classic nonviolent fashion.  The standard doctrine of nonviolence says that you can disobey a law you consider unjust, but you have to accept the punishment.  In this way you are distinguished from the mere revolutionary.  You protest the purity of your witness.  You undergo redemptive suffering for religious — or anyway — ethical motives.”[5]

While romanticizing the Catonsville 9 would be easy, perhaps it would be more helpful to consider deeply the very real sacrifices that these men and women were ready to make.  George Mische writes of his wife Helene (whom he dubs the tenth Catonsville member) who was left to care for two young children on her own while Mische served his prison term.  The 9 all had “prior commitments” and “attachments,” yet they were willing to sacrifice these things in the name of peace.  What would we be willing to sacrifice in the name of peace?

In his statement before the court, Berrigan asks us to remember “that other Child,” the “child born to make trouble, and to die for it” and makes a compelling connection between this child Jesus and the children burning in Vietnam.  He then echoes Merton’s words:

“Christians pay conscious, indeed religious tribute, to Caesar and Mars; by the approval of overkill tactics, by brinksmanship, by nuclear liturgies, by racism, by support of genocide.  They embrace their society with all their heart and abandon the cross.  They pay lip service to Christ and military service to the powers of death.”[6] 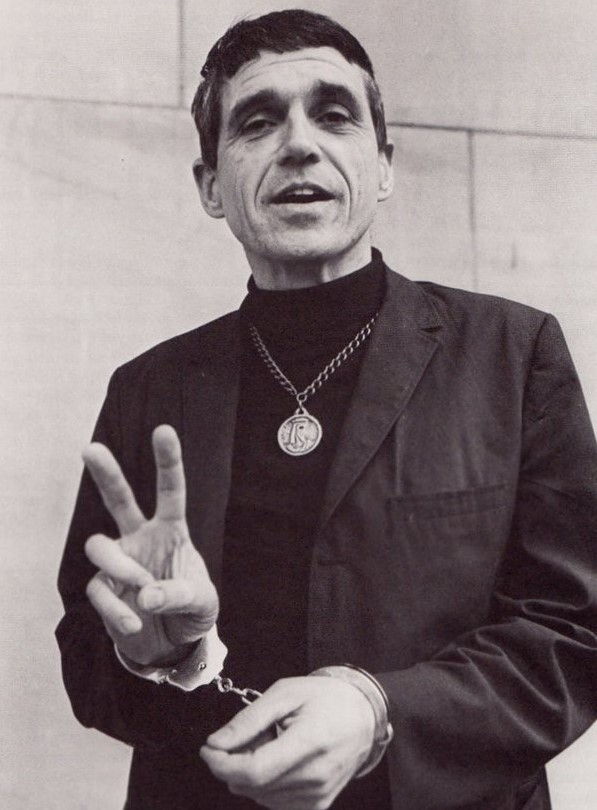 Money, profits, racism, war, violence – often cloaked in the name of Christ – are the “attachments” and “prior commitments” that prevent us, scare us, immobilize us from action.  And yet….  Berrigan does not make this claim to instill in us a sadness or guilt that leads to a paralysis of action.  Instead, he is reminding us that it is in the very hope of Christ that love and peace will win out.  It is Christ’s love that helps us reorder our attachments.  The Catonsville 9 serves as an example of women and men who made great sacrifices in the name of Christ:

In the time of death, some men [and women] — the resisters, who work hardily for social change, those who preach and embrace the unpalatable truth — such men [and women] overcome death, their lives are bathed in the light of the resurrection, the truth has set them free.[7]