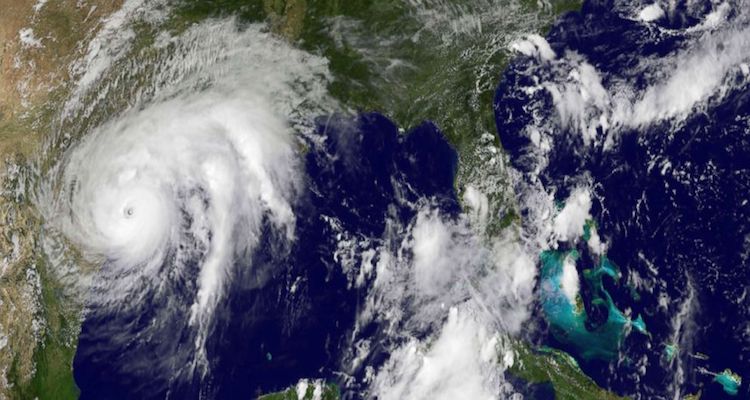 As countless superstorms and other extreme weather events continue to terrorize our global neighbors, I am afraid that the worst storm of them all is the storm of silence.

A recent report by Public Citizen exposes the neglect to mention the link between climate change and extreme weather events in reporting on superstorm Hurricane Harvey. As the title hints, A Storm of Silence exposes the widespread refusal to mention our urgent ecological crisis even among sources such as CNN and MSNBC.

Despite fact that the evidence is in that unprecedented superstorms like Harvey are directly linked to the impacts of climate change, our media is not just denying it, much of our media is remaining silent about it.

What if the media’s silence is an exploitation of the fear of fear that we harbor as a society in the face of our ecological crisis? Dorothee Sölle, a twentieth century German political theologian, who wrote much of her work grappling with the shadow left by Nazism, speaks powerfully to this very situation. She uses the phrase “fear of fear” when describing the non-reaction that comes after feeling paralyzed by grave injustices and catastrophes that arise as a result of extreme globalized capitalism and militarism. In an essay entitled “Against the Death Machine,” (1) Sölle admits to feeling this way many times when witnessing the arms build up that Germany was exercising along with other Western countries in the 1970s. She describes how facing the reality of nuclear arms makes her want to run away, close her eyes, and repress her feelings.

We all feel this way at one time or another. Lately I have felt completely washed out by the string of superstorms Harvey, Irma, Maria, the recent earthquake in Mexico, the wildfires in the American west, and the list goes on and on… The realization that the Earth is not going to wait for us to acknowledge that it is dying seems too heavy a burden to bear. So much tragedy has been visited upon our global neighbors and so many lives have been lost already as a result of environmental degradation.  I am ashamed to admit that sometimes I even wonder if the human race is just meant to go extinct… Is all this work really worth it? I find myself secretly wondering.

For Sölle, this paralysis is a demon. It is a demon that wants us to feel incapacitated, to feel like we are too small and too insignificant to do anything. The demon wants us to throw our arms up in defeat. The demon offers an escape from our anxiety caused by problems the size of our planet: those of us who are privileged enough can choose to shut down, put on our eye masks and ear buds, and go to bed. (For now, anyway.)

But do we really want a demon to run our lives? Do we want demons to influence our news sources such that they reflect our inability to even speak about the fact that our planet is dying? Doesn’t this just feed the “machine of death” – this market logic that tells us that we are no longer humans, but consumers, and that our international relations must be based not on ending hunger  but on pre-emptive military strikes and arms build-up?

In response to fear of fear, Sölle reflects on the story of the epileptic boy in Mark 9:14-29, interpreting the story as one of casting out the demon of powerlessness. She zeroes in on the moment when the father, in light of a seemingly hopeless situation, screams, “I do have faith. Help the little faith I do have!” According to this lens, the locus of truth lies in the father’s crying out for his son’s life.  Here we see a father overcome by fear but unwilling to allow it to paralyze him. His cry seems to knock the rest of the story into completion, jarring Jesus into willingness to treat the boy.

After highlighting the power behind the father’s cry, Sölle turns to Jesus’ words, “Everything is possible for anyone who has faith.” What does this mean in the context of our dying planet? For Sölle adult faith means moving beyond the childhood idea of faith as trust in God. Faith, to her, means harnessing the power that resides in identifying as imago dei, and taking responsibility for our status as co-creators with God. And it means struggle for resistance against the machine of death.

More specifically, it means we must follow Jesus’ model of calling the demon by its name and analyzing how it is that we find ourselves in this moment of history. It means questioning the ideological world that we live in as consumers in a global market. It means connecting the dots between extreme capitalism, the slavocracy that it was built upon, and the racist, elitist, sexist, homophobic, xenophobic, extractivist structures that crank the wheels of the death machine. It means forming small work groups and planning actions, calling our representatives, and forming alliances with other groups. It means, for those of us who are white, to become aware of how our histories and peoples in particular have benefited from the same structures that are wreaking havoc on our world’s most vulnerable populations, and on our non-human relatives. And it means imagining a completely new social and economic paradigm beyond the one we find ourselves crumbling beneath today.

It means crying out when we feel hopeless, instead of going to bed and closing the blinds.

Need a little motivation? Here are three ideas to inspire you to cry out, to have faith, and to struggle against the machine of death…