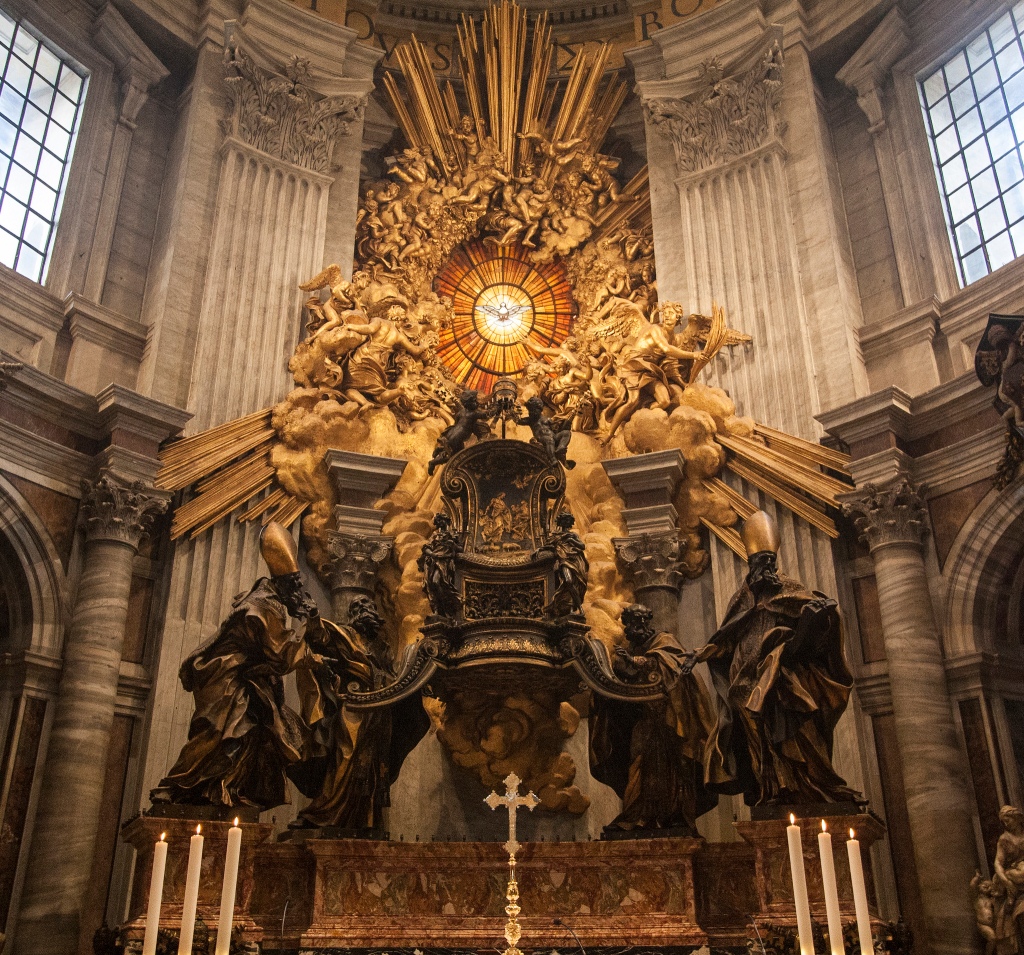 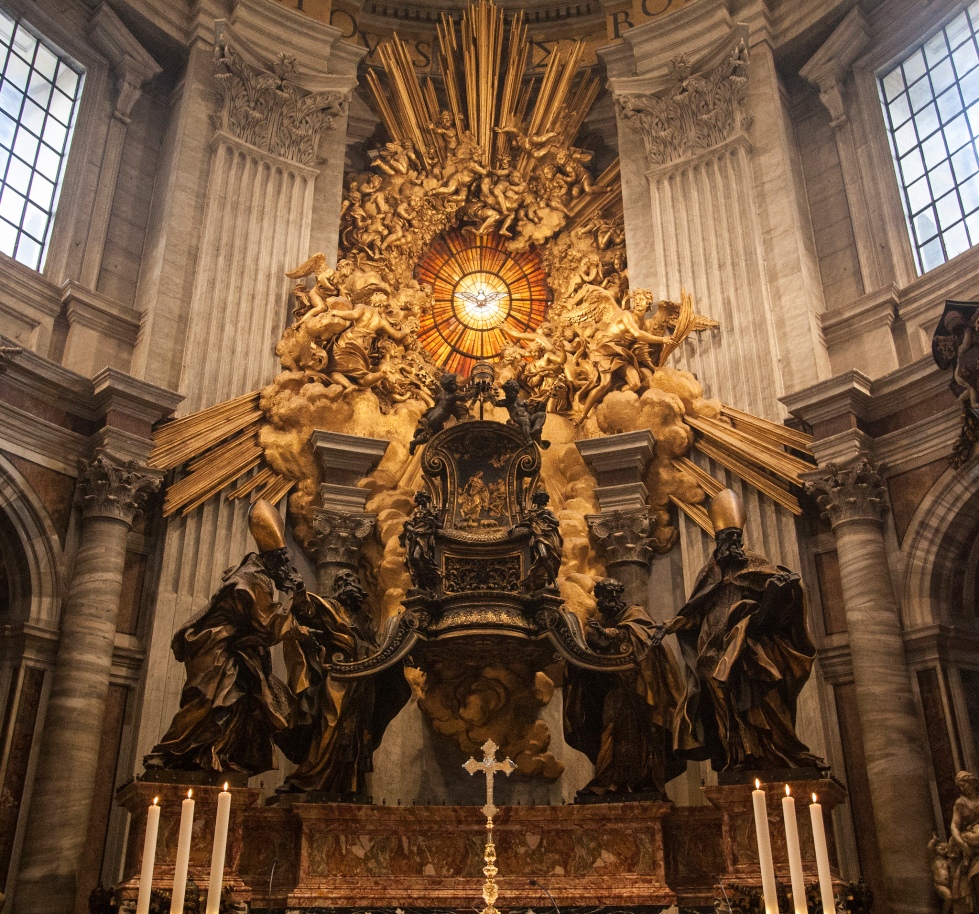 There’s no way around the fact that to many people, Catholic or not, today is a strange feast – the Feast of the Chair of St. Peter. It’s one of the few universal commemorations of the church (five, by my count)*  that seem to celebrate not a person or an event but a thing, and a piece of furniture at that. After all, we don’t celebrate the Feast of the Writing Desk of St. Catherine of Siena, or the Feast of the Comfortable But Not Too Comfortable Barcalounger of St. John XXIII.

In seriousness, however, one can distinguish today’s commemoration from the Feast of SS. Peter and Paul on June 29 (and on the older calendar, the Feast of St. Peter in Chains on August 1) as honoring not only or even primarily Peter’s personal journey and holiness but his significance to the further history of the church then and now. In ancient tradition at Rome, Peter and Paul were always honored together on June 29, as are their basilicas on November 18. As any visitor to Rome can report, one finds images or statues of Peter and Paul guarding the doors of most major churches, whatever their names, as the joint apostolic foundation upon which the church at Rome was founded. Looking at the feasts that distinguish these two saints helps us understand not just who Peter and Paul were, but what gifts they gave to the early church.

Paul’s personal celebration on January 25 is the Feast of the Conversion of Saint Paul, the commemoration of the moment when he encountered the Risen Lord who commissioned him as an apostle. Paul’s story is of the former persecutor of Jewish Christians who, knocked off his horse (not really) on the road to Damascus, is struck blind by the experience, regains his sight, and proceeds to join the vanguard of the early Christian community as the apostle of the Gentiles. Paul gets a story worthy of a graphic novel or a Scorsese film; Peter gets a chair, which seems like a rip-off.

But if Paul’s example for the church and its leaders shows a model of passionate, prophetic, sometimes argumentative speech on Christ’s behalf (an example more necessary than ever as the church defends its members from those who would seek to divide the body of Christ), the Chair of Peter serves as a symbol of the authority to oversee and guard the unity of the church through teaching and governance, through faith and power. The most traditional way of understanding this feast, then, would be to see it simply as a celebration of the cathedra of the popes and of papal authority, in the way that Bernini’s majestic Altar of the Chair at St. Peter’s physically elevates the Chair as the sure compass point of truth in a chaotic, windswept Baroque world.

As a Catholic theologian, I have deep awareness of the importance of Petrine ministry, and share in my church’s teaching on the authority of the pope. And yet a celebration of the Chair of Saint Peter that limited this symbol’s significance to the popes alone would be unworthy of the Feast. If the chair, like all episcopal cathedrae, is a symbol of teaching and governing authority, then who gets to sit in Peter’s chair? The bishops of Rome, yes – but also we, the Christian faithful whatever our vocation or ministry, who often participate in some way in Peter’s authority.

The lectionary readings for today give us some sense of the gifts of Peter to the popes, to the bishops, to the clergy, and to all of the faithful, regarding faith and power.

Regarding faith: The reading from the Gospel of Matthew is the scene of Peter’s confession of Jesus as the Christ in Matthew 16, with the famous words “You are Peter, and on this rock I will build my Church,” written in 6-foot high letters along the ceiling of St. Peter’s Basilica. Thousands of pages of ink have been spilled regarding what this pericope means, and whether the rock is Peter himself or his faith or both/neither. But without having to take a position on that debate, one can see in Peter’s faith in Jesus the model for Christian authority – an other-directed view of authority, subordinate to that of Christ, his Father, and the Holy Spirit, that always points us to faith in Jesus as the key to the keys.

Regarding power: While the Matthew 16 reading might be more famous, the lectionary also gives us 1 Peter 5:1-4, with instructions from the author to “the presbyters among you.” And, while our ecclesial presbyters can surely benefit from these words, one can easily argue that many of us end up being elders in some ways, sharing or benefiting from power, or otherwise exercising authority. This is how 1 Peter outlines its theory of leadership: “Tend the flock of God in your midst, overseeing not by constraint but willingly, as God would have it, not for shameful profit but eagerly. Do not lord it over those assigned to you, but be examples to the flock.” Such a model of power was countercultural before our current U.S. administration, and remains so. But to limit the need to consider how to exercise authority either to our most powerful leaders, or only to those most officially with a ministry of oversight in our church, would be to limit the example of Peter and the significance of this feast’s different understanding of power – the power of service, the power of tending a flock rather than ruling a roost, the power of providing an example.

Whether popes, parents, or professors, many of us exercise power in our churches (domestic, local, universal) in a variety of ways, and almost all of us are located in structures of power regularly. The Feast of the Chair of St. Peter doesn’t get us off the hook of addressing these structures, particularly if the chairs we occupy are balanced on the backs of our fellow sisters and brothers. But one message of the feast, if we see it not as a celebration of “their chair” but of “our chair,” a chair based upon the rock of faith in Christ that bears fruit in equitable, responsible, and merciful exercise of our power, then we might be able to celebrate well as being more than the apotheosis of a piece of furniture.