How do you celebrate Christmas when hope feels impossible? At the end of a year filled with fear and increasing violence, it can seem difficult to look forward to 2017 with enthusiasm. For many among marginalized groups in the United States in particular, this year was a brutal reminder of how deeply rooted their fellow citizens’ lack of empathy for them is, and many are justifiably concerned for their basic safety and well-being, which are anything but secure.

And yet: Christmas trees fill the streets, holiday standards serenade us as we stand in line at the pharmacy, nativity scenes show up outside our churches. For some, it is a welcome reprieve. The colors, the sounds, the smells of the season convey a joy that doesn’t seem to be earned by the state of our world or our country. Is it a betrayal to celebrate? Does it mean that we have to put out of our minds all the images of bloodied bodies, sobbing refugees, crammed detention centers, grieving family members of men and women killed by police? Does it mean we have to forget our fears for the future, and pretend we have “comfort and joy” when, in fact, we have none?

If Christmas is only an escape from our hurt and horror at the state of the world, we cannot afford it. Nowhere has this message been delivered more urgently than by the organizers of the 1963 Christmas boycott, who called on families to refrain from buying gifts that year as a response to the white supremacist bombing of the 16th Street Baptist Church in Birmingham, Alabama in September of that year. In the attack, four young girls, Addie Mae Collins, Denise McNair, Carol Robertson and Cynthia Wesley, had been killed. On the same day, two young black boys, Virgil Wade and Johnny Robinson, were also shot and killed in Birmingham.

The original organizers of the boycott, a group of artists that included the writer James Baldwin, the actors Ossie Davis and Ruby Dee, and the journalist Louis Lomax, saw the deaths of the “tender six” in Birmingham to be a reflection of the unconscionable negligence of the American people. In The Illustrated News in November 1963, the organizers made their case:

Thousands of atrocities committed against humanity and the Negro people from slavery to the present time, have gone unpunished. And now we are mocking the Prince of Peace; throwing bombs in the Holy Place of God; blasting the brains of His children against the high walls of His Tabernacle in Birmingham; turning His day of days into a sabbath ritual of blood and destruction. We are guilty. Not only those who planted the bomb, but those who condone injustice and segregation and thereby give it sanction; those who profit from it and those who do not work to eradicate it.[1]

Rather than giving gifts, the organizers urged families to “give to the organizations and institutions working to build and strengthen the moral and religious fibre of our nation”—the civil rights movement—instead.

Baldwin advocated for a Christmas boycott as early as the week after the bombing in a radio interview. “I think that one should tell one’s children,” he insisted, “that there will be no Santa Claus this year, because your brothers and sisters—I mean this no matter what color you are—your co-citizens, were murdered in Sunday School.” As the group wrote, children should be told that “Santa will not come this year because he is mourning for the children of Birmingham, who will get no gifts this year or the next year or the next.”

The boycott was a recognition that racism is a dire threat to the heart of Christianity. At 16th Street Baptist Church, the bombing had shattered the face of Christ in a stained glass window of the Good Shepherd, while the rest of the window remained intact. Commenting on this, Baldwin noted that that “alabaster” face that had been destroyed in the attack, the white face of a white Christ, represented the religion that had “victimized” his people for so long. “If Christ has no face,” he suggested, “then perhaps it is time that we… give him a new face… and make the whole ideal, the whole hope of Christian love a reality.”[2] 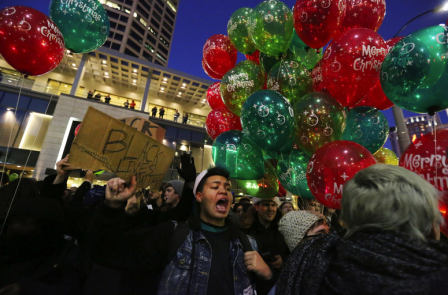 The “comfort and joy” of Christmas should not come from setting aside our mourning, our pain, and our outrage, but by recognizing that it is to the mournful, pained, and outraged world that God sends tidings of goodwill and peace. Such was the message of Martin Luther King, Jr.’s 1967 Christmas sermon at Ebenezer Baptist Church. In order to explain the Christmas proclamation of peace (Luke 2:14), he did not turn, as one might expect, to the full text from the gospel of Luke describing Jesus’ birth. Rather, he reminded his hearers of Jesus’ suffering, and his unconquerable love.

Christmas, he insisted, cannot be understood without reference to Jesus’ death and resurrection. “Men love darkness rather than the light, and they crucified him, and there on Good Friday on the cross it was still dark, but then Easter came, and Easter is an eternal reminder of the fact that the truth-crushed earth will rise again.” The declaration of “peace on earth” is grounded in this confession, in the deep trust that those who suffer innocently share “cosmic companionship”—with God, and with all life—and that despite the selfishness and cruelty we see so often in ourselves and others, the hidden victory of love has already been shown to be the final meaning of the universe.

King acknowledged that the universe itself doesn’t give much evidence for this. Can we honestly claim that “the truth-crushed earth will rise again” based on what we see? He admitted: it is not easy to believe. He recalled the 16th Street Baptist Church bombing and how it had turned his dream “into a nightmare.” He talked about visiting the ghettos of the north, where his fellow black Americans were “perishing on a lonely island of poverty in the midst of a vast ocean of material prosperity.” He related his horror as he watched the war in Vietnam unfold. “Yes, I am personally the victim of deferred dreams, of blasted hopes, but in spite of that I close today by saying I still have a dream, because… [i]f you lose hope, somehow you lose that vitality that keeps life moving, you lose that courage to be, that quality that helps you go on in spite of all.”[3]

But the hope he described was not just an idea that he needed in order to remain committed to his exhausting and often disappointing work in pursuit of justice. It was the result of his own prayer and obedience to God through suffering and fear. As he described in his autobiography, there had been times, particularly in the first years of his reluctant leadership of the civil rights movement, when his faith had been shaken by violence and threats. He recalled one desperate midnight prayer in 1956, after receiving a death threat, in which he had pleaded with God: “Lord, I’m down here trying to do what’s right. I think I’m right… But Lord, I must confess that I’m weak now, I’m faltering. I’m losing my courage. Now, I am afraid… I am at the end of my powers. I have nothing left. I’ve come to the point where I can’t face it alone.”

It was in this profound moment of despair that King realized he would not, after all, have to face it alone. “It seemed as though I could hear the quiet assurance of an inner voice saying: ‘Martin Luther, stand up for righteousness. Stand up for justice. Stand up for truth. And lo, I will be with you. Even until the end of the world’… I heard the voice of Jesus saying still to fight on. He promised never to leave me alone. At that moment I experienced the presence of the Divine as I had never experienced Him before… My uncertainty disappeared. I was ready to face anything.”[4]

The joy of Christmas, even in its least religiously explicit expressions—lights, colors, spices, warmth—has its most fundamental meaning in this unshakeable realization. “The light shines in the darkness, and the darkness has not overcome it” (John 1:5). 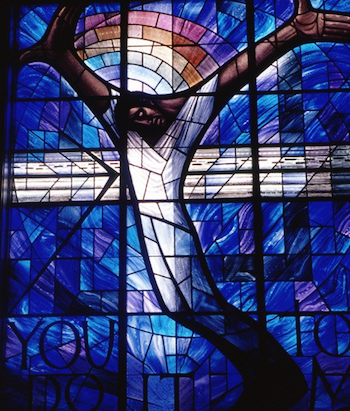 Memorial window donated by the people of Wales to the 16th Street Baptist Church after the bombing.

How do you celebrate Christmas when hope feels impossible? But that is exactly what Christmas is. Honoring the birth of Christ cannot mean escaping from the inconvenient reminders of the world’s violence and cruelty, but rather, as King did that night, it is an opportunity to lay bare our despair, our horror, our fear, and—believing that broken hearts are exactly where God takes flesh—open ourselves to joy we couldn’t summon on our own.

This means, now more than ever, giving concrete expression to our belief in “cosmic companionship” by supporting movements that work against injustice or racism in any form. But it also means allowing ourselves to hear the words of the carols we sing—a thrill of hope, the weary world rejoices, for yonder breaks a new and glorious morn—and letting ourselves see the brightness of lights strewn on a tree that knows how to survive the winter.

Hope is not an illusion; it is what reveals the truth about who we really are. We were not made for murder and brutality. We were not made to lie. We were made for the reckless, consuming, astonishing and excessive love we see both in the manger and on the cross. This year, truth was crushed. But the truth-crushed earth will rise again.

Marjorie Corbman is a PhD student in Systematic Theology at Fordham University in New York. Her research focuses on the challenge of Black Power and the Black Muslim movement to Christian theology.

[2] “The Meaning of the Birmingham Tragedy,” interview of James Baldwin and Reinhold Niebuhr by Thomas Kilgore. The full audio interview between Baldwin and Reinhold Niebuhr can be found online posted by On Being Studios on Soundcloud. Accessed December 20, 2016. < https://soundcloud.com/onbeing/reinhold-niebuhr-and-james-baldwin-on-the-meaning-of-the-birmingham-tragedy >