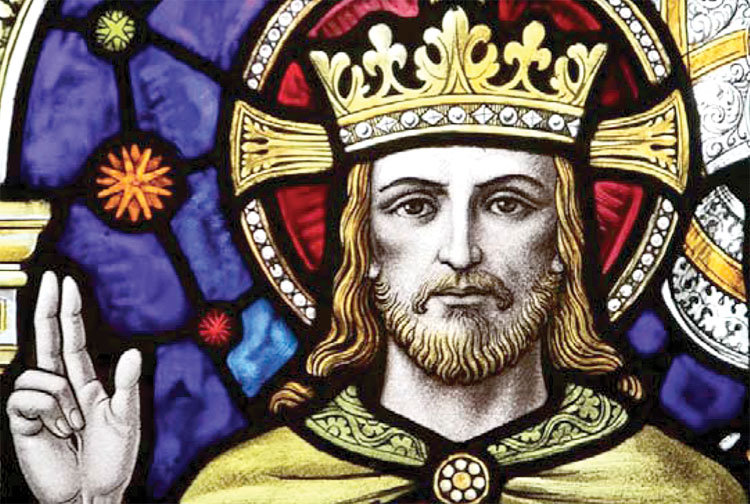 Readings for the Solemnity of Christ the King

On this Feast of the Christ the King, I do not know what to say as I continue to search for words to fully comprehend where we are today, as I run against the limitation of words to capture the gamut of emotions that our country and maybe even parts of the world are going through. And so, to be honest, it is with fear and trembling that I offer these humble reflections – as I think about what Jesus Christ as King and his message of the Kingdom of God have to say to our current situation and climate in the country.

Delores Williams tells us that “the image of Jesus on the cross is the image of human sin in its most desecrated form.” She says, “this execution destroyed the body, but not before it mocked and defiled the Jewish man Jesus by publicly exposing his nakedness and private parts, by mocking his ministerial vision as they labeled him king of the Jews.” This is what we heard from the Gospel today: how rulers “sneered at Jesus,” soldiers “jeered at him,” and one of the criminals “reviled him.” And as I turn those words over in my head, it is hard not to flashback to so many moments pre and post election – of sneering and jeering – the anger, fear and judgment of others, and almost a level of glee, for some, of how ugly and dark the elections became. The level of vitriol and outright hatred, – what Pope Francis has named the “epidemic of animosity and violence” – many observed, was unprecedented.

What was revealed to us is this divided America — in Williams’ words, an image of human sin where sneering and jeering and revilement of the “other” have come out of the shadows and is now the new normal. And it has desecrated and devastated so many who felt mocked, defiled, exposed.

There were many moments when women, minorities, vulnerable communities – were brought back to painful memories – both personal and historical – as if we lived in a different time, as if all we have accomplished as a country was being pushed back. For many, this was not the America they knew or believed in. And yet here we are…contending with this America.

But maybe, this is not just in America. Maybe, we are living in unprecedented times – for what is happening here cannot be isolated from what else we see going on in the world: of attitudes and movements that tend toward isolationism, fear and the appearance of “strong men” who are meant to save us all. For me, I think of this in terms of my country, the Philippines where our current President enjoys very high satisfaction ratings, is seen as someone who has a strong political will, but that will has resulted in the deaths of at least 3,000 people as he entered office in June. In the midst of the “strong men” that are appearing as world leaders, here today – we are asked to gaze and remember Jesus, to meditate on this image of the “savior” – the apparently “not so strong man” who “saved others but could not save himself.” – the one who inverts and subverts the definitions of strength and power and makes us ask, Who/what is strength for? Who/what is power for?

And as I continue to gaze at the cross, I look at the wounds inflicted on Jesus that reveal that maybe underneath the sneering and the jeering there are deeper wounds carried by many and these un-addressed, undressed wounds have led to our brokenness today. And so I think of the wounds of those who feel left behind by globalization, who feel that they cannot keep up with this increasingly diverse and technological world in which they seem to have no place, of a world that is becoming strange to them and where they are becoming strangers. And as I gaze at that cross, I think about the silence, the patience, and the compassion it takes to listen beyond the “anger” and to acknowledge the anguish underneath it.

But beyond that, I also gaze at the cross as a symbol of resistance, of resisting attitudes, words, and actions of exclusion, cruelty and even hatred toward the other – attitudes and actions that have left us divided, that have “dis-membered us.” And so we cry, Jesus, remember me, when you come into your kingdom.

To continue to gaze at the cross is to remember the “ministerial vision” which led to the cross, a vision of that Kingdom of God, that Williams describes as “a metaphor of hope God gives those attempting to right the relations between self and self, between self and others, between self and God as prescribed in the sermon on the mount, in the golden rule and in the commandment to show love above all else.”

To show love above all else…How do we do that in the concrete, how do we “right our relations” in the midst of so much anger and hatred? Once again, we look at Jesus and the life he led, and his message of a kingdom where everyone is invited but where Jesus actively gathered the least in society, and treated them with tenderness and compassion. In our first reading, we are offered the image of God not simply as a commander but as a Shepherd, and in another set of readings, Ezekiel describes the work of the Shepherd not simply seeking the lost and bringing back the strayed, but binding up the injured, and strengthening the weak” (Ezekiel 34:16).

And so today, we are called to bind those injured by this epidemic of animosity and violence, to strengthen those weakened by threats to their lives and livelihood and families and communities and now live with constant anxiety, uncertainty and fear.

For many of us who are in situated in colleges and universities, how do we act as shepherds, creating spaces so that we can listen and support those who feel vulnerable in our midst? How do we use our roles, our positions of authority and leadership – as teachers, administrators, mentors, scholars – to speak to the uncertainty of this time and send a clear message of solidarity to those who feel even more marginalized? For me, personally, it has been hard to teach as if we’re “back to normal” when students tell me of their anxiety in an atmosphere where some contemplate suicide. How do we create communities that can resist the division, fear and hatred that leave so many lost, wounded and weak?

In the preface to our Eucharistic prayers today, we hear that the kingdom of God is a kingdom of truth and life, of holiness and grace, and a kingdom of justice, love and peace. And so first, we must speak the truth. And as Cornell West says, “a condition of truth is to allow suffering to speak” – all kinds of suffering. We can not dismiss any of it. This may include acknowledging our own suffering; that we, too, are scared, anxious, despairing; that we, too, are vulnerable.

But there are moments when we see this suffering addressed, when it is not just witnessed but responded to…

In those moments (fragile as they may be) we recognize holiness and grace.

And in the end, we must constantly summon the courage to choose justice, love and peace above all else even in the midst of our own fears and anxieties. And maybe this is where we cry, “Jesus, remember me, remember us…”

And as we gaze on the cross and utter these words, maybe our loving response emerges not just from the depths of compassion and the strength of our conviction but also out of our disappointment and despair. Despite our own fear and trembling, we stand together and inspire each other; we call forth and see “the more,” the “better” in each of us. And maybe this is where we experience a glimpse of that Kingdom: a kingdom where wounds (ours and others) are dressed, where the weak are made strong or we realize that we are stronger, more resilient than we thought; a kingdom where we are re-membered – put back together – and no one is forgotten. This is the kingdom where Christ is our King.