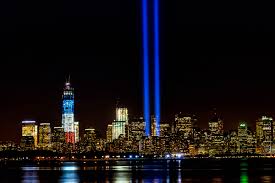 Everyone of a certain age has a memory, a story, a narrative, a “where were you?” of that life-changing, history-altering day.  Here is mine, offered with humility.

It was a beautiful, blue-skied, unusually cool early Fall morning in Milwaukee today, similar to that beautiful, blue-skied, unusually cool early Fall morning 15-years-ago in New York City.  A little before 8:30 this morning, I was on the bus on my way to church, a half a country away from NYC which, until last month, I’d called home for the last eight years, and half a country and a world of experience away from my college dorm room where I was watching cartoons and grumbling about an 8:45am class in Mobile, AL, blissfully unware of the mass destruction occurring on the East Coast.

An hour time zone behind NYC, by the time I heard anything, most everything had already happened.  I was walking across campus, and I overheard another student talking to her friend: “They’re bombing the Pentagon.”  Her words sounded ominous, but still, I wasn’t overly concerned.  I grew up in a world of terrorists, both foreign and home grown.  The first World Trade Center bombing.  The Oklahoma City bombing.  It’s not that these weren’t horrific tragedies, and it’s not that the loss of life was any less devastating, but these attacks were different somehow.  It wasn’t until I got to my classroom, where the professor had the TV on, that the full extent of what had happened began to set in.  These weren’t truck bombs.  These were planes, intentionally used as weapons to cause mass destruction and loss of life.  For some reason, I can’t remember if we had class that morning, or if the professor let us go.  But I do remember spending the next hours glued to my tiny dorm room TV, my roommate and I huddled together on our pink futon, like the rest of the country, at a complete loss for words.

Fifteen years later, I still find it hard to find words to describe the events of 9/11, the senseless loss of life, the strength and love of those who lost those dearest to them on that day, the seemingly unending wars in the Middle East that also have caused mass destruction and loss of life and that continue to inspire terrorists across the globe, conflicting feelings about forgiveness in the face of evil.  But I do know that this is not the world God wants – a world of violence and hatred and division.  People remember the picture perfect blue sky of that morning because it was beautiful, the type of sky that makes you stop and look up.  For me, these instances of beauty are signs of God’s goodness and love for God’s creation.  The planes exploding into the Twin Towers marred this beauty.  The decades long violence in the Middle East mar this beauty.  So I pray, much as I did fifteen years ago when I couldn’t find adequate words.  I pray for the lives lost.  I pray for the loved ones left behind.  But mostly I pray for peace, for the rest of us left behind to navigate the post 9/11 world to live with a courage that transcends difference and hatred, a courage the works passionately for a justice that will bring peace.

“If you want peace, work for justice.” – Pope Paul VI