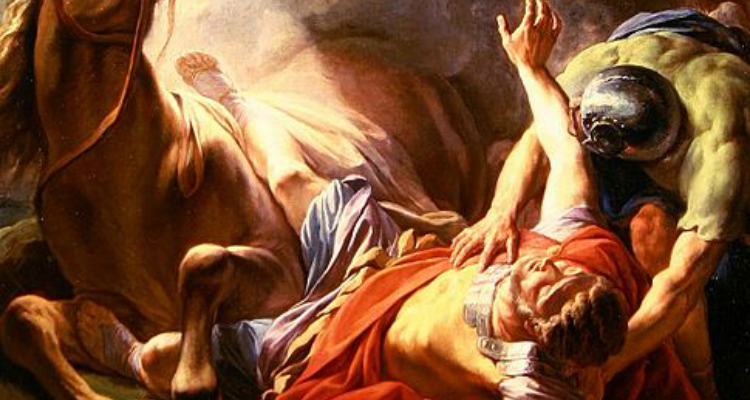 For this installation of Daily Theology’s Vacation Bible School, I have the privilege of wading through Paul’s letters with you.  Actually, it will be just one of Paul’s letters (1 Corinthians, which gives us more than enough fodder), and when I say “wading through,” I do actually mean what that image suggests: working with 1 Corinthians is, for me, a lot like slogging doggedly through a swampy mire, swatting mosquitos and tripping over obstacles I see and yet somehow cannot avoid.

I have problems with Paul.  I have for a long time.  It’s not just his bombast or the tone of many of his letters (much of his voice sounds to me like it drips false humility, or it just skips humility altogether—1 Cor 9:19-23 and 15:9-10 are apt examples).  It’s also many of the not-necessarily-religious norms he tends to enshrine within the rest of his letters.  The necessity of veils for women (1 Cor 11:2-16), the prohibition against women speaking in church (1 Cor 14:35), and the preference for celibacy over marriage (1 Cor 7) irk me more than a little, for example.  I am hardly unique in these issues with our Tarsian friend, but nevertheless his writings made their way into the canon, and for all the issues I have, God still speaks truth through them.

1 Corinthians is particularly relevant in the current season in the United States, marching as we are toward the November election.  Paul writes his first letter to the church at Corinth because Christians had divided themselves from each other, and it was causing a host of problems.  Dale Martin goes into great depth on the situation in Corinth (and Paul’s responses) in his book The Corinthian Body (New Haven: Yale University, 1999), but to make a very long story short, Christians in Corinth found themselves in contentious factions, and Paul’s admonishment was basically “Knock it off—Christians make up one body, with the mind of Christ.”

This is a fantastic insight for Christians in the United States this year, but unfortunately this has both an easy and a difficult application, and as one might expect from Paul and the gospel, Christianity largely requires the more difficult one.

The easy application goes something like this: yes, Christians in the U.S. find themselves on all sides of the political divides, so let us all just consult our consciences and vote as the gospel enlightens us.  Quick, neat, and best of all, no need for messy, uncomfortable argument.  This is the theological visage of agreeing to disagree.

In practice however, this doesn’t actually get us anywhere or change anything.  Voting (and living) the gospel is not a matter of retreating into oneself and avoiding the challenge of interacting with the differing faith-lives of others.  As Paul shows us in 1 Corinthians, it’s about doing the work of living as Christ’s body, which is rarely as idyllic as it might sound.  It’s not by accident that Paul spends the first three chapters of 1 Corinthians emphasizing that we all “belong to Christ, and Christ belongs to God” (1 Cor 3:23), and then the remaining 13 chapters explaining what that means and looks like.  He tells us it looks like avoiding immorality and litigiousness (1 Cor 4).  It looks like attending to how one’s actions might affect the faith of others (1 Cor 8 and 10:23-33).  It looks like celebrating the Lord’s Supper with equality, and recognizing the various gifts of the community (1 Cor 11-14).  Voting (and living) the gospel means working to build up the body of Christ, and that’s a messy business that goes far beyond “agreeing to disagree.”

Unfortunately, as difficult as this might be, there remains the problem of those pesky, antiquated norms Paul puts in alongside everything I just mentioned.  How can we pick and choose among his writings?  Can I legitimately say yes to Paul on avoiding immorality and litigiousness, but dismiss his pronouncement that women must wear veils and be silent, or that marriage is lesser than celibacy?

I don’t have a perfect answer, but this is where I’ve ended up: Paul, in addition to being an author, is a conversation partner.  He is one of the many saints in my life.  That means I’ll pray with him, I’ll learn with him, and I’ll also disagree with him, and may God give me wisdom.  One might ask, when push comes to shove, whether I’ll pick and choose what I take from Paul.  My answer is this: in the body of Christ, we don’t come to pushing and shoving.  We struggle together with the same gospel, however and in whatever words it comes to us.  I happen to think that loving God and neighbor has more to do with works of mercy and justice than it does with wearing veils, and I think in the end Paul would agree.  Even if he wouldn’t though, we could still work together to build up the same body of Christ, because as Paul reminds me in chapters 1 and 3 of his letter to the Corinthians, I was not baptized into Paul; I belong to Christ.