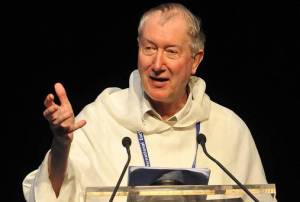 Season 2 of the podcast continues with a conversation with Timothy Radcliffe, OP! Fr. Radcliffe was in Chicago to give the Kennedy Lecture at Dominican University, where our own Dannis Matteson and John DeCostanza had an opportunity to speak with him. In their conversation, they talk about the young Timothy Radcliffe’s bad boy days, the importance of friendship for vocation, and hope in the midst of suffering.

Fr. Timothy Radcliffe, OP is a Dominican friar, a Catholic priest, and a biblical scholar. He was the Master of the Order of Preachers from 1992 to 2001. Since 2014, he has served as the director of the Las Casas Institute at Blackfriars, Oxford, which “examines issues concerned with human dignity in the light of Catholic Social teaching.” In 2015, Pope Francis named him a consultor to the Pontifical Council for Justice and Peace. He is the author of several books, including Seven Last Words (Burns & Oates, 2005), Why Go to Church? The Drama of the Eucharist (Bloomsbury, 2009), and Stations of the Cross (Liturgical Press, 2014). His 2005 book What is the Point of Being a Christian? (Burns & Oates) won the Michael Ramsey Prize.