The Catholic Common Ground Initiative (CCGI), founded by the late Cardinal Bernardin, is a nation-wide project committed to facing difficult issues in the Church which create derision and polarization, lifting these issues up for dialogue. At our annual Murnion Lecture in June, Fr. Bryan Massingale challenged us to go beyond dialogue in his lecture Is Common Ground Possible in Pursuit of Racial Justice? The challenge gave us pause as an audience, especially for the CCGI Advisory Committee. How should CCGI, an initiative dedicated to dialogue, respond when confronted by this challenge? 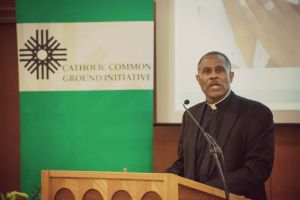 Fr. Bryan Massingale of Marquette University exposed the crisis of racism in our country and Church during his lecture on June 26th, 2015. He did this with a striking and painful litany of the African Americans who have died as a result of police violence. The long list of victims, Fr. Massingale explained, is a tragic sign of the times that the civil rights movement remains unfinished.

Why does racism persist? Fr. Massingale synthesized four points that explain how racism continues to be perpetuated in the United States. First, he explained, there has never been a serious commitment to racial equality in our country. His second and third points emphasized the serious problem of white ambivalence and the lack of willingness to “pop the white bubble.”  The fourth reason was psychological: sympathy can be racially selective.

Given racism’s continued persistence and the reasons it still grips our society, Fr. Massingale outlined the Catholic Church’s response to racism, critiquing it as inadequate. Fr. Massingale elaborated that the Catholic approach to racism focuses too much on individual acts of malice instead of seeing racism as a communal ill. It responds to racism by promoting dialogue and education, but, it does not extend beyond dialogue and education to foster action. Further, he argued that the Church does not do enough to uphold African American agency and leadership, and, it still identifies itself as a white institution.

Dr. Martin Luther King’s approach to racism stands in stark contrast to that of the Church’s, as Fr. Massingale pointed out. Dr. King imagined a beloved community whose goal is to complete the civil rights movement and exist in genuine equality. Dr. King described racism as a soul sickness, a spiritual crisis gripping our society. The soul of America is in desperate need of redemption which must be set into motion by widespread lament and conversion.

What does this look like practically? Fr. Massingale evoked Dr. King’s wisdom that any call for social change incorporates conflict and struggle, emphasizing that, “we need to undertake practices of conflictual solidarity!” According to Fr. Massingale, for common ground to happen, we are required to move beyond dialogue and be willing to engage in active struggle.

To conclude the lecture, Fr. Massingale addressed the question within the title of his presentation: is common ground possible in the pursuit of racial justice? “I find myself caught between tense hope and realistic despair,” he told the audience. He shared that he finds himself troubled by questions that ask whether the Church can be something different, or, if it even wants to be. The grave reality of racism leaves many, including Fr. Massingale, with a sort of “blues hope” that provides a hesitant “perhaps” in answer to these questions. He ended the lecture noting that sociologically, human change is possible. “What is does not have to be…therein lies the hope and the change.”

And so, how does CCGI address the questions brought to the forefront by Fr. Massingale? How do we as an initiative face Fr. Massingale’s challenge to “go beyond dialogue” and enter the struggle? Perhaps some history around CCGI and racial justice might help us to find a way forward.

CCGI has a history of contending with the reality of racism within the Church. An example of this can be found in Called To Be Catholic, one CCGI’s founding documents which describes a list of urgent questions “that the church in the United States knows it must air openly and honestly but which it increasingly feels pressed to evade, or at best, address obliquely.” This critical list includes mention of African American communities and the Church’s need to embrace African American cultural and social concerns.

Joseph Cardinal Bernardin, former Chicago Archbishop and founder of CCGI, has also made strong statements challenging the Church to face racism. Here are some excerpts from his writing that address racism:

“To follow the Lord, we must love all those whom he loves. There is no other way…Racism is thus an attack on Christianity at its roots. …This is not the way of Jesus and the community of friendship with God which he founded.” (1)

“…racism is a terrible evil. It’s a sin! It is extremely destructive… As a society, but especially as a Christian community, we have an obligation to do everything in our power, first to condemn it, but that’s negative. Positively, we must do all that we can to bring people together.” (2)

“But in this [Chicago] metropolitan area there is a low-key, chronic racism that manifests itself every day in the usual ways: inadequate housing, jobs, healthcare, and education, as well as certain distance between people of different ethnic and racial backgrounds. This form of racism has been described…as ‘the quite riots’ gripping our society today…We often assume that the silent wounds of chronic racism are incurable conditions of contemporary life. So, we try to live with the ‘quiet riots.’ However, upon further reflection, even the perennially optimistic person recognizes that such silent racism is a problem waiting to turn into a deafening crisis. To put it bluntly, there will be no end to acute racial crises until we attend to the chronic problems of racism and cultural misunderstandings in Chicago…” (3)

In light of CCGI’s rich collection of resources that deal with racism, how might we respond to Fr. Massingale’s challenge to take racial justice concerns beyond dialogue? Perhaps our first step in embracing the challenge—as an initiative and as a Church—is to finally make racial justice a priority. How can we move beyond dialogue when an honest examination shows that we rarely talk about about racism?

The urgent challenge to move beyond dialogue is an uncomfortable one. This call pushes us to ask ourselves how serious we are about equality. It snaps us into reality and hopefully prompts us to ask ourselves “where do we start?!” Bishop Braxton, in his Pastoral Letter, The Racial Divide in the United States, spells out concrete steps toward both dialogue and action. This letter is a prime example of where we might start. Let us do the dialogue, so that we can move beyond it towards active struggle for real racial equality.

This article was printed in the Catholic Common Ground Initiative Report, Fall 2015