(Editor’s Note: This post is the first of a series of three reflections on the 10-Year Anniversary of Hurricane Katrina. Be sure to check out the posts on Saturday and Sunday by Lorraine Cuddeback and John DeCostanza.)

On August 28, 2005, exactly ten years ago today, I was not in New Orleans.  I was 8 hours away, living safely in San Antonio, TX, watching the preparations on TV and talking to my family, already on the evacuation route from New Orleans to a city called Shreveport in northern Louisiana.   Like many, I believed this hurricane would pass New Orleans without too much damage.  There had been damage in the past, but hurricanes were a part of life growing up 2 miles from Lake Pontchartrain.  I had an appreciation for weather, found it interesting, riveting, compelling.  I did not yet have a fear of weather. 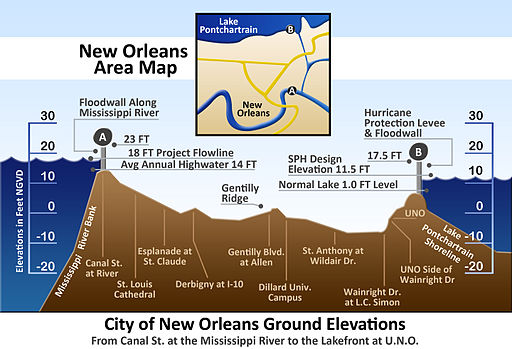 the mayor of New Orleans, Ray Nagin, is quoted: “We are facing a storm that most of us have feared…I don’t want to create panic, but I do want the citizens to understand that this is very serious, and it is of the highest nature.”  The article continues, “In worst-case scenarios, most of New Orleans would end up under 15 feet of water, without electricity, clean water
and sewage for as long as six months. Even pumping the water out could take as long as four months to get started because the massive pumps that would do the job would be underwater.”

The sheriff of a county close to New Orleans is quoted: “These levies were designed for a Category 3…You’re now looking at a Category 5. You’re looking at a storm that is as strong as [Hurricane] Camille was, but bigger than [Hurricane] Betsy was size-wise. These levies will not hold the water back. So we’re urging people to leave. You’re looking at these levies having 10 feet of water over the top of them easily.”  Again, these were written the day before the Storm.

Around five months ago, in March 2015, we lost power in South Bend, Indiana for a few days.  A bad spring thunderstorm hit: lines were down, trees were fallen, and power outages were widespread.  Our home was unlucky enough to be one of the last groups to regain power.  There were two nights where I drove back home amid a dark street–no streetlights, no houselights, no window lights.  I did not realize, until that evening, that despite not living in New Orleans at the time, despite not having lived there since, I could still be so affected by the monster that was the Storm that tore apart my city.  I slept restlessly for two days during the brief northern Indiana power outage and was more than relieved when the power came back on.  No amount of logical thinking could convince me that, unlike New Orleans, there was no Storm coming–there were no dead bodies in the floods that were sure to come; no houses would be washed away by 30-foot surges from the Gulf of Mexico.

So, five months ago, I cursed the storm that affected me so, and I cursed my fragile brain that took me back to those few days, ten years ago, when the place I grew up in ceased to be the same.

My current dissertation deals with the intersecting lines of philosophy, science, and theology in the Catholic Church.  I know well the history of attempts to explain natural disasters, to discover the cosmos, to describe why the natural world behaves as it does.  Does God will earthquakes, or does God permit them?  Does God create hurricanes, or are hurricanes merely a morally-neutral byproduct of the natural world?

There is no good answer to this question, not in my book.  Oh, there are grand philosophical arguments you could read until your eyes fell out, but they don’t discuss the fragility of human mind. They talk of pain and destruction in theory, or in abstract historical references.  But to delve too deep into metaphysical philosophy when discussing something so personal as human loss is to potentially lose perspective on the importance of God in the world.  Perhaps because of my submersion in these philosophical arguments surrounding science and faith over the last few years, my theology has become a matter of persons.  Oh, ideas are there of course.  But ideas are for persons, not the other way around. And I’m still not convinced anyone is served well by the theory that God “permits but does not cause” the natural disasters that take so many human lives each year.

I could be wrong, of course, but I know too many agnostics and atheists in the fields of science studies to think that this philosophical stance is anything but a tricky placeholder for a much simpler theological answer: “Here are some possibilities, but I really don’t know !”

On the via positiva side of things, my studies have led me to a different way to approach traumatic events and the delicate nature of the human brain which teaches a similar lesson in humility to the answer above.  The exponential progress in technological sciences over the past few century can teach many lessons, but one of the most important is a reminder of what humans are and what we are not.  We may very well be the most intelligent life forms in the universe (maybe), but we are definitely not biologically perfect creations.

Brains, for example, are fragile and easily wounded.  Memories come and go, sometimes with disease, sometimes with trauma.  We create computers to do heavy mathematical lifting that we could never do alone.  We create giant machines to do giant analyses, and we stand often too proudly with their accomplishments in hand.  Yes, humans can do and will do many amazing things, but the theological belief is clearly that we are made “in the image of God” and not that we were made “to be Thor.”

To those who see devastation and claim atheism or agnosticism, my argument is a similar one: how can such a claim be made by minds as fragile as our own?  To know that we are not–and we will never be–as intelligent, as reasonable, or as emotionally aware as we might be should give us a healthy dose of humility in any attempts to discover the mind of God in a macro-level analysis of suffering.

God is not found in the big picture–God is found in persons.  Faith lived in the abstract is not faith but the concept of faith.

I don’t really like talking about the Storm or my reactions to it.  It is far easier to discuss theological approaches to tragedy–no matter how personal they might be–than it is to discuss the tragedy itself.  I still don’t really know what to do with the all the ideas and thoughts surrounding this tragedy in my mind–I still can’t believe it really happened, despite how many times I’ve visited the city since.  It takes a certain commitment to the apophatic–the unknowing–nature of theology to see God through a lens of an imperfect mind, but I think I’m ok with that.  I like the metaphysical messiness that continues to define my theology of persons.