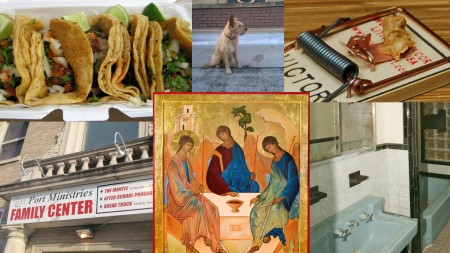 What do mouse traps, tacos, and bad plumbing have to do with the Trinity?  For my husband and me, everything. But before I divulge, let me set the stage.

From math to mutuality

Participating in the Trinity

We are also implicated in the relationship that is Trinity. It does nothing for our world to simply believe that God is Triune; one must participate in the work that the Trinity is already doing in the world (Fiddes, Participating in God).  We do this by engaging our relationship with God through engaging in our relationships with others. The word for this is orthopraxis (2).   Orthopraxis implies that our focus is no longer speaking about the triune God but rather acting out of relationship with the triune God. Orthopraxis literally means “right action.”  We are then left with the task of acting rightly by reflecting characteristics that embody hospitality, equality, mutuality and inclusion. Our charge then as trinitarian Christians is to ask ourselves: Do our lives reflect the relationship-centered Trinity? Does our church? What about our society?

When we take this ancient doctrine of the Trinity seriously, seeds take root. We are flung into a life of discipleship centered around a unique goal: building equal, hospitable relationships, attending to the wounds of those who have been slighted of relationship and forging relationship where it does not already exist. We are brought to places we never expected as we nurture these seeds that get planted by participating in the Trinity.   And this is where the mouse traps, tacos, and bad plumbing come in to play for my husband and me.

Our seed was planted back in November when Tom and I attended our first meeting as board members on the Port Ministries’ Young Professional Advisory Board. The Port Ministries is an organization that provides a variety of services to the Chicago’s notorious Back of the Yards neighborhood. Ministries of the Port include a free clinic, after school programming, GED classes, and the Bread Truck which provides meals all throughout the neighborhood. The evening of the board meeting, one of the Port’s directors, David, took us on a tour of the Port. Although we had been bringing college students to volunteer at the Port’s various services, we had never actually been inside the Port’s third largest building, which used to be an old rectory. David escorted us through many bedrooms, a kitchen, and even a small chapel. The Holy Spirit must have been must have been jumping up and down and waving at us frantically during that tour in order to get us to see beyond the dank, disheveled, dusty appearance of the house. Her song and dance worked, though. The seed took root. The moment Tom and I stepped outside, we looked at each other and smiled. Tom said to me, “Should I just tell David that we will move in there?”

It turns out, this same seed planted within Tom and me was also simultaneously being planted for a young woman, Molly, who was working as a nurse in Iowa. For the next few months, together with David and Molly, we dreamed and planned and wondered if something like this would really be a possibility: an intentional community that asks very little rent, and in return, community members would provide volunteer service to the Port. In February our plans were approved. In April, we started packing. At the beginning of May, we painted the two rooms that we would inhabit. And then, we moved in! Within the first week, we found one of Chicago’s best taco places in the back of an unassuming supermercado. Week two we had to set down mouse traps in our kitchen. Going on our third week, we have made a routine out of jumping from one bathroom where only the toilet works, to the bathroom across the hall where only the sink works.

And through all of us, we find ourselves building relationships. From the helpful man who owns the pest store on Ashland, to the family who serves Chicago’s best tacos at La Internacional Tacos Y Supermercado, to the Port’s board members who are graciously helping us fundraise to fix our plumbing. And the list goes on . . . . We walk our dog a few times a day around Cornell Square Park where we meet moms who drop their kids off at the school nearby and push their little ones on the swings. We are beginning to recognize kids who regularly play soccer on the turf in the evenings. We often hear small children shout, “Mirra! El perro!” (Admittedly, he is kind of funny looking.) In fact, our dog has even befriended a German shepherd whose young owner has agreed to meet us every Friday so the two dogs can play together.

So what do mouse traps, tacos and bad plumbing have to do with the Trinity? For us, they are signs of relationships that have begun to grow as a result of the seed that the triune God planted in our lives. This seed that called us to move into a neglected neighborhood, create a community, and grow relationships, is a result of taking the Trinity seriously.  Ultimately, our prayer is that God might create something good in a neighborhood that faces so much pain. As we “Go, therefore, and make [ourselves] disciples…” we can be assured that our triune God “is with us always” (MT 28:16-20).

Dannis Matteson has served the Catholic Common Ground Initiative since October of 2014.  She recently received her M.A. in Systematic Theology from Catholic Theological Union as a Bernardin Scholar and is excited and honored to continue the legacy of Cardinal Bernardin at CCGI.  In addition to her work at CCGI, Dannis teaches theology as an adjunct professor at Saint Xavier University in Chicago. Dannis and her husband Thomas Cook (newly named Associate Director of Spiritual Formation for Lay Students at CTU) have lived in the Hope House at the Port since the beginning of May, 2015, alongside their community member, Molly. They hope to continue to attract people who wish to serve the Back of the Yards and live out their faith in community. Dannis’ theological interests include Trinitarian theology, political theology and eco-feminist theology.  Aside from ministry, Dannis and Tom spend their time taking care of their puppy, Paulie, biking on the Chicago lakefront, and living the lifestyle of discipleship.