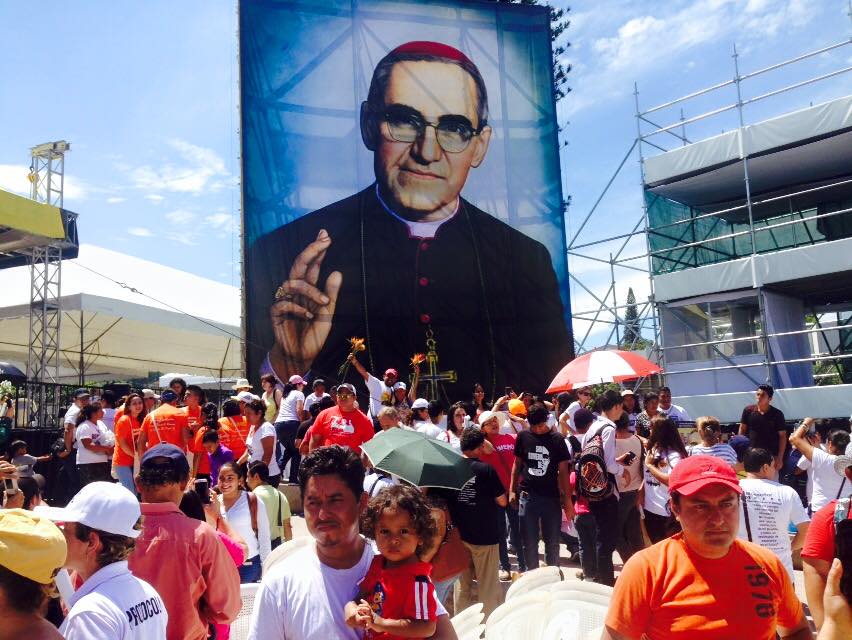 On February 13, 1977, Salvadoran Jesuit Rutilio Grande, who was a close friend of Oscar Romero, gave a sermon responding to the abduction and expulsion of Mario Bernal, a Colombian priest working in the neighboring parish to Aguilares. “I’m afraid,” proclaimed Padre Rutilio, “that if Jesus of Nazareth came back, coming down from Galilee to Judea, that is from Chalatenango to San Salvador, I daresay he would not get as far as Apopa, with his preaching and actions. They would stop him in Guazapa and jail him there … They would accuse him of being a rabble-rouser, a foreign Jew, one confusing people with strange and exotic ideas, against democracy, that is, against the minority … and they would undoubtedly crucify him again.” About a month after preaching these words at Apopa, Fr. Grande was assassinated by machine gun fire on his way to evening mass.

It is not easy to find the words to express what it was like to be in El Salvador for Oscar Romero’s beatification. In the days proceeding this momentous occasion in the history of the Church of El Salvador, I took time to reread these words from Padre Rutilio that I have inscribed in the back of my journal. This daily reflection became a part of an ongoing process for me to have the Salvadoran reality, and Romero’s beloved pueblo, guide my faith and instruct me on the radical nature of the Gospel. Romero’s own life is a testimony to the possibilities that spring from this very notion. Padre Rutilio’s sermon, and his death that resulted from the willingness to preach these words, was what led to Romero’s own metanoia to denounce injustice and violence, and to speak on behalf of the poor.

The role that Padre Rutilio Grande, and this sermon, played in Oscar Romero’s life can easily be overlooked. This is the very reason why I was amazed and inspired that the gathering song at Romero’s beatification was Vamos Todos al Banquete, a song that stems from Padre Rutilio’s sermons, and is a popularized reflection on his life.

The lyrics to this song deliver a simple and direct message – God mandates us to make this world into a table where all are welcome and where all are equal. Is this a banal platitude, or a radical statement of Christian faith and action?

The gathering song at a mass is not only meant to create an atmosphere of prayer, of worship, and of celebration, but it is also a statement of faith. Thus, the choice to make this the entrance hymn for Romero’s beatification begs the question – what is the statement of faith that the lyrics to this song make?

I think that this song allows us to reflect on the radical nature of the Gospel, and the role that Romero plays in shaping the universal Church. Romero teaches us that we can understand the mission of the universal Church more fully when we look at the particular reality of the poor. By proclaiming Blessed Romero, we also proclaim blessed are the poor, blessed are all of those who have, up until now, not had a voice in our understanding of “the universal.” This is why Romero’s beatification marks a turning point for the Church; because it calls the church to renew its commitment to be a voice for the poor, and for all of the voiceless in our broken world. Romero challenges the Church to understand its universality by asking – are we the church that aligns with the wealthy, the powerful, the status quo? Or, are we the church that is hanging between two thieves, the church on the margins, the church of those outcasted by society?

To say vamos todos al banquete is a radical statement of faith. Yet, there is a fear that these words will become meaningless and empty if they are not put into action in the lives of the faithful. An article in National Catholic Reporter said that many young people are being led away from the Church because although the Church aspires to welcome everyone, its exclusivity restricts some from being welcomed at the table. When we begin our Eucharistic celebration by exclaiming all are welcome, vamos todos al banquete, do we make these words incarnate in our actions as a communal and universal Church?

After Romero’s beatification, I went to a Celebration of the Word at Pueblo de Dios en Camino, a Christian Base Community in San Ramon, San Salvador. The friends I have made at this Christian Base Community over the years has deeply transformed my faith, they are the key actors in this ongoing desire for Romero’s beloved to guide my faith and instruct me on the radical nature of the Gospel. After the celebration I was talking with my dear friend, Hector Garcia, and together we were reflecting on the beatification. We concluded that the spirit of Romero, incarnate in the Salvadoran people, can help the universal Church understand that faith is a quest for the living God, and that the search for the living God must begin among the poor. When you encounter the compassion and love of Christ in this way, it demands to be expressed in concrete actions of faith, as Jon Sobrino would say, through political holiness. Primarily because of Rutilio Grande, Romero rejected any theology of comfort, any “theology of the desk” that does not actively engage in the life of the poor. By entering mercifully into the chaos of the poor, Romero bore witness to the vastness of God and demonstrated how the way you live your life far surpasses any abstract theological theory.

As Christians, we must live out the words vamos todos and vamos todas al banquete not because it makes us better Christians, but because it makes us Christians at all. When we stand on the margins, when we not only hear but listen to the marginalized, we unexpectedly find that the universal Church has widened, and the margins that once were, are then erased. As Fr. Greg Boyle poignantly puts it, “We locate ourselves with the poor and the powerless and the voiceless. At the edges, we join the easily despised and the readily left out. We stand with the demonized so that the demonizing will stop. We situate ourselves right next to the disposable so that the day will come when we stop throwing people away.” This is the task of the universal Church to dismantle the barriers that exclude so that together we may join in working toward the coming of the Reign of God.

Here is the question that Romero challenges the Church to ask now – who are we excluding from the banquet of the Lord, the table of creation? How can we not only include their voice, but dismantle the barriers of separation and the systematic sin that allows us to be separated from one another? My prayer is that together as a faith community, we will respond vamos todos, vamos todas.

Meg Stapleton Smith is a master’s candidate in Ethics at Yale Divinity School. After graduating from Boston College in 2013, she was Director of Campus Ministry and a Theology teacher at Notre Dame Cristo Rey High School in Lawrence, MA. Her current research interests lie mainly in Salvadoran liberation theology and contemporary Christian social ethics. In her spare time, Meg enjoys playing with her family dogs Ruby and Ty, visiting craft breweries, and reading poetry by Mary Oliver, Rumi, or Rilke. It is clear that Meg is a true believer because she is also an avid New York Mets fan.