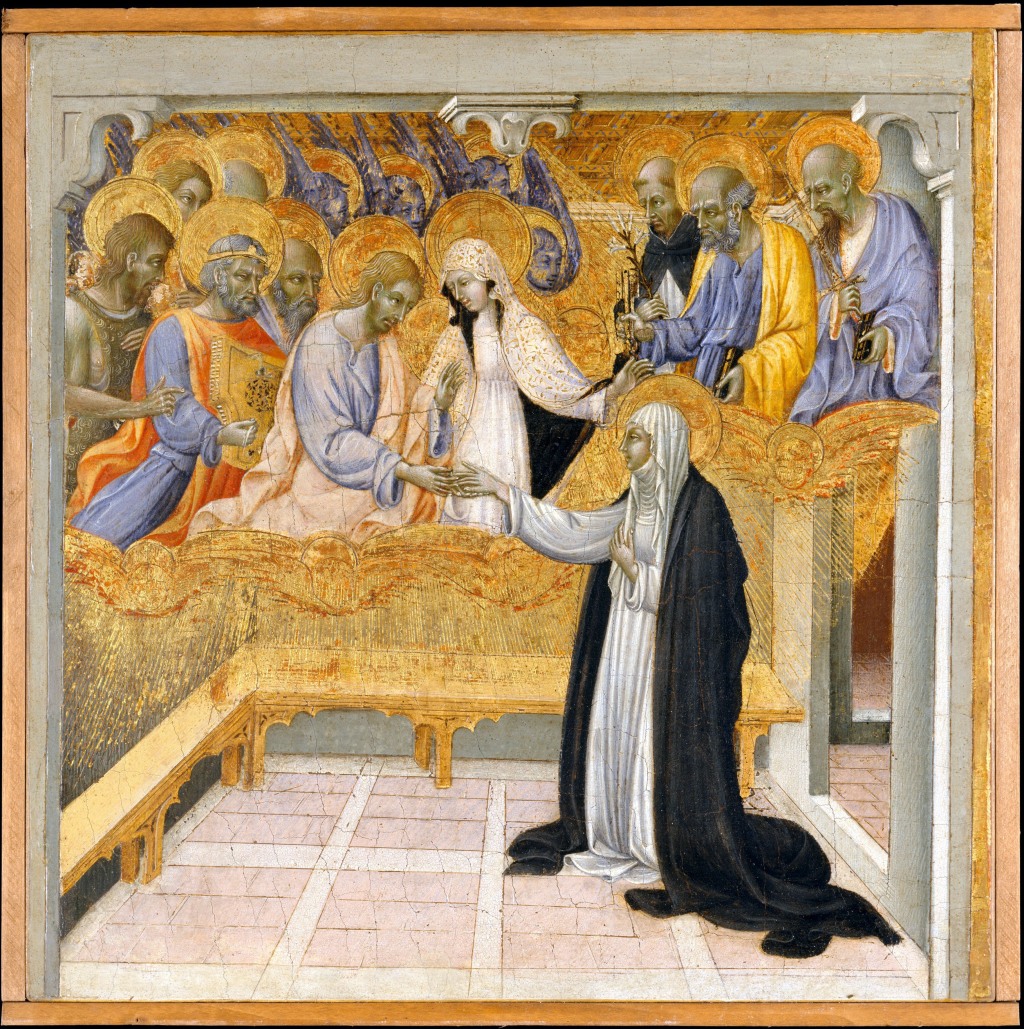 Saint Catherine of Siena (1347-1380) is an incredibly complex figure, an immensely influential and vastly charitable saint of great faith on the one hand, and a stubborn, headstrong, and deeply, fatally flawed human on the other. Her spiritual wisdom, particularly in her Dialogue, is so renowned that she, along with Teresa of Avila, was named the first female Doctor of the Church. Her mystical visions and extravagant gestures were earthy and extreme. Her political counsel and spiritual advice were heeded by the highest echelons of ecclesial leadership. She followed her vocational calling of vowed virginity, charitable work, and prayer in community to the extent that she forged a new active religious community (within the Dominicans) beyond the bounds of the traditional cloistered women religious of her day. Catherine worked out for herself a role, or rather a number of roles, that both conformed to and went against fourteenth century ideals of holy women, which served a variety of needs of the Church and the local community, and which resonate with us still today. Catherine’s complexity defies easy characterization, and her fans continue to revel in her wonderfully weird and multifaceted holiness and wisdom still today.

I have always been fascinated by Catherine of Siena, and not just because of our shared name. Sometimes I think I’m drawn to Catherine simply because of how bizarre some episodes from her life are. I’m fascinated by how graphically embodied her mystical visions are, how physically present Christ becomes, and, conversely, how mystical her corporal works of mercy become in her retelling. In one memorable vision (memorable in that I will get the image out of my head), Catherine recounts a vision of union with Christ. As Catherine tells it, Jesus appeared to her and declared his intention to make her his mystical bride. Now, lots of women mystics in the Middle Ages had such visions. But only Catherine’s mystical marriage included a wedding ring from Christ, made of his own flesh: the foreskin from his circumcision. Some explanation: the relic of the Christ child’s foreskin was a famous and popular medieval relic—so famous, in fact, that more than one church claimed to possess the holy foreskin. Moreover, the idea of Christ mystically wedding Catherine with a ring of his foreskin evokes not only eucharistic language (communion through the flesh of Christ), but also covenantal imagery (as it was circumcision which marked Jewish men as inheritors of the Abrahamic covenant). So Catherine’s experience of mystical union with Christ in marriage was perhaps not unlike entering into her own personal covenantal union with God, expressed in language of eucharist and devotion, understood in a very much embodied manner.

Other times, I think that I’m amazed by Catherine’s many correspondences and meetings with important ecclesial and political figures in her day, many of which featured Catherine critiquing clerics’ personal moral failings or chastising the pope over the great scandal of the church at the time: the residence of the papacy in Avignon, France, instead of in Rome. Or I sympathize with her youthful vocational daydream to run away, dress as a man, and try to enter the Dominican order to fulfill her dreams of serving the Church and ministering to her fellow Christians.[1] Or I marvel at the unique ministry that she developed as a third-order (lay) Dominican, gathering followers around her, founding her own religious community, and acting as a pastoral leader of men and women.

And yet, there is also the terrible tragedy of Catherine’s illness and death which fascinates modern readers. Catherine is frequently (and perhaps erroneously) called a “holy anorexic” by scholars today. While Catherine’s dietary habits certainly seem to align with the classic symptoms of anorexia—after some years her strict fasting made her weak and ill and she attempted to subsist on only raw vegetables and the Eucharist—it is historically anachronistic and irresponsible to ascribe modern medical conditions to historical figures and it blinds us to their own understanding of themselves. Nevertheless, Catherine admitted to her confessor, Raymond of Capua, that she knew that her fasting was making her ill and later, when the time came that she could no longer consume even the Eucharist, she acknowledged that her impending death was due to her own ascetic habits. For many medieval women like Catherine, giving food to the poor went hand-in-hand with denying oneself food: not only did they experience hunger in solidarity with the poor, the food that went to the poor was the food that they would have eaten. It was a commendable practice of self-denial for the sake of others. But for Catherine, her denial of self for the sake of others eventually led to others being denied her presence due to her extended decline and eventual early death. Nevertheless, the tragedy of Catherine’s death and her unintentional role in it does not diminish the holiness of her life; Catherine of Siena was holy in part due to her flaws, even her fatal one, as she continued to point others to Christ even as she faded away in her illness.

I could go on and on about the intricacies of Catherine’s particular life of holiness, especially the tragedies, the miracles, the bizarre episodes, and the bold speeches to Church leaders which make her story and persona so fascinating even six centuries after her death. I could point to Catherine’s incredible spiritual wisdom which earned her the title “Doctor of the Church.” I could recount more of her mystical visions or heroic charitable deeds or cite her example as a religious leader and voice of prophetic censure in the face of Church scandal. To do justice to the many facets of Catherine’s holy life would take volumes; it is more than can be covered in one post on Daily Theology and one feast a year. But we do not truly honor Catherine as a saint of the Church by simply recalling stories from her life or naming her virtues. Catherine of Siena, in her complex sanctity and complicated memory, demonstrates for us just how dangerous it is to oversimplify saints for the sake of making them more palatable, more relatable, and more easily categorized. And so, with Catherine and with other saints, we often take bits and pieces of the story of a holy life, break it down so that we might understand it, and retell it according to this cliché or that classification. We sanitize the gore, play down the extreme, gloss over the flaws, and domesticate the unruly aspects of the saints; we turn their remarkable, even revolutionary, witness to life in Christ into just another moral model or example of virtue. To caricature the saints or to ignore parts of their lives is to rob them of the humanity, taking away their human foibles and making them into our own image of saintly perfection. In turning the saints into models, we frequently make their example unattainable.

To remember Catherine without her prophetic voice, without her spiritual wisdom, her tireless charity, her mystical visions, her pastoral leadership, or without her very human flaws is to strip away what made her unique holiness worthy of memory, veneration, and emulation in her local community and in the universal Church. Celebrating the feast of Catherine of Siena means honoring her holiness beyond mere hero worship or moral emulation. To only recount her life is to make her into a legend; to hold her up as just a model of holiness is to reduce her to her virtues and ignore the foibles which colored her sanctity. Certainly, there are aspects of Catherine’s vocation, even ministry, that are exemplary in one way or another. But Catherine, in all her roles and with her many virtues, is more than a mere model for us today, be we Italian, women, theologians, Dominicans, witnesses of Church scandal, children of large families, sufferers of eating disorders, or whatever else may draw us to Catherine. Catherine is venerated by the Roman Catholic Church today, like all the saints on their feast days, not as just a model of virtue, but as someone who knew Christ’s love so intimately that Christ was made manifest in her life. Saints are memorialized in the Church because their union with Christ was so evident when they lived that, after their deaths, we turn to them in prayer as friends of God and mark their place in communion of the saints through Eucharistic communion on the anniversary of their deaths. We recount the details of their holy lives not because we should strive to follow their example precisely, but because their lives give witness to the countless manifestations of discipleship in every age, culture, locale, race, class, status, and according to every gift imaginable. The saints’ lives are not patterns for how everyone should try to follow Christ—there are far too many saints, too many holy lives for that. Rather, the saints’ lives point us to Christ, and, in turn, to seeking out our way of following Christ in our particular historical and vocational circumstances. Catherine once said, “Be who God meant you to be you will set the world on fire.” Catherine of Siena is not a saint because she perfectly fits the mold of what it is to be a holy woman, or Doctor of the Church, or mystic, or aid worker; she is a saint because she was her authentic self before God, complete with gifts and strengths, weaknesses and weirdness, for the sake of Christ and others. Simplistic saints encourage superficial faith. We need to keep our saints complicated because they, like Catherine of Siena, show us in their complex witness how we are all called to holiness by embodying Christ in the particularities–and the complexities–of our own lives.