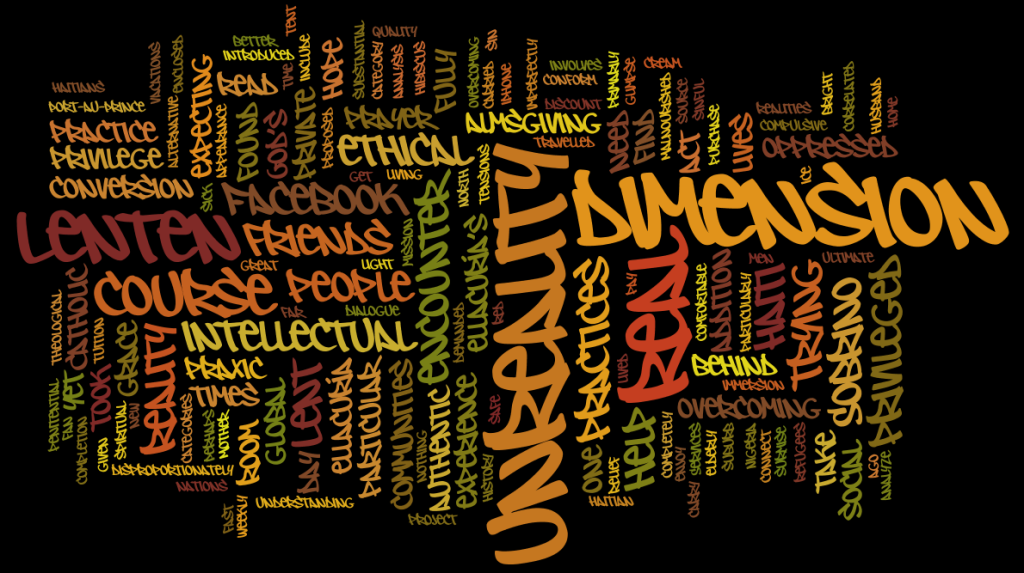 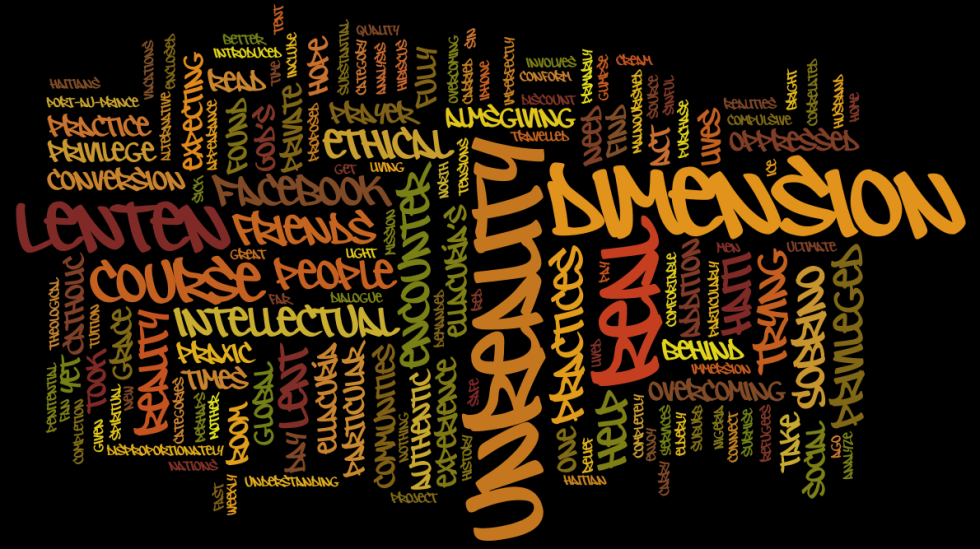 The bright white sheets were crisp and comfortable as an industrial-sized fan blew nearby, shielding me from the sweltering sun.  A red hibiscus tree beckoned from the balcony, but I couldn’t crawl out of bed.  I was in Pétionville, the richest suburb of Port-au-Prince, Haiti, far from the tent camp communities I had witnessed the day before.  The students and professors with whom I had travelled were off to feed infants at Mother Teresa’s Home for the Malnourished.  I stayed behind to help care for a sick student and despite my repeated efforts to help the Haitian men clean the Catholic mission, I ended up alone in my room, purchasing a kindle book about Haiti on my iPhone, protecting myself from any real encounter.

The scene depicted above took place two years ago this week when I co-led an Alternative Break Service Trip to Haiti.  The point of the experience was primarily immersion as the title of the course, “global solidarity,” suggested.  Even as the one who designed the course, I found myself at odds with the need “to be useful” and with a desire to connect in an authentic way with Haitians.  I was not, however, able to effectively analyze this experience until I took a course called “Christology, Marginality, and Power.”[i]  This course introduced me to the thought of Jon Sobrino, in particular his phrase:  “the unreality of living in privilege.”[ii]  In my pristine and private room, I failed at real encounter and instead enclosed myself in a sort of unreality.

Perhaps the unreality of the privileged refers to postmodern ways of existence in North America and other rich nations:  obsessive online shopping, compulsive use of social media, disproportionately private yet “safe” lives lived behind gated communities, and excessive, escapist vacations.  Personally, I attend, anonymously, a suburban parish where nothing is really demanded of me except a weekly check to secure my son’s tuition discount.  I surround myself with friends of my own race and class who share my political views.  I sometimes find it easier to read about a particular group of people and their suffering in abstract than to risk dialogue with actual people in their context.

This Lenten season, I am trying to conform my spiritual commitments to the insights of Sobrino and his mentor, Ignacio Ellacuría in a hopeful first step toward overcoming unreality. Lenten practices traditionally include prayer, fasting, and almsgiving and these can be correlated to the three theological categories of reality proposed by Ellacuría:  the intellectual dimension, the ethical dimension, and the praxic dimension.

The intellectual dimension invites us to pay attention to the signs of the times.  This Lent, I am trying to read the newspaper every day and to keep the oppressed at the center of my prayer.  The realities of global conflicts have become more real to me in light of friends from Syria and Nigeria sharing their experiences.  I do not know and cannot take on their pain or fear, but I can pray.

The ethical dimension of reality is more metaphysical and involves examination of sin, individual and social. Though I do not claim to have the most penitential fast in the history of Lenten practices, I have given up Facebook (which admittedly was one source, perhaps unreliable, of news!).  I have found, as I’m sure many have, that Facebook is its own version of unreality.  And the more I scroll through Facebook posts, the more certain tensions (related to appearance or material things) rise up in a sinful unreality of privilege.

The praxic dimension points to a process of conversion, particularly of the privileged, to take on “an obsession with being ‘real’ in a world of poor people.”[iii]  During Lent, my husband and I are trying to teach our sons to give through the Catholic Relief Services’ Rice Bowl project.  It was going well until we needed fifty cents to purchase ice cream at school!  In addition to this act of almsgiving, I will volunteer several times this Lent with elderly refugees from Bhutan.  I am not expecting to improve the quality of their lives significantly and I am not expecting a substantial conversion as a result of spending time with these new friends.  But I do hope I can better be myself, that I can “get real,” and in so doing enjoy an authentic encounter.

To Ellacuría’s analysis, Sobrino adds a fourth category:  “letting ourselves be carried by reality, (the dimension of grace).”[iv] I cannot imagine a more fitting Lenten practice to prepare for the sacred Triduum, the mystery that is historical, real, and yet completely beyond understanding.  There is no intellectual, ethical, or praxical act that can help me fully surmise these events, and so I must be held by grace.  In addition, I carry out my Lenten practices (and most attempts at discipleship) imperfectly and need God’s assistance constantly.  I hope to receive the Eucharist on Easter Sunday and in Christ’s glorious absence find Him fully present.  In this practice, I believe, both privileged and oppressed begin to glimpse the in breaking of God’s great reign, the completion of Ellacuría’s circle, the ultimate overcoming of unreality.

Arlene F. Montevecchio is a doctoral student in Theology at Duquesne University in Pittsburgh, PA.  She is married to a fellow theologian, Caesar, and is the mother of Andrew and Damian.

[i] The course was taught by Dr. Elisabeth T. Vasko at Duquesne University in the Fall of 2014.  Her recent monograph, Beyond Apathy:  A Theology for Bystanders is also of influence to me.