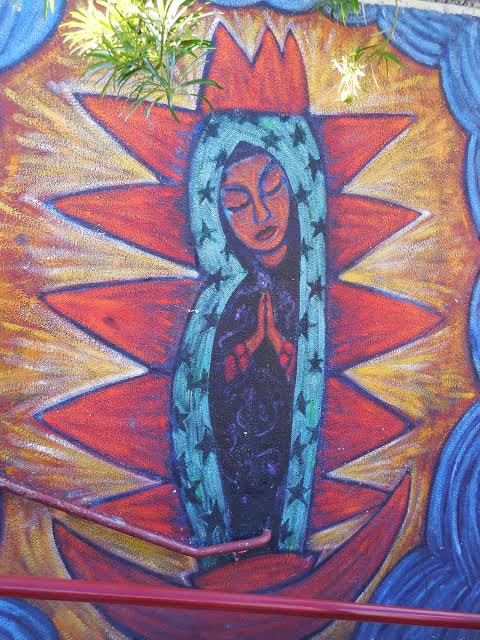 The year I started kindergarten, my parish school began to undertake the installation of a statue of Mary outside our classroom.  Much of that first year of school, my tiny classmates and I were instructed to stay away from what they called “Mary’s area” because the workers were making a place for her.  It was dangerous, they said.  Don’t get too close.  We don’t want any of you to get hurt.

I remember looking forward to seeing what she’d look like when the sculpture was installed.  And being curious about it in the interim.  What color would her hair, her eyes be?  Would she look like my mom?  I wondered to myself.  We had colored pictures of Mary during seatwork.  Little arguments had started as a result of what we had colored.  There were blonde Marys and brunette Marys and Marys with different shades of skin.  Whose Mary is right? we wanted to know.  In retrospect, I wish someone had been there who would have told us something about what we can know about Mary of Nazareth with some modicum of historical accuracy in terms that little ones could have understood.  Someone to tell us that she was Jewish, that she was from a poor, rural community, that her features would’ve been dark, that her skin would’ve been ruddied and worn from work outside, often at a common hearth.  Someone to tell us that it is alright for us to image Mary as what we see to be beautiful.  But that someone wasn’t there.  Just my kindergarten teacher, telling us not to pick fights and to put our fat and clumsy crayons back in the right boxes.

The workers finished installing the sculpture of Mary near the time our school year ended.  For whatever reason, the artist had hollowed out the parts of her eyes where pupils would have been, and the results were horrifying to my five-year-old imagination.  Little me conjured up the idea that her head could move, that those eyes could follow me wherever I went.  I was afraid that the holes were there in the place of pupils because of the laser beams surely hidden within the stone statue.  Not wanting to be burned with the heat from her laser eyes, I scrambled with my friends from the kindergarten classroom to the sandbox where we played during recess, crying, “Scary Mary!  Run!”

As a teenager, I didn’t understand why so many women in my community had such a devotion to Mary.  She had been presented as Mary, meek and mild, and those were attributes to which I did not aspire.  Quiet and demure, the Mary I met during my adolescence silently pondered things into her heart, as our seventh-grade Christmas play told us.  I balked against an image that disallowed me the freedom and independence I so desperately sought as a teenager.  Because the images of Mary with which I was presented felt confining, I refrained from praying “Hail Marys” with my community, and I ignored her during private prayer time.  The Mary with whom I grew up felt suffocating, too saccharine to have anything real or satisfying to say to me.

My relationship with Mary remained that way until I started spending time at the Catholic Worker in Santa Ana during my undergraduate work.  There, I met Our Lady of Guadalupe for the first time.  She’s beautiful, I thought.  Her skin mirrored my mother’s, and her downward gaze communicated to me a kind of simplicity and humility I admired.  And her message to the Indigenous catechist Juan Diego was one of radical love, of unconditional acceptance and affirmation.  As the women and men in the community around the Catholic Worker house lifted her statue and carried her into the streets, they sang, and I was struck by the lives they lead.  These women were not like most of the women in the comfortably middle-class parish where I grew up.  They were involved in detention ministry, visiting teenagers, women, and men in prison and sharing with them the Gospel and the Eucharist we hold so dear.  They fed not only their own families, but also the hungry and the working poor in Santa Ana.  They were women who honored their vocations in ways that broke down the binaries between male and female, public and private, activity and passivity.  These were women in whose footsteps I wanted to follow.

When I reflect on the images of Mary that have been presented to me in the Catholic communities of which I have been a part, I am struck by how integral the multiplicity of those images really is to an adult, integrated faith.  Relying on one image once and for all has less potential to feed the needs of a diverse Catholic community.  As we begin the new year, my prayer for our church is that we would be able to foster the kind of community that can hold these many images in a way that is life-giving for all people.