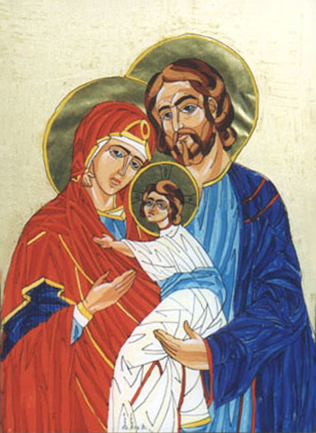 Let me put something upfront: when I agreed a couple months ago to write for the fourth day of Christmas, I did not make the connection that it would also be the Feast Day of the Holy Family. Maybe it was coincidence, maybe it was providence, I don’t know. But in six days I’m getting married, so it’s both fitting and incongruous that I would write for today.

Why fitting? Well, I’ve been thinking a lot about the idea of family in the last year. My fiancée and I have been together a little over four years, and we’re hoping to start having children in the next few. This next weekend will focus on a public, communal celebration of our commitment to one another and to our forming a family together. There will also be BBQ, cupcakes, and dancing.

Why incongruous? Because I don’t really know what I’m talking about. The only wisdom I have about married life is recycled from the genuine stories and the clichéd platitudes I’ve received from others. I guess I have vicarious wisdom, but not yet my own.

In a way, this whole last year, since we got engaged and began talking about a wedding (and continued talking about our marriage), has been a sort of Advent for marriage. Waiting, preparing, staying vigilant. We lived on separate ends of the Eastern seaboard, then we went walking for forty days to Santiago, and now we’re both in Florida. At times, we’ve regretted that we didn’t get married earlier or elope in Spain. But the waiting, the anticipation, has been the overarching reality of this last year. So it’s been fitting, in a way, that our wedding will come in the midst of the Christmas season, less than two weeks removed from the season of advent.

When people in the US talk about the war on Christmas, they rarely ever talk about how our culture has kickstarted Christmas on Black Friday (or Thanksgiving, or just after Halloween). They ignore that, at least in the Catholic tradition, Christmas starts sometime in the afternoon of December 24th, and then continues until the Feast of the Baptism of Christ (following the Feast of the Epiphany). People angry over the secular “happy holidays” miss that, in fact, that might be a more liturgically accurate phrase to use during advent than “merry Christmas.”

Something similar seems to be true about the wedding industry as well. Both are expensive, deeply affected by consumerism (and our wedding isn’t immune from this). And both the pre-Christmas and pre-wedding time period seem driven by the build up to one single, gigantic, dramatic day. I’ve been really grateful for the advice we’ve gotten from several people in the last year: “prepare for the marriage, not just the wedding.” And our marital advent has been that in spades – we had a great experience with pre-Cana, with the pre-marital inventory, with asking each other questions about our own upbringing and our future hopes.

Chief among those hopes is living our vocation to holiness. Lumen Gentium 40 tells us that “all the faithful of Christ of whatever rank or status, are called to the fullness of the Christian life and to the perfection of charity.” We are called to be saints. This vocation is lived in the community of the church, of the people of God, but the specifics and logistics of any one person’s vocation will vary from one to the next. I believe that my call to holiness has, thus far, been intimately and inextricably tied to the person I’ll marry on Saturday. And I hope that through our marriage we can help one another, and our (potential) children, become more holy.

On this feast of the Holy Family, I guess what I am most struck by is that, for Paige and I, we feel that our call to holiness is shaped by our call to marriage and family life. The particulars of that family life will be different from Mary, Joseph and Jesus (Paige is not a pregnant teenager, we are not 1st century Palestinians, our likely redheaded children will most certainly be sinful, and hopefully I won’t disappear after the second chapter of our respective books). Not everyone has a vocation to married life, or to being in this specific type of family (and that diversity is to the good for our wider community). But we all have a vocation to holiness.

Holiness, as I understand it, means being in communion with God, the source of all holiness. It also means being in communion with one another; being charitable, hopeful, and faithful; being prayerful; being open to the working of grace and the spirit in our lives. We sometimes truncate holiness to sinlessness, thinking that if I can just not do bad things then I will achieve holiness. Yet, as I often tell my diaconate students, the primary vocation of the Christian is not the mere avoidance of sin. Besides, when we limit holiness to our best efforts not to be bad, we come perilously close to trying to save ourselves.

But then again, what do I know. This is just vicarious wisdom borrowed from my tradition. Here’s hoping that, as Paige and I tilt into the messy and mundane reality of marriage, we find new and sustaining ways of incarnating God’s love for each other and our neighbors.