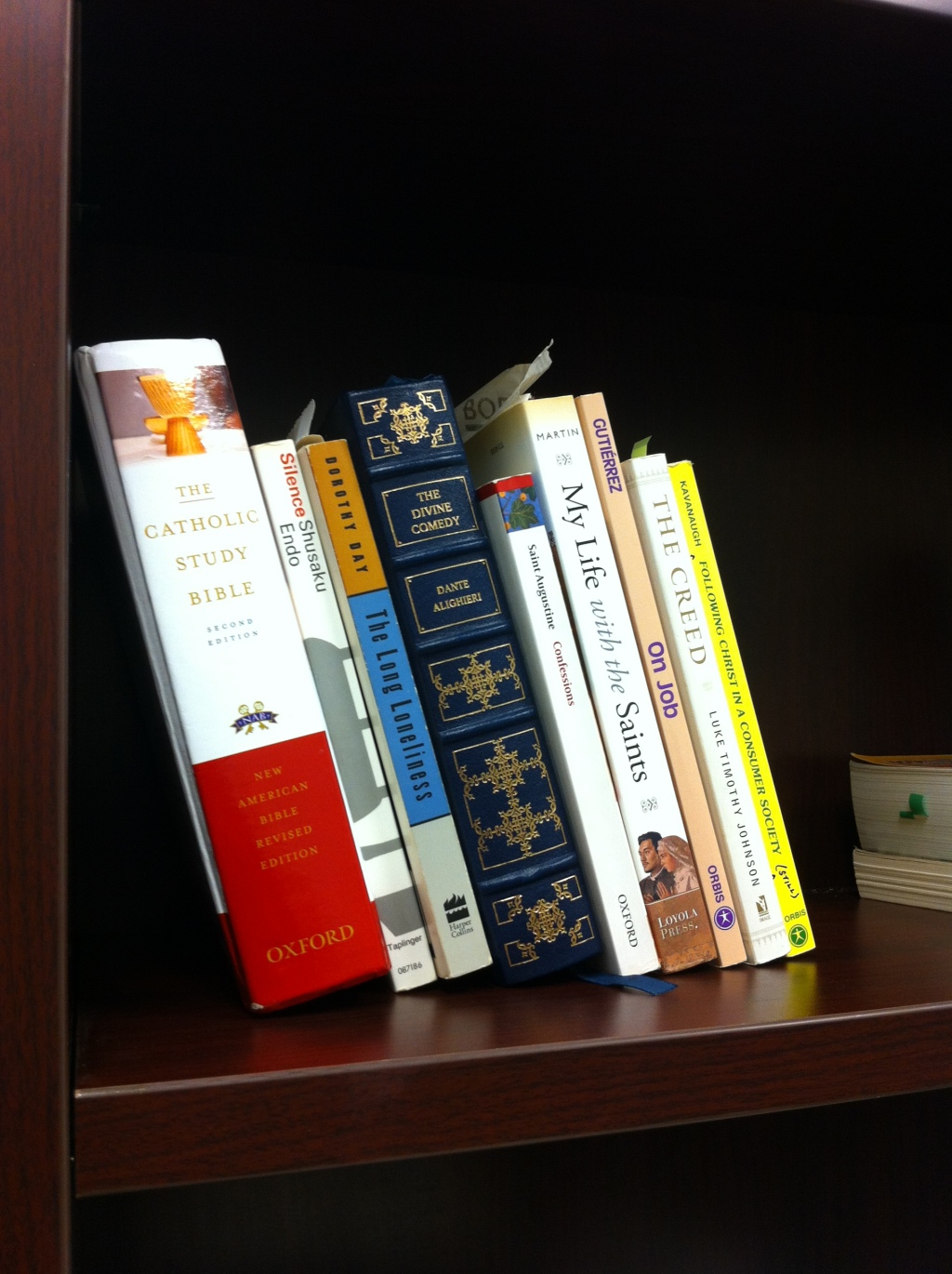 To be frank, this post comes from the confluence of three things. First, there’s a meme going around the old Facebook where those who are tagged are asked to name 10 books that have had a significant influence on them or that have “stuck with” them. I imagine most nerds like me had trouble narrowing this list down to ten, but I found it a fun exercise in self-reflection and nostalgia.

Second, this post a couple weeks back proposed a list of five books that every Catholic college student should take with them to their dorms. Although the intention was probably noble, that list is hampered by a narrow understanding of the Catholic college student as someone who better be prepared to do apologetics (defense of the faith), presumably against the godless heathens they will meet.

Finally, by now, nearly all colleges and universities in the US have begun their fall semester (my own institution started classes two weeks ago). And as students begin a new semester (the first for many), I thought it might be worthwhile to bring together the two pieces above and make a list of ten books that I would recommend for college students who identify as Catholic or are interested in Catholicism.

Of course, disclaimers: this list comes from my experiences, and thus is necessarily limited. Some of these books had a real influence on me in college; others I wish I had discovered in college (or that they had been written earlier!). They range in genre and level of difficulty, and many of them could be swapped out for another insightful text. The list is not meant to be comprehensive or thorough, nor is it presented in any particular order or ranking. Also, there are some books not recommended because they’re obvious (e.g., yes, Catholic student, you should have a Bible). With that out of the way, here are my ten:

– Shusaku Endo
Silence is a historical novel written largely from the perspective of a Portuguese Jesuit missionary in Japan. At my previous institution, I assigned this book to students at the conclusion of a course segment on Christology, usually to great success, because of two key themes it brings together so beautifully. First, it raises the question of the particular and the universal (so important for thinking about Jesus as God made human as a first century Jewish man) by asking about what it means for Christianity to take root in Japanese soil (can also help with teaching Matthew 13). Second, it shows how similar Peter and Judas are, as one character throughout the text vacillates between the two, and how challenging a question that can be for one who considers the self to be a disciple.

– Dorothy Day
Dorothy Day’s autobiography is a text I’ve never successfully finished in one go. It has frustrated me, challenged me, and moved me at different times in my life. The powerful witness of a modern day (20th century) person who experiences a powerful conversion, both to Christ and to his poor and vulnerable, powerfully humanizes our notions of holiness. While Day herself said “Don’t call me a saint— I don’t want to be dismissed that easily,” I think her example can push us to try to live the universal call to holiness rather than just passing that torch off to those we dismiss as saints (who clearly must be fundamentally different from our own finite and flawed selves).

Tattoos on the Heart

– Gregory Boyle, SJ
I read this while on the Camino this summer and found it eye-opening. Greg Boyle’s work with current and former gang members in LA is moving and heartbreaking. His call for “boundless compassion,” with the possibilities for conversion, reconciliation, and fulfillment that this can bring in the lives of others, provided a thicker portrait for me of what Jesus’ call to love others can mean.

– Dante Alighieri
Reading through The Divine Comedy in Frank Ambrosio’s class altered the trajectory of my college life both personally and professionally, so I’m certainly a big advocate for it. The text has shaped Western conceptions of the afterlife, but it has a more significant, subtle, and extended reflection on the nature of human freedom and identity, especially as that pertains to our relationship with God and each other. Lastly, the poetry is magnificent, and there are numerous excellent translations to choose from.

– St. Augustine
A classic of the Western tradition, this effort features an adult Augustine reflectively looking at his life and seeing where he believes providence and the grace of God have intervened in his life. When I teach it with undergrads, I particularly like highlighting the beginning of Book III, when Augustine “came to Carthage and all around me hissed a cauldron of illicit loves…I sought an object for my love; I was in love with love, and I hated safety and a path free of snares” (III.i(1)). It can be fun to have them reread that section aloud in class, but replace “Carthage” with the name of the school. More importantly, I think it’s a helpful text for teaching about self-reflection.

Quest for the Living God

– Elizabeth Johnson
This pick is apparently controversial, but Johnson’s text here is both accessible and challenging for traditional college age students. In particular, it can help the college student think about the challenge and limitations of using language to understand God. It also models a diversity of ways of thinking about the divine. The text was inaccurately and wrongly maligned by opponents, but for more advanced students the experience of following the text’s controversy is an instruction all its own.

My Life with the Saints

– James Martin, SJ
I tend to be hot and cold on Jim Martin’s books, but I think this one is well worth it. Martin not only gives great descriptions of a select set of Catholic saints, but he also models an imaginative way of appropriating the key lessons of their lives. Thus the reader both gets an introduction to some significant examples of human sanctity and sees the real day to day relevance of those lives. Again, we are all called to be holy, to be saints, and far from dismissing them, we ought to see how we can be like them.

On Job: God-Talk and the Suffering of the Innocent

– Gustavo Gutierrez
This relatively short text does two things really well: (1) it introduces Gutierrez’ thought and the broader area of liberation theology in a way I think more accessible (but no less challenging) than his A Theology of Liberation and (2) it channels that approach and the concern for the marginalized through an examination of the biblical figure Job (which is a book from the Bible I keep coming back to). It is challenging and insightful, and I believe can help many (myself especially) develop empathy through seeing the world and the reality of suffering through another’s eyes.

– Luke Timothy Johnson
I taught an introductory class with this book one year, and although it wasn’t great for the course I really liked it on its own. Johnson does a really good job of working through the Nicene Creed and looking at the scriptural and historical background for it. It’s a helpful way of reflecting on something that many Christians say without thinking. Also, he at times does a very good job of highlighting some of the issues within the creed (East-West relations, gendered language) that point to some of the “real world” salience of statements like these.

Following Christ in a Consumer Society

– John F. Kavanaugh, SJ
This book is at times infuriating and at times inspiring. His attack on consumer culture comes across like a broadside, designed to overwhelm and even antagonize the reader. But it’s usually effective and pushes the reader to recognize how profoundly one’s culture shapes one’s views. Moreover, it points out the very real way that a consumer mentality can shape one’s faith while offering (some limited) ways of responding.

Of course, this list is limited and comes from my own finite experience and context. Please feel encouraged to offer your own books or lists in the comments below.