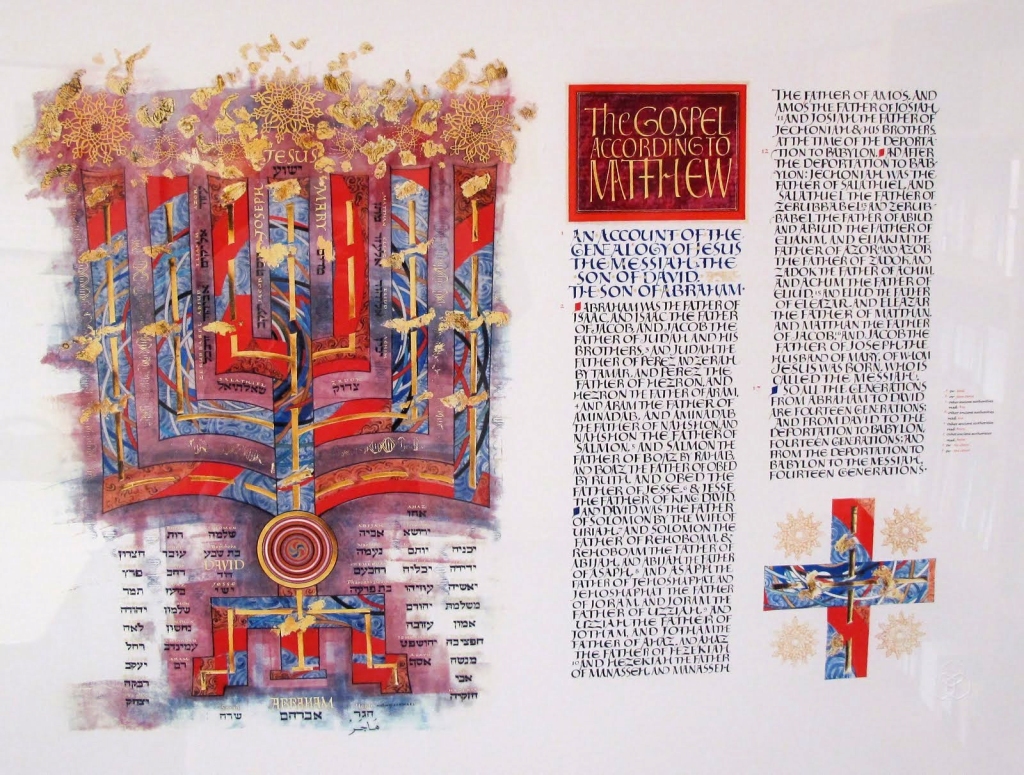 The stereotype about most Catholics is true: we don’t know our Bible, especially the Hebrew Bible. Because of this, the Gospel of Matthew poses a challenge, because it depends so explicitly upon the history, narrative conventions, and images of ancient Israel.[1] This is a timely challenge, as the Catholic and Revised Common Lectionaries are in Year A right now, which draws from Matthew’s Gospel for most of the Sunday Gospel readings.

Even more than the other Evangelists, Matthew finds it impossible to understand Jesus apart from understanding Israel. He has fourteen explicit allusions to the Hebrew Bible in which Jesus is portrayed as fulfilling some aspect of Israel’s history,[2] and he divides his gospel into five major units,[3] much as the first five books of the Hebrew Bible are divided. Matthew demands a lot from us, because we have to forget what we thought we knew about Jesus in order to enter a new and difficult imaginative space: the world of ancient Israel and its history.

Who is Jesus for Matthew? The two titles at the beginning of Matthew’s gospel stand out: “the son of Abraham [i.e., Israel]” and “the son of David [i.e., the King of Israel]” (Matthew 1:1).

The Son of Abraham: “Israel-in-Person”

The New Testament scholar N.T. Wright describes Matthew’s Jesus as “Israel-in-person.”[4] Matthew’s opening genealogy connects Jesus with the entire history of Israel, including the sinful, outlandish characters in this history (Matthew 1:1-17).[5] But Matthew does not simply let this reality reside in the family tree: Jesus’s life repeats the most important events in Israel’s history. Let’s hit the highlights reel:

This is the one of the primary meanings to which Matthew appeals in his description of Jesus as the “Son of God.”[6] Though we often immediately think this is a statement about Jesus’s eternal nature, Matthew often intends this as a description of Jesus’s life: Jesus is the personification of Israel, whom the Lord calls “my firstborn son” (Exodus 4:22-23) and whom the prophets identify as God’s son (e.g., Hosea 11:1).[7] As an image condenses symbolic meanings to a single point (e.g., the American flag representing American ideals, a way of life, etc.), so Jesus condenses Israel’s history and identity in his person. Matthew claims that who God’s people are and what God’s people ought to do can be found in this one historical individual.

The Son of David and the Son of Man: The Unexpected King of Israel

Matthew also shows Jesus is the “Son of God” by portraying him as the ideal Davidic king, “the son of David” (Matthew 1:1).[8] As recorded in songs for the coronation of an Israelite king (cf. Psalms 2 and 110), Israel borrowed the tradition of understanding its king as God’s son from other ancient Near Eastern cultures. Such a Davidic king had been absent from Israel since the time of its exile (ca. 587 BCE). Moreover, in the apocalyptic traditions of Israel, this Davidic kingship becomes associated with the mysterious figure of the “Son of Man” who will shatter in a permanent way the intolerable rule of foreign kingdoms that persecute Israel (Daniel 7:13-14, 27). Though this phrase can also be translated simply as “human being,” Jesus’s use of this to describe himself (e.g., Matthew 8:20; 9:6; 10:23; 11:19; 12:8) immediately places him within a royal and apocalyptic context in which God has given surprising authority to a human being.

This oversimplified survey indicates how many models of kingship were at play in the Israelite imagination of Jesus’s and Matthew’s time. What kind of king would be the one who restored Israel? Would he be a military warrior scattering God’s enemies, like David? Or would it be a king like the literal son of David, Solomon, who established peace throughout Israel, built the Temple where God dwelt with God’s people, and was immensely wise despite his disastrous relations with the Gentile nations? Even more, how exactly would this royal figure destroy the dominion of the inhuman nations and make Israel’s kingdom “an everlasting kingdom” (Daniel 7:27)?

Conflicting understandings of this royal authority disastrously play themselves out in ways which lead to Jesus’s death. No one understands what Jesus is doing: the new thing which God is doing in Jesus—Matthew’s “kingdom of heaven”—does not easily fit with what Israelites had imagined it to be, even those best trained in the Law and history of Israel (the scribes and the Pharisees). Jesus’s disciples equally do not understand it. Though Jesus commends Peter as the rock upon which he would build his church for recognizing him as “the Messiah, the Son of the living God” (Matthew 16:16-18), he reverses this image within five verses, condemning Peter as a stumbling block when the latter does not see how Jesus’s foreordained suffering fits in with his kingship (Matthew 16:23).

For Matthew, this king of Israel is one who not only leads the people but carries their sufferings, experiencing everything that they have experienced, who conquers by the power of God rather than by human power.[9] Jesus does not resist the machinations against him by the political and religious leaders of his day, who mock his kingship as a failure (Matthew 26:67-68; 27:27-31). Rather, he puts his trust in God, as seen explicitly in the quotation of Psalm 22, a psalm of trust, as Jesus’s last words in Matthew 27:46, and this God—counter to all expectations—raises this unlikely king from the dead to reign forever (Matthew 28:18: “All authority in heaven and on earth has been given to me”).

This is a surprising king indeed: no king in Israel’s history conforms to this model. For all of his previous allusions, Matthew does not give any allusion to the Hebrew Bible in order to justify Jesus’s resurrection in Matthew 28 (as opposed to Luke 24:26-27). This is a new king, one through whom God is acting in ways we didn’t expect.

In reading the Gospel of Matthew, one might be reminded of the story of Jacob wrestling with the angel (Genesis 32:22-32): we must wrestle with several entities in order to understand Matthew’s Jesus. This includes the history of Israel, the new thing God is doing in Jesus, our expectations, and the surprising eclipse of Israel’s history[10] and practice in much Christian theology. To see who this “son of Abraham” and “son of David” truly is, we must enter an imaginative world different from our own: the history and life of Israel. We must be surprised at how Jesus fits and does not fit our expectations, but we must also see how Jesus fits the pattern of God’s faithful actions throughout Israel’s history.

By our sharing in the body of Christ (Israel-in-person), we come to recognize that Israel’s history is our history too and that our God is the God of Israel. There are many truly problematic passages in Matthew regarding the Israelites of his day, passages that have had horrific anti-Semitic histories of interpretation in Christian churches.[11] These passages and their history cannot be smoothed over or erased from our consciousness: they are scandals and reminders of our historic sinfulness. But the Gospel of Matthew asks us to imagine differently in a way which might draw us closer to our Jewish brothers and sisters, who also understand themselves as continuing the story of Israel. For it is impossible to understand Matthew’s Jesus—and thus we ourselves who long for the kingdom of heaven announced and embodied in Jesus—apart from the story and life of God’s people, Israel.

[1] My use of the term “Israel” throughout this post refers not to contemporary Jews but to the historical entity which existed in ancient Canaan from ca. the 11th century BCE until 70 CE (i.e., from the establishment of a monarchy in Israel until the destruction of the Temple). This is the entity whose narratives, poetry, and prayers are recorded in the Hebrew Bible, and it is from this entity that both modern-day Christians and Jews trace their lineage.

[3] These sections end with the characteristic phrase: “when Jesus had finished saying all these things…” They include the Sermon on the Mount (Matthew 5-7); Jesus’s instructions to his disciples as they go out to spread the news of the kingdom of heaven’s coming (Matthew 10:5-42); Jesus’s parables (Matthew 13:1-52); Jesus’s instructions for the community life of his disciples (Matthew 18:1-35); and Jesus’s “little apocalypse,” foretelling the destruction of the Temple (Matthew 24-25).

[5] For one of the best short descriptions of the scandalous character of Jesus’s genealogy, see the following sermon: Herbert McCabe, “The genealogy of Christ,” in God Matters (London and New York: Continuum, 2005), 246-249.

[7] Even here, though, one can see the seed of later Christological ideas. Jesus instructs his Israelite hearers to act in a different way than the Gentiles, to “[b]e perfect, therefore, as your heavenly Father is perfect” by loving their enemies in imitation of the Lord’s providence for good and evil alike (5:48, 43-47). Israel’s conduct is meant to reflect God’s; as Jesus is “Israel-in-person,” loving his enemies even to death, he is the ideal reflection of God’s action.

[10] I am indebted for this formulation to Professor Randall Zachman. 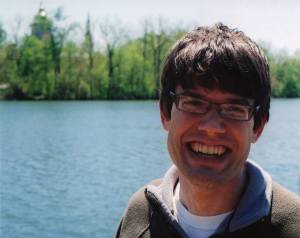 Michael Rubbelke is a doctoral student at the University of Notre Dame. He received his Master of Theological Studies degree from Notre Dame (2010) as well as a B.A. in English and Theology from St. John’s University (2008). He also previously taught at St. Mary’s Central High School in Bismarck, ND. His research interests focus especially on the relationship of spiritual practices and saints’ lives to systematic theology. He especially appreciates the work of Rowan Williams, Herbert McCabe, Gustavo Gutierrez, and Sarah Coakley. After three years of marriage, he still delights in the fact that his wife Rebecca remains the best conversation partner he’s ever met.