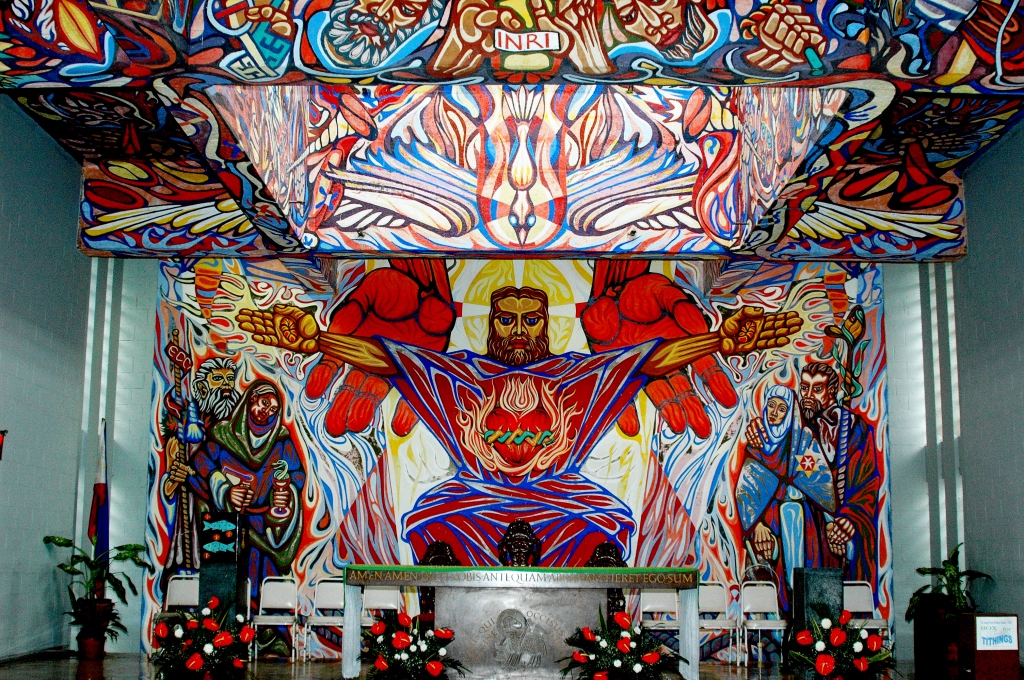 As Vacation Bible School continues here at Daily Theology, I would like to turn our attention to the Gospel of Luke–in particular, to a passage I like to call “the most difficult words of Jesus.”  In this brief passage, Jesus rips apart several accepted cultural images of family and ministry…so much so that I find the words difficult to digest, even thousands of years later.

For which of you, intending to build a tower, does not first sit down and estimate the cost, to see whether he has enough to complete it?
Otherwise, when he has laid a foundation and is not able to finish, all who see it will begin to ridicule him, saying, “This fellow began to build and was not able to finish.”

Or what king, going out to wage war against another king, will not sit down first and consider whether he is able with ten thousand to oppose the one who comes against him with twenty thousand? If he cannot, then, while the other is still far away, he sends a delegation and asks for the terms of peace.

So therefore, none of you can become my disciple if you do not give up all your possessions.”

I find this passage startling.  How is Jesus calling us to “hate” our family members?  And why is discipleship compared with meticulous planners and military commanders?  Finally, is he serious about giving up all of our possessions?  What does this mean?

In terms of family, there is something very forceful about Jesus’ call against both your own life and your relationship with family members.  So much so, as Sonja of Women in Theology points out, that this passage stands in stark contrast to other passages that seem to support the contemporary notion of the nuclear family.  Instead of affirming the “holy family” of Joseph, Mary, and Jesus–as we so often do today–Jesus defies the archetype of the biological family.  “Whoever comes to me and does not hate father and mother, wife and children, brothers and sisters…”

Jesus pays no vanity to cultural pride marked with blood.  There is no inherent duty to those whose genetic code is similar to your own.  Jesus bristles against the cultural and tribal practices that define “your family” and “your clan” as, simply, your blood.  Kings beget kings through blood.  Business owners pass the business down through their blood.  In Jesus’ day, all land and possessions were typically given to the eldest son of the family–a practice not only based upon blood, but on specific interpretations of the use of blood and blood-lines.

Jesus, undoubtedly, finds this unacceptable for the true disciple.

Thus, the first section of our difficult reading is best read not in terms of some familial archetype based around contemporary portrayals of the birth story, but in terms of Luke 8, where Jesus argues that “My mother and my brothers are those who hear the word of God and do it.” (Luke 8:21)  Similarly, if you actually read the birth story in Luke, you don’t get a nice scene of Shepherds and Wise Men and animals–you get prophecies, prophecies, and more prophecies–all coming from various people on the edges of society: a pregnant teenager (Mary), an old pregnant woman (Elizabeth), a previously-mute disbelieving father (Zechariah), shepherds who were given the night-shift, an old man who wandered into the Temple area (Simean), and prophetess named Anna, who, Luke writes, approached Jesus just as he was offered in the Temple, and “began to praise God and speak about Jesus to everyone who was looking forward to the redemption of Jerusalem.” (2:38)

I mean, really, where is my nativity set that includes Anna preaching about Jesus in the temple??!

Anyway, instead of thinking about family as a biological connection between blood-relatives, Jesus uses forceful language like “hate” to remind us that family is defined through the eyes of God.  We must detest the cultural pressures to only treasure our biological families, and move towards a familial redefinition that incorporates not only the message of the Gospel, but the difficult cross of Jesus.  Family is defined through the Word of God.

Second, in terms of the people who plan–military commanders, etc–it’s another extremely difficult message.  In short, I cannot simply “say” that I’m taking up the cross of Christ, I must show my skill in preparation, in decisive action, in logic, and in strategy.  All of which, according to Jesus, begin with “giving up all your possessions.”

I really struggle with how to interpret this line.  Tradition would call me to interpret the line amid everything else in scripture, from Genesis to Revelation, especially in the context of the other Gospels and accounts of Jesus.  But does such interpretation overly downplay the impact of Jesus’ forceful words?

Possible Interpretation 1.  If I call the “possessions” spiritual ones, I can contextualize the words through a theological spin on the shedding of spiritual possessions–you know, don’t hold grudges, don’t be angry, etc.  You can “give up all your possessions” by repenting of your past sins and forgiving those who have wronged you.  This would contextualize the line through Luke 6:42: “how can you say to your neighbor, ‘Friend, let me take out the speck in your eye,’ when you yourself do not see the log in your own eye? You hypocrite, first take the log out of your own eye, and then you will see clearly to take the speck out of your neighbor’s eye.”

Possible Interpretation 2. If I call the “possessions” actual physical things, I can contextualize the words through a spiritual detachment from the possessions themselves.  Sure, sure, you can own stuff, but you can’t be attached to it.  You must “give it up” spiritually to God before sharing the Gospel.   This would contextualize it through Luke 12:15, “And he said to them, “Take care! Be on your guard against all kinds of greed; for one’s life does not consist in the abundance of possessions.”

Possible Interpretation 3.  The first interpretation, albeit a nice message, certainly downplays the impact of Jesus’ words.  The second interpretation (which I would consider more common) errs by missing the line just a few verses later in Luke 12 (vv. 33-36), where Jesus says,  “Sell your possessions, and give alms. Make purses for yourselves that do not wear out, an unfailing treasure in heaven, where no thief comes near and no moth destroys. For where your treasure is, there your heart will be also.  Be dressed for action and have your lamps lit; be like those who are waiting for their master to return from the wedding banquet, so that they may open the door for him as soon as he comes and knocks.”

Here, once again, selling what you have seems to precede the action of ministry, the action of welcoming God.  Thus the third interpretation, and I think the only way which gives weight to Jesus’ choice of words, interprets the line through the story of Zacchaeus in Luke 19: 2-15:

A man was there named Zacchaeus; he was a chief tax collector and was rich.
He was trying to see who Jesus was, but on account of the crowd he could not, because he was short in stature.
So he ran ahead and climbed a sycamore tree to see him, because he was going to pass that way.
When Jesus came to the place, he looked up and said to him, “Zacchaeus, hurry and come down; for I must stay at your house today.” So he hurried down and was happy to welcome him.

All who saw it began to grumble and said, “He has gone to be the guest of one who is a sinner.” Zacchaeus stood there and said to the Lord, “Look, half of my possessions, Lord, I will give to the poor; and if I have defrauded anyone of anything, I will pay back four times as much.”

Then Jesus said to him, “Today salvation has come to this house, because he too is a son of Abraham.  For the Son of Man came to seek out and to save the lost.”

For Zacchaeus, a man in a line of work known to defraud citizens, pledges to give away half of his actual possessions and repay those he has taken from by four times.  Jesus affirms this action, redefining God’s Family through the inclusion of Zacchaeus–one who was lost and is now found.

The Hatred of Family and the Giving of Things

I find solace in many words of scripture, but I find little solace in these.  I am a white, heterosexual male who is married with children.  With my spouse, I own a house, a car, and many other things.  While I have far, far less than some people in this world, my relatively small graduate-student stipend places me in the top 9% of the world (see www.worldwealthcalculator.org).  I have wealth, I have privilege, and if I ever complete this doctorate degree, I will theoretically find a job that gives me a decent amount of power over the formation of young minds for years to come.

If the tax-collector Zacchaeus gave up half his possessions to find favor with Jesus, how much must I give?  What if I measure possessions not only in terms of things, but in terms of power, privilege, gender, societal status, class?  Then, tell me, how do I give up even half my possessions?

Is speaking for the powerless enough?  Is it enough to make the invisible visible?  To tell others of the lost of the world?

Despite my love for and full participation in the realms of the academy, I think such actions are vital for all academics who follow Christ, but I do not think they are enough.

The fact is, I do not hate my family and I still have possessions.  And, yet, I desperately want to follow Christ and spread the Gospel in all aspects of my life.  I have come to accept that I must live in this tension…and I appreciate the fowl air such tension sometimes affords.  If my life is not being constantly renewed, constantly challenged, especially given the luxuries I have, then I, quite simply, am not living the Gospel.  And neither are you.

Leave a Reply to “The Canticle of the Turning”: The Gospel of Luke and Radical Imagination | Daily Theology Cancel reply