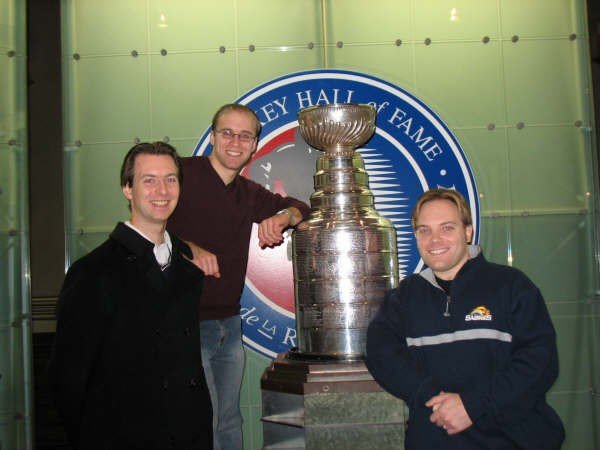 In Buffalo, New York, there are two predominant religions: Roman Catholicism and ice hockey.  Listening to games on my Sony boom box in the church parking lot while reenacting amazing 2-on-1s, breakaways, and saves, I was weaned on that sport as much as my Catholic Christianity as soon as I could say “Schoot’zie scores!!!”  As the Stanley Cup finals began Thursday, with my beloved Sabres conspicuously absent in the basement of the league, I couldn’t help but feel a little despondent.  At the same time, every year as the Cup is lifted by the winners, my eyes well up and I sigh.  Hockey teaches me something about tradition, sacraments, and hope.

The Stanley Cup, unlike most other championship trophies in professional sports, is not recast every year.  It is not the possession of the winning franchise.  It is lent from past and borrowed from future victors.  The names of each team member, their coaches, and team officers are added to a ring on the trophy’s base, and a chaperone accompanies the cup to each player’s home for parades, photo ops, and any other activity in which the team wants to engage with the cup.  Champagne, beer, glacial waters can be drunk from the bowl at the top of the trophy as players and their invitees join a long-storied line of NHL champions reveling in their excellence and athletic achievement.  At the end of the summer, the cup is returned to its home in the Hockey Hall of Fame (Temple de la Renommee du Hockey) in Toronto, Canada for pilgrims to visit and wonder at the history of the sport that drew them to that place.  Even if one’s team fell short last year, there is always next season and the hope that the next time one returns to visit the cup, the names of his or her heroes will be emblazoned there.

That the NHL coined “The Quest for the Cup” as the slogan for its playoffs is not mere coincidence. There is something fundamental in the human experience of epic journey and historic tradition that professional sport capitalizes on every year for its fans.  Attending to that desire in each one of us to seek and find and wonder can enlighten and enrich our religious understanding upon which it is grounded.  Each year millions of people set off on pilgrimages to holy sites like Varanasi, Mecca, Jerusalem, and Santiago de Compostela.  We want to seek, find, and lay our eyes and hands on holiness if only for a brief moment once in our lives, and we are willing to spend years of time and treasure to do so.

We are willing to go to great lengths for the object of our restless heart’s desire even though it may be closer than most of us think.  I saw that recently as I watched the young members of Holy Trinity parish come forth in their finest dress to receive their first Eucharist.  The young man and woman, urged on and supported by their trusted family and friends, approached the paten and chalice with anticipation, nerves, and joy.  A look of satisfaction came over them as they returned to their pews.  The whole procession of events had a fullness and completeness to it that was visible in their faces and visible to me.  I was astounded, humbled, and reminded by these young pilgrims to the altar what an opportunity and grace Catholic Christians have every week—even every day—to seek and find God.

This weekend the Quest for the Cup continues.  In Los Angeles, the Kings and the Rangers will face off as enemies in a bitter competition to see who will drink from hockey’s “holy grail.”  In my parish, and in thousands of others across the world, friends and families will gather in peace and cooperation to drink from the true Holy Grail.  May we anticipate the lifting of the Lord’s Cup as much as those players yearn and strive for Lord Stanley’s Cup.