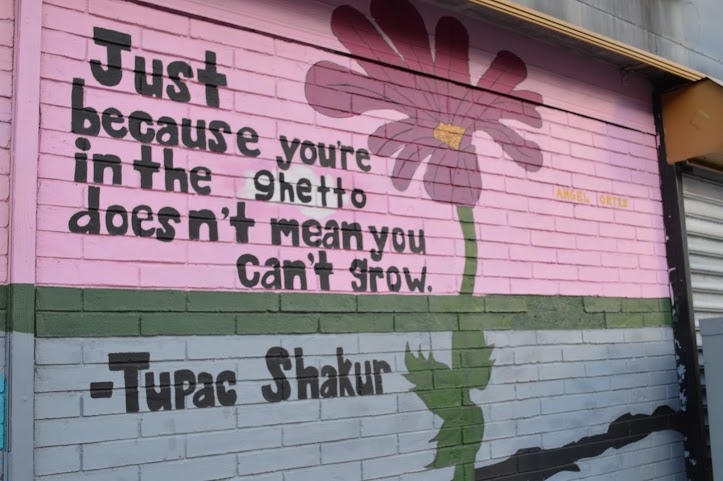 Lawrence, a city of 76,000 squeezed into about seven square miles, is an old mill city situated along the Merrimac River in Northeastern Massachusetts. Decrepit smokestacks and abandoned factories from the city’s “glory days” pervade the streets, illuminating that the struggle of poverty is an ever-present reality. Over the past couple of years, journalistic headlines such as “Lawrence, MA: City of the Damned” have haunted the city, highlighting its ubiquitous drug trade, controversial politics, extensive unemployment, and crippling public schools. So bleak is Lawrence’s image to outsiders that it has been called, “the most godforsaken place in Massachusetts.”

On my first day of work in Lawrence, I was driving down one of the city’s main roads, Amesbury Street, and noticed a group of about ten high school students outlining a painting on a brick wall.  As I pulled up to a stoplight, I rolled down my car window to more clearly see what was unfolding before my eyes. Curious about what these students were doing, I continued to drive down the same road everyday on my way home. During the ensuing weeks, these same students were there, placing unremitting effort into adding drawings depicting images of hope and success onto this mural.

It is hard to misinterpret the message that those students were trying to send to the people of Lawrence, and to all the outsiders looking in. Their artwork was created in direct response to perceptions of Lawrence that critique and judge the burden the poor have to carry, rather than look in awe at the fact that they have to carry it.

In my opinion, the most powerful image that the students created was an outline of a student in a cap and gown holding a diploma up in the air. In a city where the school system is the first in Massachusetts to be placed in receivership, the intentionality placed by the students into this image reminds each person who passes by the mural that Lawrence is in fact a city of immigrants – and not despite this, but because of this, is a city of promise.

About a month later, I again drove down Amesbury to see the mural. As my car approached the stoplight at the intersection, I could not help but feel as though something seemed a bit different. I noticed that in the top right hand corner of the mural a quote from rap artist, Tupac Shakur, had changed. The quote originally stated, “Just because you are born in the ghetto doesn’t mean you can’t grow.” The first few times I drove by the completed mural, I failed to even notice the quote. Its location in relation to other vibrant drawings and quotes would deter the average onlooker from being attuned to it.  However, on that day I noticed that the word “ghetto” had been painted over and the word “city” had been written in its place.

I waked into my high school classroom the next day without a lesson plan.  I believe this is something that all teachers must do once in a while.  I went up to the board and wrote the following, “Just because you are born in the  __________ doesn’t mean you can’t grow.” My students immediately recognized the quote from the mural on Amesbury.  One of my students blurted out, “They are trying to mask the reality! We live in the ghetto. That doesn’t mean our ghetto can’t be the city of promise at the same time.” My eyes widened at how eloquently she had articulated her sentiments. Before I could call on another student, she boldly stated, “The mural is about hope, right? So, they should put ghetto.”

The arts can foster critical thought about the seemingly inescapable problems of urban poverty. The mural on Amesbury shines light on the importance of theological aesthetics and the response it provides to a city that struggles with naming its own poverty in light of outside perceptions.  It beckons a response that demands not only a renewed focus on the theology of the poor, but also a renewed theology of naming the poor.

From the most general expectations, the students that I teach in Lawrence do not possess the material goods that are considered essential in our society. Nevertheless, they have shared with me that they do not consider themselves to be “poor,” nor do they view their Hispanic ethnicity as a “minority.”

The majority of my students are Dominican, and live in a city where Latino/a residents make up over 73% of the population.  Despite their reluctance to label themselves as “poor,” a distinctive category that presupposes societal judgment, they do not hesitate to admit that life is a struggle for their families, and that every day la lucha sigue (the struggle continues).  Linguistically, in the Spanish language the words los pobres (the poor), denotes a different meaning than it does when translated into English.  Speaking from my own experience while living in El Salvador, the term los pobres implies systematic oppression. On the other hand, in the United States being poor is diction that indicates lack of effort. In our society, poor is synonymous with stupidity, laziness, and tastelessness. Even simply being named poor is dehumanizing in that it makes people believe they are inherently worthless.

My students don’t need to say “I am poor” in order to make their reality concrete – their stories bring the truth of urban poverty to life and further illuminate the terrible comparative harm between wealth and poverty. The mural on Amesbury somehow provides a response, nestled between the conflict of how “the poor” ought to name themselves, and how the wealthy ought to name “the poor.”  It is indisputable that my students come from families of limited financial means, but labeling them as “poor” does not speak to who they truly are as individuals. While they do not have indispensible income, they are “poor”, or lacking, in few aspects of their life. They are not poor in spirit; nor are they poor in an insatiable thirst for knowledge, in a desire to achieve greatness, or in love for each other and those around them.

I have been teaching in Lawrence for quite some time now, and everyday on my way home from work I purposefully take the route that will lead me by the mural. The word “city” has since been painted over and changed back to “ghetto.”  In the midst of this Easter season, surrounded by the message of resurrection, I have become more attuned to the drawing right next to the quote – a flower springing up from concrete. It reminds me that change is imminent, and it will rise out of the people from below, as fresh and hopeful and tough and beautiful as a simple flower that has the power to crack pavement. My faith continues to be transformed by being with those who are oppressed and judged, rather than by being a detached observer looking in from a distance. I feel as though when it comes to naming the urban “poor”, there is no need to mask the reality that we all know exists, but we must present a vision of hope from within it.

Meg Stapleton Smith is Director of Campus Ministry and a Theology teacher at Notre Dame Cristo Rey High School in Lawrence, Massachusetts. In the fall, she will be attending Yale Divinity School to pursue a M.A.R. in Ethics.