The Long View of History: From Eternity to the History of Time

Photgraph by Justin Ng, Your Shot

Fox’s reboot of Cosmos: A Spacetime Odyssey hosted by astrophysicist Neil deGrasse Tyson is an experience not to be missed. Its vivid photography and animation set to an elegant scientific narration sublimely invites the general public into a state of wonder at the cosmos and gratitude for our own rare, brief, and precious existence.  There are few moments as powerful as when Tyson paraphrases Carl Sagan’s famous explanation to the Cosmos’ audience that, “the nitrogen in our DNA, the calcium in our teeth, the iron in our blood, the carbon in our apple pies were made in the interiors of collapsing stars.  We are made of star stuff.”  The beauty and power of this knowledge are decentralizing: we are moved out of a moment-to-moment, day-to-day tunnel vision to contemplate the microscopic breath of human life in the space of all history.

Indeed, in terms of the cosmos creation, we humans are but a blip on the radar of the multiverse.[1]  And yet, there are few things more scientifically certain than the reality that human activities are the single greatest cause of the destruction of our planet’s riches from the depletion and overconsumption of mineral resources to the destruction of plant and animal species as well as entire ecosystems.  While humanity currently engages in wars between 24 countries and 144 armed conflicts between militia-guerrillas, separatist and anarachic groups,[2] not to mention the structural violence of the ilk of unbridled capitalism, racism, patriarchy, and heterosexism, humanity is murdering creation.  Elizabeth Johnson is one contemporary Catholic theologian eloquently responds to the reality of ecocide and the relationship between evolutionary science and Christian belief in her new work, Ask the Beasts: Darwin and the God of Love.

The Inbreaking of God in History: Kairos from Chronos

Charles Darwin articulates his theory of evolution and the interconnection of all living beings through the grand metaphor of the Tree of Life:

“As buds gives rise by growth to fresh buds, and these, if vigorous, branch out and overtop on all sides many a feebler branch, so by generation I believe it has been with the great Tree of Life, which fills with its dead and broken branches the crust of the earth, and covers the surface with its ever branching and beautiful ramifications.” [3]

Destruction and extinction play an important part in Darwin’s evolutionary theory, indicating the effects continental breakups, asteroid collisions, and naturally occurring climactic shifts have on natural life, and illuminating how the clearing of certain species makes way for new ones.[4]  The novelty of extinction in our time is that is occurs primarily at the cost of humanity’s so-called ‘progress.’  While suffering and extinction are part of the nature of things, humanity’s activities have greatly exacerbated these realities.  How does one proceed theologically in light of this reality?

Ecologically-minded theologians articulate the ready connection between the suffering of creation and the suffering of Jesus Christ as part of the redemption of all creation.  Building on the work of Danish Evangelical-Lutheran systematic theologian Niels Gregersen at the University of Copenhagen, Johnson builds on Gregersen’s notion of “deep incarnation” that unites the crucified Christ with suffering creation and extends this to a notion of “deep resurrection” in which the risen Christ is joined with ‘the whole natural world.’[5]  If you would kindly indulge this author in a long citation from what will surely be an oft-cited passage from this groundbreaking work, Johnson articulates her notion of deep resurrection, 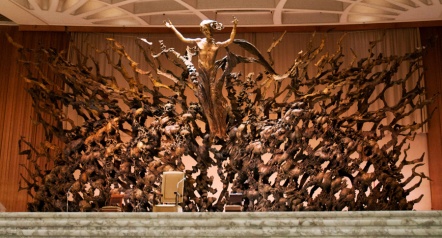 “In the risen Christ, by an act of infinite mercy and fidelity, ‘the eternal God has assumed the corporeality of the world into the heart of divine life – not just for time but for eternity.'[6]  This marks the beginning of the redemption of the whole physical cosmos.  With this realization, Ambrose of Milan could preach, ‘In Christ’s resurrection, the earth itself arose.’ [7]

“The reasoning runs like this.  This person, Jesus of Nazareth, was composed of star stuff and earth stuff; his life formed a genuine part of the historical and biological community of Earth; his body existed in a network of relationships drawing from and extending to the whole physical universe.  If in death this ‘piece of this world, real to the core,'[8] as Rahner phrases it, surrendered his life in love and is now forever with God in glory, then this signals embryonically the final beginning of redemptive glorification not just for other human beings but for all flesh, all material beings, every creature that passes through death.  The evolving world of life, all of matter in its endless permutations, will not be left behind but will likewise be transfigured by the resurrecting action of the Creator Spirit.  The tomb’s emptiness signals this cosmic realism.  The same early Christian human that recognizes Christ as ‘firstborn of the dead’ also names him ‘the firstborn of all creation’ (Col. 1.15).

“Christ is the firstborn of all the dead of Darwin’s tree of life.” [9]

In another brilliant turn, making liturgists and Christian believers hearts swoon, Johnson calls to mind the Exultet hymn, the invocation of creation at its redemption sung only once a year at the Easter Vigil:

“At the most magnificent liturgy of the year, the church is singing to the Earth!  It, too, needs to hear the good news, because the risen Christ embodies the ultimate hope of all creation.  The coming final transformation of history will be the salvation of everything, including the groaning community of life, brought into communion with the loving power of the God of life.  Because God who creates and empowers the evolutionary world also joins the fray, personally drinking the cup of suffering and going down into the nothingness of death, affliction at its worst does not have the last word.  Hope against hope springs from divine presence amid death.”[10] 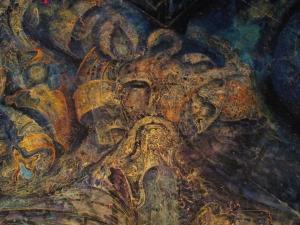 From Moments of Resurrection Reaching Forward to Eternity

We humans are remarkable creatures, being capable of both great destruction and great selfless love.  Yet, ultimately, we are not the most important thing to the world or to the universe (or the multiverse).  As much as we are creatures ourselves, the work of creation could and will go on without us.  Our existence is extraneous to the rest of creation—it doesn’t need us.  But, as believers in the divine may tell us, we exist to bear witness to and encounter the peril and salvation of creation.  This self-aware witnessing makes us unique to known creation, allowing us to recognize both the humble giftedness that comes with our merely being alive and the gravity of the sheer destruction we have uniquely perpetrated on creation.  Circling back to our mention of Neil deGrasse Tyson and Cosmos, three things stand out as ways to move forward in hope out of this martyrdom we have perpetrated on creation.

The first is to act with hope in the future, reaching out into the horizon of the unknown, with an eye to end of history and human legacy.  Tyson mentions the Voyager 1 spacecraft which travels outward into the cosmos carrying a Golden Record of a handful of humanity’s achievements including images, written greetings, and playing recordings of music from a variety of epochs and cultures.  Released into space in 1977, it is accompanied by a message from then-U.S. President Jimmy Carter which reads,

“This Voyager spacecraft was constructed by the United States of America. We are a community of 240 million human beings among the more than 4 billion who inhabit the planet Earth. We human beings are still divided into nation states, but these states are rapidly becoming a single global civilization.

“We cast this message into the cosmos. It is likely to survive a billion years into our future, when our civilization is profoundly altered and the surface of the Earth may be vastly changed. Of the 200 billion stars in the Milky Way galaxy, some–perhaps many–may have inhabited planets and spacefaring civilizations. If one such civilization intercepts Voyager and can understand these recorded contents, here is our message:

‘This is a present from a small distant world, a token of our sounds, our science, our images, our music, our thoughts, and our feelings. We are attempting to survive our time so we may live into yours. We hope someday, having solved the problems we face, to join a community of galactic civilizations. This record represents our hope and our determination, and our good will in a vast and awesome universe.'”[11]

This hope, determination, and good will in a vast and awesome universe speak to the best parts of humanity, especially its desire to discover, know, and love the good, recognizing that such good is often beyond what it is to be human or even earthly.  This inspires a humility about our place in the wideness of cosmic creation—there is so much good that is yet unknown, and we will cherish the small portion of what we can discover, spurring us on to new quests.

The second moment of hope is an outreach to those at the margins.  At the end of the first episode of Cosmos, Neil deGrasse Tyson speaks of his first meeting with Carl Sagan, then the most famous living astronomer.  Tyson’s undergraduate application to Cornell dripped with passion for astrophysics and was forwarded to Sagan, a faculty member there, who promptly invited the 17-year old Bronx native to take the bus to Ithaca, NY, on a snowy Saturday to spend the afternoon visiting his lab in the hopes of encouraging the young man’s pursuit his vocation at Cornell.  As Sagan dropped Tyson off at the bus stop to return home, the snow began to fall more heavily and Sagan gave Tyson his home phone number and offered his home to spend the night should the weather conditions suspend his travel.  This renowned, important, and busy man made time on a specific day to nurture the interests of one particular and unknown young man, teaching him forever not only the kind of scholar but the kind of person he wanted to become.  Sagan’s outreach was to a young stranger, someone on the margins of his field, and yet he took the time to nourish Tyson’s budding curiosity in the universe and his own vocation.  This is that second hope for the future: choosing with whom we spend our time and how we spend our time and ensuring that it includes those who are at the margins.

Finally, beyond these moments of reaching into the cosmos and outward to marginalized persons, what Tyson, Sagan, Darwin and Johnson remind us of is that perhaps our lives are not about us; that is, human life ought not to be humanocentric.  We exist in a delicate balance with nature and the cosmos – a balance that more recent minds remind us we are destroying.  Ultimately, while we must care for ourselves and other humans, if we cannot also care for the rest of the tree of life, all of creation, ourselves included, will suffer.  With Elizabeth Johnson, Christians are reminded that belief in the resurrected Christ means taking the long view of salvation by participating now in a deep resurrection, not just of ourselves, but the whole of creation.

Christine McCarthy is a Ph.D. Candidate in Systematic Theology and Ethics in the Department of Theology at Fordham University.  Her dissertation work is on the intersection of Catholic Social Thought and family planning.

One response to “Deep Resurrection: The Martyrdom and Resurrection of Creation in Our Day”