I grew up a Roman Catholic in Buffalo, New York with a healthy portion of Polish

ancestry.  From an early age I recognized that some particularly strange sounding names were inextricably tied to the pride and spirit of my community, and among those perhaps the most extraordinary was St. Stanislaus.  It’s the name of a beautiful church on the east side of the city, a place where I grew in faith and appreciation of my heritage—attending retreats for my Boy Scouts’ Ad Altare Dei medal, praying on Good Friday after a trip to the Broadway Market, and boisterously celebrating Dyngus Day in my young adult years.  Despite all of those experiences in the parish that bears his name, I knew little about the man whom it honored.

St. Stanislaus (1030-1079) was the first native-born Polish saint, hailing from the town of Szczepanow, outside of Krakow.  Formed in his faith by his parents and later educated at the cathedral school of the then-capital of Poland, Gniezno, he completed studies in Paris and returned to his homeland to minister to the people of Krakow.  He was renowned for his impassioned preaching and pastoral engagement of both the peasantry and nobility alike.

Upon the death of Bishop Lambert, he was ordained bishop of Krakow and quickly became embroiled in tense disputes between King Boleslaus II and the Church.  Legend has it that in order to defend the Church’s claim to a parcel of land on the Vistula River, he resurrected the former owner Piotr to testify to the veracity of the deed.  Additionally he spoke out against the extended military campaign against the Grand Duchy of Kiev, which was causing civil disorder on the homefront in the absence of the nobility conducting the king’s operations.  The king, additionally, was rumored to have used the campaign as a ploy to consolidate his power at the expense of the petty nobility, even taking liberties with the wives of the nobles in their absence.  Stanislaus appealed to the king, and prayed for his conversion.  He found some success and signs of the king’s penitence; however, the recalcitrant king stubbornly returned to his ways of self-aggrandizement.  As a result of Boleslaus’s persistent scandalous behavior, Stanislaus excommunicated him, refusing him an audience and the service of the Divine Office in his castle chapel until the king would contritely make a confession of his sins and perform public penance.  Enraged by Stanislaus’s interdict, he ordered soldiers to execute the bishop without a trial.  When his subordinates refused, King Boleslaus himself left the walls of the city in search of Stanislaus, and finding him in the midst of saying mass in a small chapel, the king slew the bishop.

The Martyrdom of St. Stanislaus

What follows is also caught up in legend and popular tradition.  Some accounts have it that the king ordered the bishop’s body drawn and quartered, to be thrown in the castle moat, whereupon it miraculously reintegrated and was guarded by angelic sentinels.  Most accounts note that Boleslaus, having recognized the gravity of his act, fled to Hungary and there did penance for the rest of his life at the Benedictine abbey of Osiak.  What is unmistakable is that the cult of St. Stanislaus immediately flourished, and he became a symbol of Polish Christianity and nationalism for centuries to come unto the present day.  Despite partitions by stronger global powers, Poland reintegrated into an independent polity with a strong national identity and historical-cultural tradition.  Despite many abandoning faith for the atheistic-materialistic ideology of Communism, many have returned to the Church and continue to grow in the faith of their fathers and mothers.  The legend and tradition of St. Stanislaus still animates the hearts and minds of those who hold Poland dear. 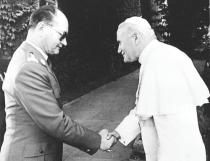 One of those finding inspiration in “St. Stan” and becoming himself a saint in his own right is Blessed Pope John Paul II, who will be canonized a saint in less than three weeks.  Despite the passage of over 900 years, St. Stanislaus finds a contemporary analogue in John Paul II, who faced remarkably similar challenges, though responding in a different tenor and tone.  Like St. Stanislaus, the then Archbishop Wojtyła collided with state authorities over the issues of church property.  Taking up the cause of the faithful in the model workers’ city of Nowa Huta outside Krakow, he indefatigably worked for the building of church there, achieving his goal slowly and patiently after decades of prayer and peaceful protest.  Confronting the avowed atheism and injustices committed by heads of state in the People’s Republic of Poland, he turned not to excommunication, but rather ‘deeper communication’ with Chairmen of the Council of State Henryk Jabłoński and Wojciech Jaruzelski, even engaging them publicly and opening dialogue with them throughout the tense years of the 1980s.  For political reasons still under debate, an attempt was made on the pope’s life in 1981 by Mehmet Ali Ağca.  John Paul II’s response was not one of condemnation of his enemy, but love and reconciliation through visits and forgiveness of his would-be assassin.  In his own way, John Paul II carried on the witness of Christ and Christ’s servant St. Stanislaus in a new way—a spirit of “new evangelization.”

This year the feast of St. Stanislaus leads me not only to reflect on the treasures of my Polish heritage, but also on the Church’s tradition of courageous prophecy in the face of political opposition.  Facing the perpetual friction between the limits of Church and state authority, both St. Stanislaus and Bl. John Paul II responded in ways consonant with their conscience and aimed at the commonweal of the community out of which they were formed and to whom they ministered.  I think this might be an important and charitable lens through which American Catholics might view the ongoing controversy over Pope Francis’s decision to confirm Cardinal Donald Wuerl to the Vatican’s Congregation for Bishops while passing over Cardinal Raymond Burke.  Both are bishops, acting out of a conscientious concern for the authenticity of the Church’s teaching and the spiritual well-being of their flocks.  On one hand, Cardinal Burke’s public recommendation for the denial of the sacrament of Holy Communion to Nancy Pelosi hearkens back to the strategy employed by St. Stanislaus, bishop and martyr.  On the other hand, Cardinal Wuerl’s refusal to deny the former Speaker of the House communion, instead inviting continued communication of the authentic teaching to her in a “culture of encounter,” echoes the tactics of the soon-to-be-St. Pope John Paul II.  Both Stanislaus and John Paul are holy examples.  The Church honors both.  At this juncture in history, however, might we be seeing a shift in our approach to preaching the Gospel?  Might the “new chapter of evangelization” marked by the joy of the Gospel, spoken of by Pope Francis, be marked also by encounter and communication rather than alienation and excommunication?