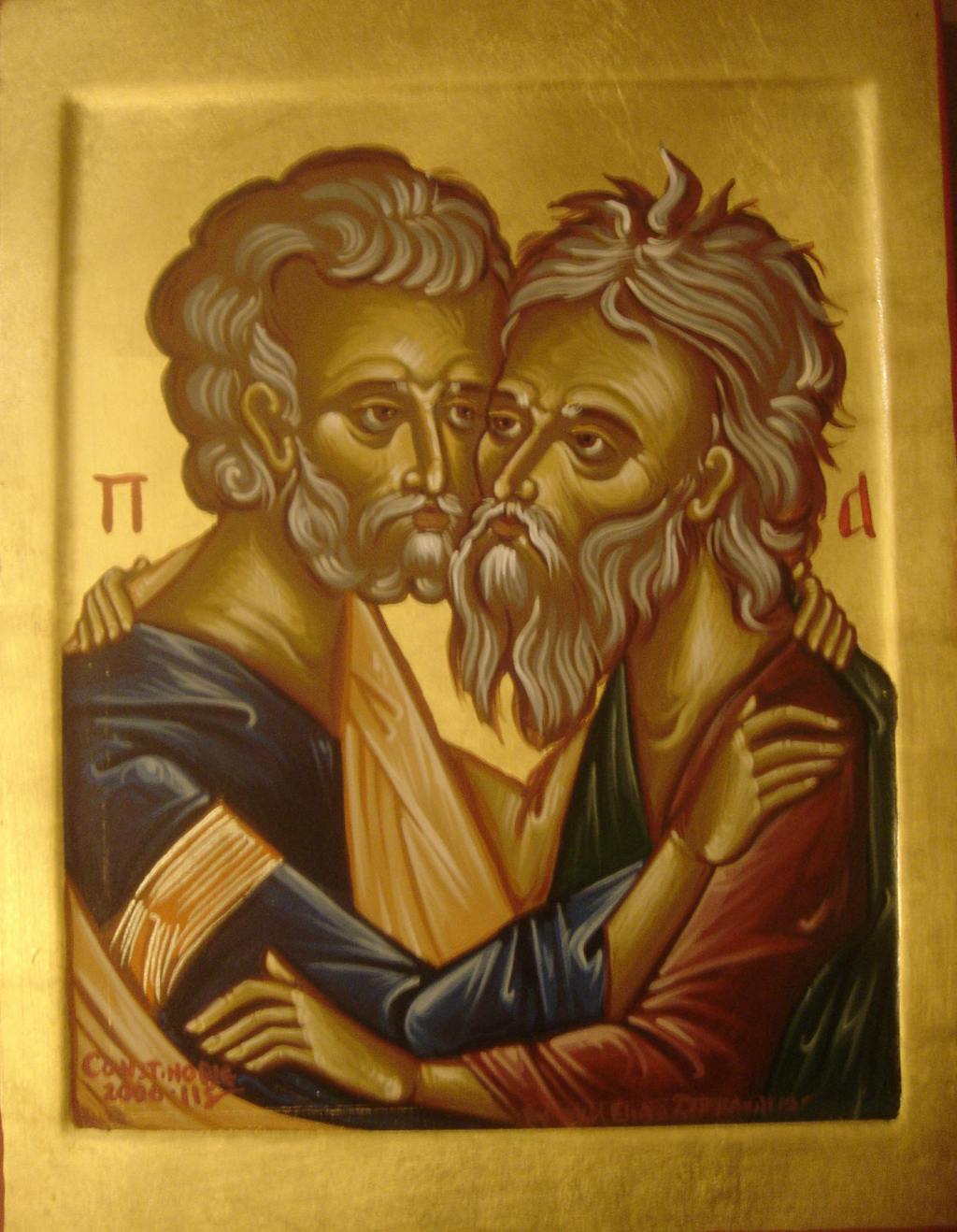 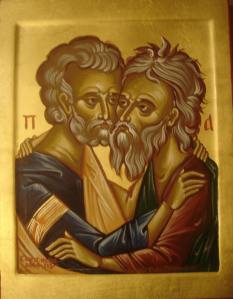 November 30 is celebrated throughout the Christian world as the Feast of St. Andrew, the brother of Peter and the “protokletos,” the “first-called.” (Cf. John 1:40). In addition to being the patron saint of Scotland and, like his brother, of fishermen, he is also the patron of the church of Constantinople, the brother saints of Peter and Andrew linking the sister churches of Rome and New Rome.

This past summer, for the first time in my life, I ended up in Istanbul not once, but twice. In May, I spent two weeks assisting in a course for Marymount students on the history of early Christianity, starting in Athens and Corinth, traveling by overnight ferry to Patmos, and then to the eastern coast of Turkey, where we zig-zagged up the coast visiting the great cities of Asia Minor. (Churches of the Book of Revelation visited: 6 out of 7. Possibly jumping a small fence in order to see some of those ruins: priceless.) We ended the course with three days in Istanbul, a city I had dreamed about visiting since I was obsessed with the siege of Constantinople as a nerdy proto-theologian in high school. Later in the summer, I had the chance to return to Istanbul for 3 weeks with a group of students from American University’s School of International Studies, who were in Turkey studying global development.

Rather than write the blog equivalent of making you see all of my travel photos, here I want to highlight three moments that I’ve been reflecting upon for a few weeks now as a way of thinking about ecumenism, interreligious dialogue, and Advent.

In May, when we visited the Patriarchal Cathedral of St. George in the Phanar, the Patriarch was not in residence, but we still had a lovely visit to the church. One of the highlights was seeing the relics of two of the greatest former patriarchs of the See of Constantinople, St. Gregory Nazianzus and St. John Chrysostom. [Excursus: These relics were taken from Constantinople during the epic cluster@#$%# that was the Fourth Crusade in 1209. You remember, the one where, to pay off their debts to the Venetians for their transport to the Holy Land, they detoured so that the army could serve as the Venetians’ muscle in an attempt to get the Emperor to pay back some debts, which ended with the Latins sacking the City and stripping it bare. Oopsy. Arguably, this fatally wounded Constantinople and the Byzantine Empire far more seriously than the Ottoman siege of the much-reduced shell of a city in 1453. It is also why Byzantinist tour guides at Haghia Sophia might still invite you to spit on the spot where Henricus Dandolo, the Venetian doge, was buried in Haghia Sophia until the Greeks retook the cathedral and promptly threw his bones to the dogs.] 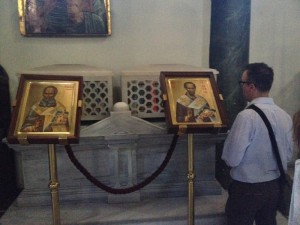 Anyway, John Paul II returned the relics of Gregory Nazianzus and John Chrysostom in 2004. More information, and a video of the events surrounding the return of the relics, are available on the Patriarchate’s website. We showed these to the students, and my colleague from Marymount, Dr. Brian Doyle, was explaining to the students who Gregory and John were, while I wandered about for a minute and discovered, next to Gregory and John, the relics of another Cappadocian Father. From nearby, then, I interrupted, “Um, Prof. Doyle? Basil the Great is over here too…” Which promptly ended the lecture so that Doyle and I could simultaneously nerd out and pray. It was a highlight of that trip to be so close to the richness that is the theological heritage of the Christian East, the “other lung” that John Paul II, in Ut Unum Sint §53, said that the church needs for the full breath of the Spirit.

I returned to the Phanar in August with the American University students, after doing a day of discussion on the role of religious organizations in economic development and political action in general, and of His All-Holiness Bartholomew, the “Green Patriarch”, on environmental activism in particular. Again, there’s more information, and a film, at the patrichate’s website about Bartholomew’s work for climate justice going back two decades. Thanks to the assistance of Fr. Nephon of the Patriarchate, we were able to have a short audience with His All-Holiness, for the students to meet him and receive his blessing. He spoke about his work for the environment and his work for ecumenism, and, in a highlight of my life, brought us back into his office behind the throne room to show me pictures of him with John Paul II and Benedict XVI, and Nathan pictures of him with Barack Obama and George W. Bush. It was comforting to see his desk was as messy, if not messier, than my own. 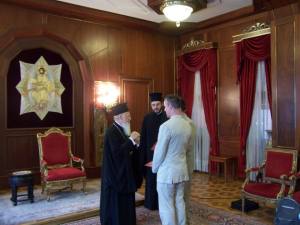 One moment that gives a great sense not only of Bartholomew’s learning but his humor was the craftiness by which he helped expose our students to the glories of Orthodox liturgy, many for the first time. At the end of the audience, he invited the students to join him for evening prayer down in the Cathedral, apologizing that it would all be in Greek, but asking them to pray for peace with him downstairs “for about 45 minutes.” Beware clerical estimations of time in general, and Orthodox clerical estimations of time in particular – prayer lasted for about an hour and a half. The students began swaying more precipitously in the choir stalls by the end, but were, I think, astounded by the richness of the liturgy as much as by its length. They did kind of stumble out into the light afterwards, though, and as the Patriarch and his entourage passed by them in the courtyard, His All-Holiness came close to them. “I told you it would be 45 minutes so you would stay,” he said, then chuckled, and moved on back to the Patriarchate. It was a beautiful moment of his humanity, his kindness, and his sense of mischief. 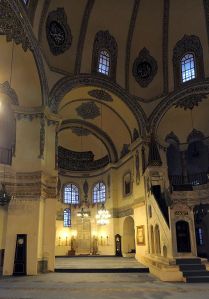 A third and final moment comes from a visit to the former Church of Sts. Sergius and Bacchus, now a mosque known as Küçük Ayasofya, “Little Haghia Sophia.” One of the benefits of being in Istanbul for a longer period in August was the chance to see some of the more off-the-beaten path sites in the city. Walking into the octagonal sixth-century structure, though, the first words that came to my mind were, “God, I wish this were still ours.” I caught myself, and recognized all the questions of identity raised by this reaction, including the question of “whose” this building was, who the “we” was that I had suddenly seen myself as part of, and who the “them” that I had placed myself in tension with. It was an indicator, I think, of how quickly, and easily, one began to feel part of a community, and not part of another community, in this city where religious identification has been such a fraught part of its history. At one point during evening prayer at the Patriarchate, the sound of the adhan, the Muslim call to prayer, pushed its way into the Cathedral, adding a dissonant countermelody to the continuing chants. Some of the students mistakenly saw this as a sign of interreligious harmony, but more, I think, caught the looks of pain, anger, and frustration on the faces of many in the Greek cathedral. For me, it was a reminder of how much religious identity, and the ways in which one’s own and others’ religious identity is perceived, differs in fascinating, disturbing ways from my experience as a North American Christian. At that moment back in Küçük Ayasofya/Sergius and Bacchus, it was a moment for dumbfounded prayer for peace, for ecumenical unity, and for interreligious dialogue.

It’s fitting that the Feast of St. Andrew falls this year on the last day of the liturgical calendar, and the eve of the First Sunday of Advent. If we keep Advent not simply as preparation for the celebration of Christmas, but as the season to pray through the gap of where we are and where God is bringing us – in other words, the season of eschatology par excellence, where we can say, with deep honesty, “Come, Lord Jesus – and fix us/this!” – then this Advent might be a time to ask for God to heal our deep wounds: the divisions in humanity between the Christian East and the Christian West, between Christians and Muslims, between people of good will, as well as the more personal wounds of those in pain because of what we have done, what we have failed to do, and what has been done on our behalf. If we are to be, in the words of Pope Francis in Evangelii Gaudium, a church that “goes forth,” then let us do so asking for the prayers of St. Andrew, and including in our prayers today the church of Constantinople, all of our brothers and sisters of the Eastern Churches, that they and we might continue to be witnesses for peace and dialogue in our violent world.