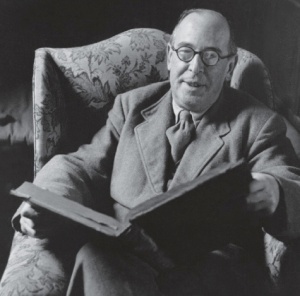 Today marks the 50th anniversary of the death of C.S. Lewis. Known perhaps best as an author of children’s fiction and as a Christian apologist, Lewis was a student of the imagination and talented in its use. But this imagination should not be confused with whimsical fantasy (which, too, certainly has its place). Boston College theologian, Michael Himes, defines the imagination as a “creative faculty,” as “the capacity to embody the abstract in the concrete.” Far from a matter of “escaping from reality,” imagination is “precisely about making things real.” In offering to his readers an imaginative spirituality, Lewis presents possibilities where they are ostensibly absent, possibilities rooted in faith without dogmatism, and commitment without stagnancy. Not an escape from the immediate constraints, weights, and fractures of human life, this spirituality makes real a way through sin and brokenness.

And Lewis, who has been described by former British poet laureate Sir John Betjeman as “breezy, tweedy, beer-drinking and jolly,” was particularly talented at presenting these possibilities in a charming, and for many even an attractive and inviting manner. While charm itself is certainly not necessarily a virtue, and can, as Thomas Cole notes about rhetoric, “make lies sound like truth,” it can also be the “means for making truth sound like truth.” In his writing, Lewis tries to charm the imagination not so as to mask lies with apparent truth, but to draw us to truth by making it real to us. Lewis imagines a world in which what we do and believe somehow matter richly and eternally, and he trusts that his revealing this world will excite our desire for it. In a letter to his friend, J.R.R. Tolkien, C.S. Lewis observes, “All my philosophy of history hangs upon a sentence of your own: ‘Deeds were done which were not wholly in vain.’” We hope, indeed, that we do not live in vain, that our struggles are joys do not simply dissipate, but are somehow signs of something deeper than even our most intimate depths.

I am personally grateful to Lewis for the part his charm played in shaping my own life. I trace my own interest in theology to Narnia and my slow but firm realization that language can speak truth when aided by our imaginations. What Lewis did for me at a young age was to offer me narratives that made the abstract doctrines of incarnation and salvation real to me in a way that both challenged easy abstraction and invited transformation. And I further believe that it is the recognition of the spiritual significance of the imagination that makes Lewis so very attractive to so many readers. In a letter to a young admirer, Phyllida, Lewis notes: “Of course you’re right about the Narnian books being better than the tracts; at least, in the way a picture is better than a map.” And while maps (and doctrines) certainly have their place, the play of our imagination invites us into the complexity and mystery of human life in a way little else can.

But to grow—to continue to respond to the ever increasing complexity and ever thickening mystery of life—the imagination needs to be fed and fostered. It is not the escape from imagination that prepares us to go forward, but rather its very activity. “When I was ten,” Lewis writes, “I read fairy tales in secret and would have been ashamed if I had been found doing so. Now that I am fifty I read them openly. When I became a man I put away childish things, including the fear of childishness and the desire to be very grown up.” We need not only to keep our imagination active as we age, but we need to stretch and strengthen it. We need to quicken its activity, keep it pliable and nimble, so that we might at the very least continue to imagine a world where faith, hope, and love speak to the deep down truth of things—and by imagining it, open to the possibility that such a world might, in fact, be real.

To imagine that this world might be real is a way of opening us to the promise of heaven. And whatever else this promise might be, it is for Lewis a promise that “no good thing is destroyed”: that those moments of healing, our life-giving relationships, and our inspiring memories are not forever lost when we die, but are, instead, offered to us anew, for us to embrace and through which to be embraced. This is perhaps why Lewis advocated re-reading good books every few years—while “we do not enjoy a story fully at the first reading” we can, with each successive pass, come to an expanding appreciation the vitality, the hope, and the promise of the author’s imagination. We can remind ourselves of the good therein and be charmed anew, all the more responsive to the possibility of its reality. To pick up a beloved book, to renew an old relationship, to remember a saving story—these open our imagination to the activity of grace and thus offer a foretaste of heaven.

We cannot always appreciate the depth and tenacity of goodness in our lives amidst the threat of evil. And we cannot now fully come to recognize God’s activity in our lives. But faith in the mystery of grace leads us to a hope that the good is somehow saved. Such a hope—when made real for us—brings with it courage, particularly the courage to love. To hope in heaven is to hope that things done in love are never done wholly in vain. And it is for teaching me that, that I thank Lewis today.

Andrew Staron is an assistant professor of theology at Wheeling Jesuit University in Wheeling, West Virginia.