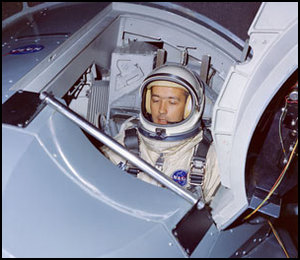 Being one of the first human beings to orbit the planet most certainly brings a unique perspective to all aspects of human life, including faith and ethics. Many of the first astronauts and cosmonauts who returned to our little blue dot in the universe brought back messages of peace and human unity. Coming from members of the military in the Cold War period, these messages of global cooperation were especially striking.

In October 1967, a committee of lay leaders from International Catholic Organizations put together the Third World Congress of the Lay Apostolate in Rome (more on that to come here), what some called “the greatest event in the history of the Church in this century” after Vatican II. Among the lay leaders invited to address the more than 3,000 participants in the congress, US astronaut James McDivitt was invited to a panel of “witnesses” along with Lady Barbara Jackson (Barbara Ward), Roberto Tucci, SJ, PT Kuriakose, president of the International Movement of Catholic Students, and Auguste Vanistendael of CIDSE.  These interventions are recorded in the Congress proceedings, God’s People on Man’s Journey.

In his address to the congress, McDivitt, the former Commander of Gemini 4 in 1965 and subsequently the commander of Apollo 9, commented on the great changes that were taking place in the world as a result of technology and communications during the period of renewal taking place within the church. Commenting on the teachings of Gaudium et Spes, McDivitt said:

“I’d like to talk a little bit about what the 2nd Vatican Council said. They talked about a one-world community, and in space it’s truly one world: when you look down from space, you don’t see the boundaries of national all you see is the boundaries between land and water. It’s really and truly just one world – and you go round it in a very short time: it makes you feel very insignificance as a person, by you know that there’s a lot to be done down there, and it should be done together…

Let me give you just one short example of how we can use space to solve problems for the whole world. The example was very close to me, because I live in Houston, Texas… It may not have been very large news around the rest of the world, but we had a hurricane in the Gulf of Mexico recently…When it came into the Gulf of Mexico, it struck just about 200 miles from where I live at the Mexican-Texan border. It did a tremendous amount of damage…However, although we lost billions of dollars in property, and hundreds of thousands of people were homeless, there were only 43 people in the United States that were killed by tornadoes which you can’t defend against –and the reason that we saved all those lives was because we knew where the hurricane was and we knew where it was going. So that is a very practical use for space.

I’d like to leave you with just a couple of thoughts. First of all, in space there a really no boundaries and it is truly the one world that the Vatican Council talks about. Second, space and technology have no practical limits for attaining tangible results. And I’d like to offer one other challenge. It is that the economic and social progress should keep abreast of technology, bit it’s a lot harder to change the economic and social standards of people, and I think we should keep the gap between them as small as possible.”

In May 2011, Pope Benedict XVI had a satellite video call with the International Space Station (video here). In their conversation with the pope, US astronaut Mike Fincke, makes a similar statement as McDivitt and uses almost missionary language:

“We look down and see our beautiful planet earth that God has made and it’s the most beautiful place in the solar system. However if we look up, we can see the rest of the universe and the rest of the universe is out there for us to go explore. The ISS is just one symbol, one example, of what human beings can do when we work together constructively.”

The experiences of McDivitt, Fincke and others who have left our atmosphere are important perspectives on the fragility of life and the need to cooperate across the imaginary lines on the map we call borders. Their experience also sheds light on the role of mission—both in a space exploration sense and in an ecclesial sense—in bringing people together for a common task. Greater cooperation and unity is possible with a common sense of mission. After all, the universe and future  task before us is far greater than the small issues that divide us today.