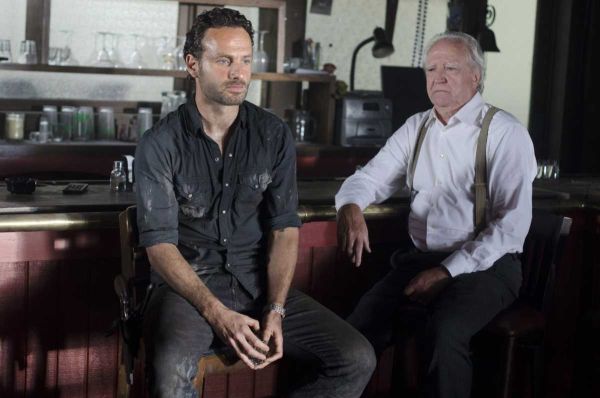 Hershel Greene: “I can’t profess to understand God’s plan.  Christ promised the resurrection of the dead.  I just thought he had something a little different in mind.”
–The Walking Dead, “Beside the Dying Fire”

For the purpose of full disclosure, I am a HUGE fan of The Walking Dead. I schedule my Sundays around the show’s 9pm time slot.  No football.  No phone.  No internet.  No work.  For an hour it’s just a ragtag band of survivors hunkered down in a prison outside of Atlanta and me, caught up in their quest to lead a life worth living in the wake of a zombie apocalypse.  It’s good TV – interesting plot lines, solid character development, and questions of life, death, and morality when social structures no longer exist to enforce commonly accepted moral codes.  And, of course, zombies.  Lots of zombies.

While zombies themselves are an apt topic for a Theological Shark Week ushering in Halloween, the popularity of shows and movies like The Walking Dead (the show’s season four premier garnered 16.1 million viewers, easily winning the ratings race in the 18-49 demographic) prompt deeper questions about our society’s outlook on life.  In any give week, TV viewers can invest themselves in a range of apocalyptic/post-apocalyptic and dystopian shows.  I offer these terms not for their theological connotations but in textbook ways – shows that deal with ultimately decisive, and often violent actions that signal imminent doom, as well as shows that create imaginary places where people live fearful and often dehumanizing lives.  In addition to The Walking Dead, viewers can tune into Revolution, and follow a group of revolutionaries fighting back against a regime that had instigated an electronic blackout fifteen years earlier.  Under the Dome focuses on a small town trapped in an invisible force field that cuts them off rom the rest of civilization. Falling Skies follows the survivors of an alien attack who are fighting back against their alien invaders.  This list could go on and on if we include movies – The Hunger Games and World War Z immediately come to mind.

Why this fascination with these types of shows?  The simple answer is that, like all TV, these shows offer an escape, a way to shut out our own lives and problems for an hour or two.  I may be stressed out about a presentation at work, or worried about money, but at least zombies aren’t chasing me.  But this begs a different question.  Why do we seek escape in violent, cataclysmic, unforgiving situations?  I fear that these shows play into our societal sense of dystopia.  We may not live in a zombie-infested world, or under a dome, or in the midst of alien invaders.  But we do live in a society rife with political bickering and stagnation, economic struggle, moral relativism, and grave domestic and global injustices.  Many of us feel powerless in the face of so much badness.

But this need not be the case.  Perhaps these types of shows can shake up our own sense of moral complacency and ineptitude.  Whom better than the saints we celebrate this week to remind us that it is in the midst of human suffering that we may best serve God?  Andrew Flescher suggests, “Human suffering serves as the conditions for the emergence of saintliness because it is suffering that necessitates the saintly work of relief” (186).  Saints exhibit a “complete and uncompromising devotion to promoting the well-fare of others” (179).  This isn’t to say that the characters in these shows are saints, nor is it to suggest that all of us must be saints in the canonical sense to love and serve God.  It is to suggest, however, that these shows offer a window into a world, like ours, where the rules for morality have become convoluted.  As such, these shows are able to develop on an ethics of character instead of an ethics of rules in which people must make choices, not by finding the rules that apply to certain situations (standard rules no longer apply!), but by developing virtue in the quest to lead a good life – the life worth living – in the midst of great adversity.  What these characters often find is that even though the world has thrown something totally unexpected at them (see Hershel’s quote above), the only way to live is not by self-interest alone but in communion with others.  This realization of the importance of the other takes the impossibility out of an apocalyptic or dystopian society and places the tools for change back squarely in our hands.

We may look to Dorothy Day, Rev. Martin Luther King, Jr., and Archbishop Oscar Romero as prime modern-day examples of saints who struggled to lead this kind of life.  Though not perfect, each of them stood up in the face of violence and injustice in a fractured society and offered a different way of living.  We may pray too for their wisdom, courage, and integrity.

Krista Stevens is a Ph.D. Candidate and Senior Teaching Fellow in Fordham University’s Department of Theology.  Her current research works at the intersection of Catholic social thought and U.S. Catholic studies.