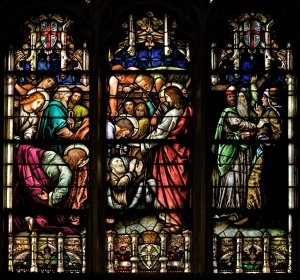 My birthday is November 22nd, which has the distinction of being (a) the earliest date on the calendar for Thanksgiving and (b) the date President John F Kennedy was assassinated. This latter fact was brought home for me when I was 8 or 10 years old. My family was out to a celebratory dinner at Max & Erma’s (which had a great sundae bar). At some point during the meal, a man in the next booth over turned to ours and asked my parents if they remembered where they were when they heard. I don’t remember the man bothering to specify what it was that they’d heard – it was clear he meant JFK. My parents did remember, and briefly shared their stories with the stranger. To me, it was an odd sort of bonding moment, a shared memory of shock and even grief among strangers.

I don’t really need to tell you what today is. I could just ask “do you remember where you were when you heard (or when you saw)?” And you would. Today Facebook and Twitter and elsewhere (even physical, not virtual spaces) remind us to “Never Forget,” as though that were an option for any of us who lived through it. I remember. That day is still vivid in my memory. I don’t really like talking about it, but I remember.

The odd thing for me is that whenever I hear “never forget,” it brings to mind the other classic saying, “forgive and forget.” It’s a piece of advice often given to children to discourage them from forming grudges (sometimes it works). I don’t offer that now because I think we ought to forget the attacks (or the grief and suffering they caused, the heroism they inspired, and the unity they too briefly grounded), but because maybe someday we can think about forgiveness.

The Scripture on this is well-known. In Colossians 3:13, we are exhorted to “Bear with one another and, if anyone has a complaint against another, forgive each other; just as the Lord has forgiven you, so you also must forgive.” Elsewhere, Jesus and Peter speak of forgiveness:

Then Peter came and said to him, “Lord, if another member of the church sins against me, how often should I forgive? As many as seven times?” Jesus said to him, “Not seven times, but, I tell you, seventy-seven times. (Matthew 18:21-22)

The implication here is not that once you’ve hit your quota of 77 times, you’re done. It’s that the exaggerated number means that we must keep trying, keep working on forgiveness. If we tried to enumerate the number of times “the Lord has forgiven” us, we would probably go far beyond 77. We can see how forgiveness is tied together in the prayer used at so many Christian services:

And on 9/11 we were most certainly trespassed against. I still remember my own shock at the surreality of what was happening. I remember seeing the plume of smoke from the Pentagon through my dorm window. I remember the fear in the faces of my freshman residents, in college and away from home for barely two weeks at that point. I remember the frustration and futility they experienced at trying to call loved ones in New York and New Jersey amidst an overloaded cell network. I remember waking up the next day not sure when, if ever, things would return to “normal.” Never forget isn’t really an option for me.

But I haven’t forgiven yet, either. I haven’t hit the 77 mark yet. I’ve tried, but I still get so angry about it. The attacks were so clearly planned and premeditated, designed to inflict immense physical and psychological damage, and so brutally, obviously evil, that it’s hard to see any humanity in those responsible. Those guilty deserve to be punished for what they’ve done, and those who plan future acts like these ought to be prevented from succeeding.

But I know that’s what Jesus is calling me to do. I’m not there yet, but I hope that, through the grace of God, someday I’ll get there.