First off, apologies for not having a post up last Wednesday. I had hoped to write about the Lenten discipline of fasting using the film Chocolat, but, as you may have heard, Pope Francis was elected last Wednesday and I got a bit sidetracked with excitement. So for now I’ll pick the Lenten film series up again, this time with Danny Boyle’s Millions

The main character of Millions is Damian, a young English boy who has just moved to a new town and new school with his brother and father following the death of Damian’s mother. Damian is presented from the beginning as a pure of heart child who is really into the saints. It begins small, with him talking about the saints during a class discussion on heroes and his excitement when their Mormon neighbors call themselves “latter day saints.” 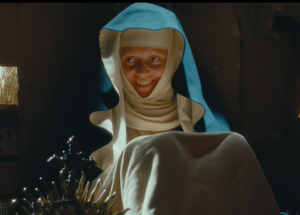 St Clare of Assisi: “It is infinite up there…absolutely bloody infinite”

But this is not all. Damian sees the saints. He first encounters St. Claire of Assisi while playing in a cardboard fort he’s constructed near the train tracks. He asks her (as he does several subsequent saints) about a recent arrival, St. Maureen, his own mother. Claire says the name doesn’t ring a bell, “but it is infinite up there.”

This encounter ends when the film’s macguffin, a duffel bag full of British pounds, flies off the train and destroys Damian’s cardboard fort. The film is set a few weeks before Britain is to go onto the Euro, and the bag of cash was part of a heist of money that was going to be burned. Damian and his brother take the money, not knowing its origin. After having a bit of fun with it, their dispositions towards the money take over: Damian wants to give it to the poor while his brother Anthony first hires schoolmates to act as security, a chauffeur, and a waiter (and later tries to buy real estate – he’s portrayed as quite savvy with numbers).

St Francis of Assisi: “You could just help the poor, Damian”

Damian is encouraged in his desire to give to the poor by his encounter with St. Francis. He then takes a group of homeless people to Pizza Hut, he stuffs money into the door of the Mormon missionaries (one of whom had previously described their community as “poor, in a sense”), and then offers to help out a man walking along the tracks. Unfortunately, this man turns out to be one of the robbers from the original heist, who is looking for the duffel bag of cash, and now he is on to the two brothers.

It’s only after Damian gives a wad of cash in school to a woman raising money for the poor of Africa that he finds out where the money came from. While he had previously believed it was a miracle from God, a member of his brother’s entourage lays out the daring heist that led to their windfall. Damian is heartbroken that it’s not a miracle, just stolen, and (as pure of heart as he is) thinks it should be returned. 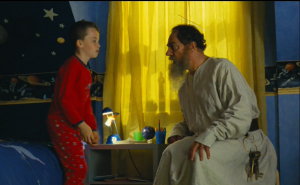 St Peter: “something that looks like a miracle turns out to be dead simple”

That evening Damian, while stuffing envelopes to send to charity, encounters St. Peter. Damian tells him about the supposed miracle and wonders whether he can still do good with robbed money. St. Peter tells him he’s been trying too hard and then retells the story of the loaves and fishes. This version, though, is the one in which each person already had a little food with them, and at first were trying to keep it for themselves. However, as the baskets get around, people start sharing what they have so that, by the time the baskets get back to Jesus, he’s surprised there’s still food left. St. Peter says he was the one to call it a miracle, but now he realizes that it really was. The take away: “something that looks like a miracle turns out to be dead simple.”

The robber soon returns, menacing at Damian backstage during the school’s nativity play, and later that night robbing his house and ruining Christmas. At this point Damian’s father finds out about the money and decides to keep it to make up for the lost Christmas despite Damian’s protestations that it’s just wrong to keep it. Damian is upset by what the money has done to his brother and then to his father and frightened by the recurring return of the robber to seek the money. He eventually sneaks out with the whole duffel bag, takes it to the train tracks, and lights it on fire. After the train goes through, Damian sees his last saint, St. Maureen.

St Maureen: “if you’ve got faith in people, that makes them stronger”

He tells his mother “the money just makes everything worse,” and she agrees: “The money makes it harder to see what’s what.” The reason Damian sees the saints, and in the end can see his mother, is because he is not blinded by the money, by possessions, or (ultimately) his own interests. He is motivated by love, especially in the form of self-gift. From the beginning, his desire to give the money away is always marked by his own vulnerability and trust in others. When he asks his mother if she’s really a saint and what her miracle was, she replies “Don’t you know? It was you.”

At the end of the film, Damian’s brother, his father, and his father’s new girlfriend each confess that they had stashed a little bit of the money to the side and toss it on the table. They all look at Damian, who takes them to his rebuilt cardboard fort (now a rocket), where they all experience one of his visions. Here, they fly off to Africa to see a community inaugurating its new well (which, previously, the Ugandan martyrs had told him could be built for only a hundred pounds). No longer blinded by what the money can do for themselves, the others can now see what Damian does.

In inviting us to consider almsgiving with a more profound gaze that transcends the purely material dimension, Scripture teaches us that there is more joy in giving than in receiving (cf. Acts 20:35). When we do things out of love, we express the truth of our being; indeed, we have been created not for ourselves but for God and our brothers and sisters (cf. 2 Cor 5:15). Every time when, for love of God, we share our goods with our neighbor in need, we discover that the fullness of life comes from love and all is returned to us as a blessing in the form of peace, inner satisfaction and joy.

In Millions, this deeper gaze allows Damian to see the communion of the saints, both those already in heaven and those still on earth. His gift of his possessions, and of himself, opens him up to encountering others in their needs, their joys, their struggles, and their hopes. Through almsgiving this Lent, may we also grow in love for the needs of others while deepening our own gaze into what really matters.

One response to “Millions: The Deeper Gaze of Almsgiving”