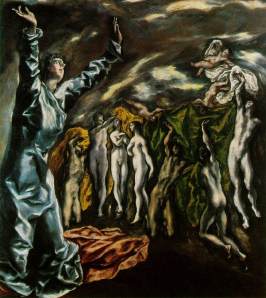 The question: “Why am I (still) Catholic?”  The answer: “Because I am a human being.”

I did actually leave the Roman Catholic Church for several years.  Because there are a host of issues over which my well-formed conscience puts me at odds with some of the more vocal members of the Roman Church’s leadership, I decided it would be most honest if I separated myself and became Episcopalian.  The Episcopal Church was extremely hospitable, and I found many Catholic refugees with stories similar to mine.  During the entire three or four years, however, something always felt just a little askew.

It was during this time that I slowly, painfully, and joyfully realized that my Catholicism was more than a set of propositions given by the Church’s leadership with which I must agree or disagree.  Indeed, I began to see that the Church is more than just the leadership that over the last two-thousand years has itself waxed and waned in its forms, in its official pronouncements and propositions, and in its understanding and use of power.  Like any human institution, it is capable of being at the forefront of amazing advances and good (e.g., creating what we know today as hospitals, standing up for the poor and weak around the world, consistently speaking about human dignity) and also capable of horrible regression and evil (e.g., sexual abuse, misogyny, heterosexism, the Inquisition).  It seems then, that the Church is not perfect, that is, it is not divine but instead very, very human.

While as individuals none of us have been able to act out of the great good and great evil that reside in our hearts on the same scale afforded the Roman Catholic Church, I am quite convinced that the institutional Church accurately reflects the saints and sinners in her midst and in the midst of the world.  I know that if my own small and very local moments of generosity, pettiness, empathy, hypocrisy, sin, self-sacrifice, bias, kindness, selfishness, compassion, greed, etc., were able to be writ large in their scope and effect, I too would be subject to the same critiques I now make of not only the Catholic Church, but of most governments around the world, of organized sports, of corporations, of the educational system in our country, of capitalism, and on and on.  In other words, human institutions are made up of human beings and thus will mirror the entire range of what it means to be human.  Thinking we can leave “bad” institutions for “good” ones can become a form of self-righteousness; a way of pretending that we ourselves are not a jumble of insecurity and grandiosity, but are instead “better” than those we now vilify as hopelessly backward, power-hungry, and wrong.  In this sense we can begin to believe that we are perfect, that we are somehow divine; we appropriate for ourselves the very image that so enraged us about the institutions and organizations we find so imperfect and messy.

None of this is in any way to reduce the need for large-scale and collective transformation of oppressive and exploitative social systems to the task of individual conversion. Nor is it to excuse or rationalize the evil done by the institutional Church.  What I am getting at here is the inextricable connection between being human and having social institutions.  As social beings we cannot escape either the need or the desire to organize ourselves, to express and represent ourselves collectively.  Thus there is a balance and not a disjuncture between “us” as a collective and “us” as individual persons.  While it is true that corporations are not people, it is also true that without people there are no corporations.  Mahatma Gandhi perceived this connection clearly.  The nonviolent philosophy that emerged from his own “experiments,” as he called them, recognizes that without individual internal change and conversion there is no external social change, and vice versa.

The nonviolent witness from Gandhi, to Martin Luther King, Jr., to Dorothy Day also makes clear that lasting change does not come through viewing the other as pure evil (whether “the other” is embodied and expressed in and through a church, a government, a person, an issue, a claim, an idea, in words, in actions, etc.,) but rather through recognizing a common humanity (or an embodied and expressed common humanity) with a propensity for both good and evil; a propensity that resides not just out there in “them,” but within “us” as well.  The practitioner of nonviolence actively seeks to resist the evil and draw out and from the good found in humanity, they (try) to refuse all temptations to the lure of purity and that illusion of separateness rightly called self-righteousness.  (See how easy it is to fall into this, have I not just made a separate, negative category labeled “the self-righteous?”  How do we best go about naming, judging, and confronting the missing good that is evil in way that doesn’t exclude – to paraphrase Miroslav Volf http://www.cokesbury.com/forms/ProductDetail.aspx?pid=438397] – but rather embraces so as to restore and summon forth what is missing?).

Thus there is no escape.  There is nowhere I can go to be untouched and unsullied by the destructiveness of humanity; save the realm of God that in terms of its fullness here on earth is both now and not yet.  Leaving the Catholic Church simply placed me in the midst of the struggles the Episcopal Church was and is undergoing in relation to its own issues surrounding lesbians and gays, women’s ordination, and post-colonialism.  I came to realize that what was askew for me as an Episcopalian is what might feel askew to those who have left or been driven out of their homelands for political reasons (although I am not suggesting that political refugees are either seeking self-righteousness or equivalent to a rather privileged white Western male switching Churches, I’m simply using a metaphor to make a point about a feeling): wherever you end up it still never feels quite like home.

For better or worse there are large aspects of Roman Catholicism that inform my sense of identity, my very view of the world.  Catholic perspectives on the sacramental nature of all reality (God communicates Godself in and through all of creation), on social justice, on the importance of liturgy, on saints and good works, all of these and more I gladly take as part of my identity.  I have also harbored Catholic perspectives destructive not only to myself but to others as well, things like homophobia or a certain triumphalism expressed in an overbearing sureness that my position is the right one.  Practicing nonviolence towards myself, I try to resist these negative aspects by bringing them into the light of understanding and compassion, and through God’s grace allowing the good to embrace and transform the evil; grace being entirely and overwhelmingly significant, necessary, and amazing here.

Having come back home to my (often dysfunctional) Catholic family, this big tent full of saints and sinners, I hope to be one more seed that by God’s grace and nurturing will contribute to a more understanding and compassionate Church.  I often fail in this because of my own anger, and at times, even feelings of hatred for those Catholics with whom I disagree.  Shamefully, I sometimes wish I had the power to silence them, disperse them, and drive them out.  I often wish they were deprived of the ability to communicate and express their views, that they would simply go somewhere else with those of their kind and leave me and my kind alone.  While I may not have that power, I know that such temptations lurk within my heart.

We are only human and I choose to confront that humanity in all the glory and ugliness by which it is embodied and expressed in the Roman Catholic Church.  I am (still) Catholic because, like continuing to identify as an American, I am a human being and there is no perfection to be found among us.  If I were to leave America I would simply confront different problems in a different country; some better, some worse.  We cannot get rid of or make perfect institutions, organizations, or governments, but we can attempt to live by that old adage to seek progress and not perfection.  May God grant us the grace to see and treat one another and ourselves as Christ sees and longs to treat us, and the grace to utterly and completely surrender to the nonviolent love of the Holy Spirit.