This past Tuesday, on the 60th anniversary of Pope Benedict’s ordination to the priesthood, the Vatican published a new, interactive, accessibility-oriented website called news.va…. 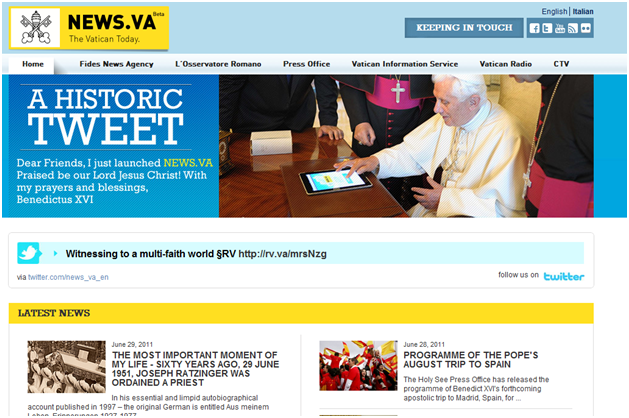 Impressive to say the least.  Note the nice twitter integration; the links to tumblr and facebook; and a video of the Holy Father using an iPad to launch the website!

The whole site is a leap forward in terms of embracing modern technology for the Vatican. But this leap forward was not entirely unforeseen.  Just in the past few months, the Holy Father has hosted a conference for Catholic bloggers, started a twitter account, and chatted with astronauts on the International Space Station. Remarkable as all these events have been, this blog post is not so much about the Holy Father’s newly found love for technology, but what it means for us as Christians seeking God.

In the first half of the 20th century, the Jesuit paleontologist Pierre Teilhard de Chardin wrote volumes concerning the Christian’s engagement with science and technology.  Across many books, Teilhard spoke of the process of becoming human, both anthropologically and spiritually.  This process is not complete until we have reached the center of life itself, the soul of the World, in Christ.  Teilhard himself lived out this belief.  The late Thomas King, S.J., a foremost Teilhard scholar, once described his focus on self-development and becoming fully human:

Like the Christian tradition before him, Teilhard saw great value in self-sacrifice, but for such a sacrifice he insisted there must be a self.…Contemporary spiritual directors have told of some directees having such a fragile sense of self that the directors must first try to give the directee a minimum of self-confidence.  When Thomas Merton [the 20th century monk, activist, and writer] became novice director, he was surprised to find this was the need of many novices.  The sons of Mahatma Gandhi became alcoholics and wife reproved him: “You wanted to make our sons holy men before they were men.” In each case, self-development must proceed self-sacrifice.  This need for self-development is a major theme in Teilhard, but it has not been a theme in much spiritual writing, East or West. (Teilhard’s Mass, 89)

This “self-development” seems straightforward enough, but it is often passed over in everyday life.  We strive after goals, opportunities, holiness, and even love without ever striving after a full understanding of ourselves.  Indeed, I would argue that this self-development is one of the main reasons why Pope John Paul II’s Theology of the Body has been so successful.  Despite its controversies, JPII’s theology urges people to become more fully themselves.  He taught that sexuality is not only an integral part of being human, but something to be celebrated rather than simply tolerated.  He integrated modern biological science in order to explain who we are and who we are meant to be in the eyes of God.  The late Holy Father was trying to teach us to be more fully human, and, in doing so, to be closer to God.

In the early 1990s, the philosopher and theologian Philip Hefner wrote that due to the existence and production of humans, “nature” must be redefined.  Discarding the natural/artificial duality that often exists in theological and philosophical writings, he argued that humanity has “conditioned virtually all of the planetary physico-biogenetic systems, so that human decision is the critical factor in the continued functioning of the planet’s systems.” Essentially, ever since humans have started to create tools thousands of years ago, we have redefined nature through our existence.  With the dawn of modern technology, nature must be understood to incorporate both the perfectly planted oak tree on a suburban street, a multi-million dollar computer lab at AT&T, and the dark and virtually untouched recesses of the Pacific Ocean.  In technology, we are not confronted with “tools out of control,” but a “fundamental, all-permeating condition of existence.” Indeed, to imagine a world without technology is, in reality, to imagine a world without humans–and, in this manner, quite dangerous. (The Human Factor, 155)

With Hefner’s thoughts rattling in our brains, I am compelled to ask: what does it mean to be human today?  I tend to agree with Hefner on many points–it seems silly to think of “nature” in some abstract manner that involves wild animals and exotic shrubbery when this is simply not a reflection of my experience with the world.  I cannot truly imagine my life without my computer, my cell phone, and my internet connection.  Even to attempt such an exercise forces me to imagine the entire world without such technologies, which in turn forces me to begin an endless cycle of “what if”s and “if only”s that lead nowhere.  Nature is what is around us; nature is everywhere.

That the Pope launched a website from an iPad is rather insignificant in and of itself.  Individual instances of technological development are remarkably fleeting, but the seeming omnipresence of technology tends to grow every day.  Think about the simple and rather likely notion that the internet will outlive every single person alive today.   Whether we like it or not, this growing interconnectedness of our everyday lives with technology affects us theologically.  How can it not?  We do not worship a purely “natural” sun-god who rises and sets with the day, nor one who must painstakingly learn how to login to an email account or use facebook.  We worship an omniscient God who is more technologically-savvy (by definition of omniscience) than we can possibly imagine.  While Jesus never used a computer and never blogged, He has interacted–by means of the Holy Spirit–with every culture, every generation, every evolution of humanity into something new.

The question we must ask ourselves, and something I think theologians and philosophers will discuss for quite some time, is how does all this technology affect my relationship with myself, with others, and with God?  This is why the launch of http://www.news.va is newsworthy, and why it isn’t.  For while it signals a long overdue technological presence of mind at the Vatican, it does not offer the Christian faithful a comprehensive way to understand the direct and indirect implications for our relationships with God.